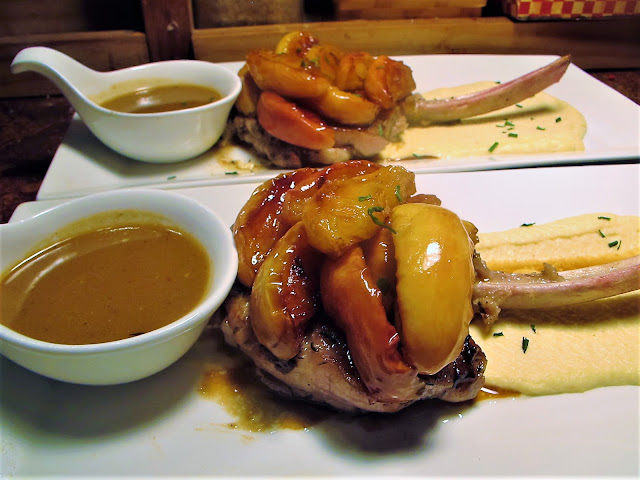 Fruits in general, and apples in particular, are very often associated with meats like pork, duck, or even game, but very rarely with beef or veal… I presume that there are good reasons for that, although I am not sure to clearly see them. Is it a question of meat color? Not really as veal is a white meat like pork and beef a red meat like duck (at least the breasts). Is it a question of fat content? But there are cuts of beef that are abundantly marbled and veal could be relatively fat too… Honestly, I don’t have the answer.

That said, I had veal chops and I had apples, and I wanted to associate them… Those two are iconic products from Normandy. I also had crème fraîche, Calvados and hard cider. If you add a couple of cheeses like Camembert, Pont l’Évêque or Livarot, you would obtain one of those gift basket gathering all the goodies of a given region, here Normandy. I ignored the cheeses, but I kept the rest, the chops, the apples, the crème, the Calva and the cider… I also should admit that this venturous proposal was commanded by a rather empty fridge!!!

As often when I feel like tempting some unusual associations, I check on Internet if this is something that has already been made. The research “veal” + “apple” doesn’t come with a tremendous outcome, but there were some examples of this association, including one that get rid of all my possible doubts or uncertainties, a recipe by the chef of the century, by the 32 Michelin star owner, by the Jedi master of the divine purée de pomme de terre, RIP Joël Robuchon himself. If one of the greatest chef ever says that you can associate veal and apples – and in this particular case, he did more than saying it since this was the theme of one recipe of his iconic TV program Bon Appétit Bien Sûr* – I will without an hesitation make a veal chop with apples.

Robuchon’s recipe was named Côte de veau aux pommes comme une tarte (veal chop with apples, like a pie). I loved this idea of treating the veal chop as a pie crust and I kept it, although I included my personal twist: my pie will be a tarte Tatin! I also associated with a celeriac root purée, prepared in a similar way as… Robuchon’s potato purée, the earthiness of which will balance the sweetness of the Tatin type apples.

* An anecdote that Joël Robuchon himself shared with me when he participated in my first Gourmet Voice festival as its “guest of honor”. As I was telling him that I was having problems with Condé Nast (their judicial officer even showed up during the festival) with the name Gourmet Voice, too similar in their view to their magazine Gourmet (to be honest, the cursive font was also quite similar), he reassured me by telling me that he had the same problem with his program, initially named Bon Appétit, which he had to rename because Condé Nast thought this was competing with their eponymous magazine… As if Condé Nast had registered all the food-related French words!!! 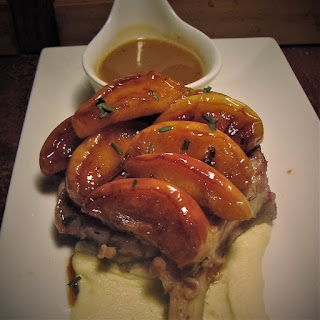 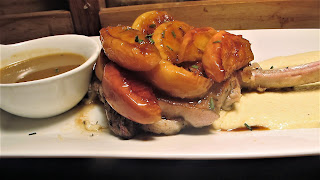 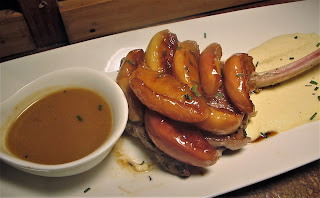