A chef, a dish? Not even a dish, a simple vinaigrette. But what a chef! The genius Alain Passard. Passard is this Parisian 3-star chef, who has become a specialist of the vegetable cuisine more than 20 years ago, while he was then a highly recognized for his art of roasting the meat ; “highly recognized” means that he already had 3 Michelin stars. This is when he realized that his “traditional” way of cooking didn’t bring him any pleasure and that he was somehow in a dead-end or, to use a French word, in a cul-de-sac. In fact, he went through a depression too.

But where his colleagues of the very select club of legendary chefs, Joël Robuchon* or Alain Ducasse, decided to cure their blues through the development of a culinary empire, flying all over the world to open new top end restaurants in Tokyo, Hong Kong, Las Vegas… Passard follows another route. First of all, he could not imagine doing something else than being in person in his kitchen every day… in fact, and because of this will, 5 days a week. Indeed, his restaurant, L’Arpège is closed on Saturdays and Sundays, as the chef considers that, in order to deliver the best possible quality, he and his team have to rest two days a week, to rest and as far as he is concerned, pursuing his other passions, painting, sculpture, playing music… As he is not only an artist in his kitchen…

Thus, almost 20 years ago, Passard made a 180-degre turn. He abandoned almost all his “proteined” dishes on his carte, keeping only a few of them like his legendary Poulet au foin (chicken cooked in hay), and decided to promote a cuisine essentially based on vegetables. In line with this strategic decision, he took over three vegetable gardens at a 2-hour driving distance from Paris, to secure his everyday supply of fresh and organic vegetables…

But the real star of this salad, and of the tomato salad featured below, is its hidden component: the vinaigrette. This dressing is literally to die for, perfectly combining three complementary ingredients: honey, lime juice, and olive oil. And its recipe is as simple as ABC or, more accurately, as 1, 2 and 4 – see recipe below.

You obtain a very unctuous and creamy vinaigrette, with a great balance between the honey suavity, the lime acidity and the olive oil roundness... This is where lies the most difficult part: resisting from eating everything one teaspoon after another! You can make a certain quantity in advance, but it shall not be kept in the fridge (because of the oil and the honey). And according to Passard, you can serve it with salad, but also with meat (duck, pork), fish, vegetables, and why not a fruit salad or an ice cream, for instance?
My personal twist here? I used the liquorice oil in which I soaked the red beets (with some beet leaves) to make the honey vinaigrette.
Oh la la, as they say in the US!

I also show pictures of an heirloom tomato salad including the same vinaigrette.

* Robuchon even decided to give back his Michelin stars… before coming back in the “star war” with an incredible success since, at his death in 2018, his restaurants had 32 stars in aggregate, a world recod far ahead of Ducasse and Gordon Ramsay. 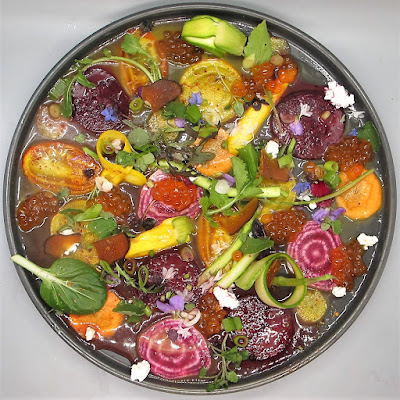 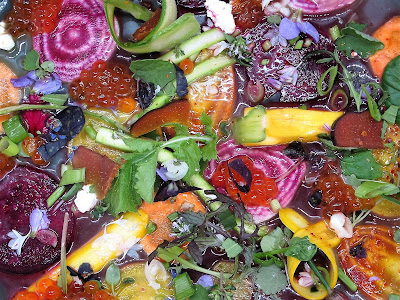