A LEGEND AND A DISCOURSE: LES FRITES 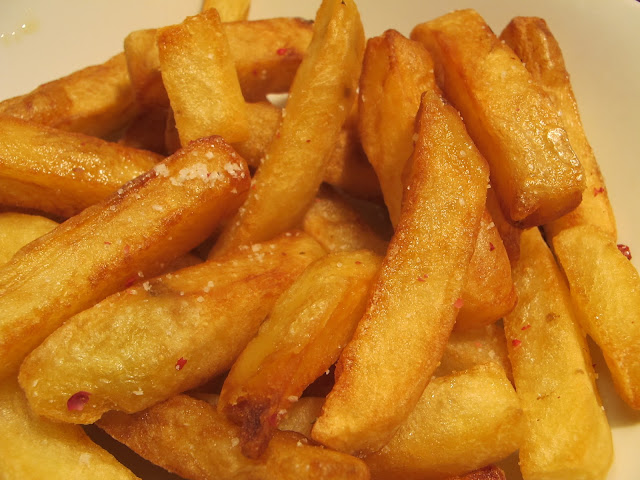 French fries… By the way, are they French or Belgian?
Let’s first kill a legend. French fries would not be French, but Belgian… Are you sure? First, it should be noted that France and Belgium are two close neighbor countries, sharing a fluctuating border along the ages and, at least for the French speaking part of Belgian (Wallonia) a parallel History, and having a lot of stories in common. Therefore, given that, even if Belgian, the French fries would be from Wallonia, attributing the origin of French fries to one or another country is indeed just a question of miles within or beyond a changing border…
One of the stories is that French fries were invented in Belgium, at the end of the 17th century in the area of Namur or Dinant (to illustrate the above, Dinant is only 15 miles far from the French city of Givet). People there used to fish smelts or the likes, and to fry them. But during one particular tough winter, as the rivers and lakes were totally frozen, they could not fish their usual catch… Then, you guess, they had the idea to cut potatoes in little sticks so that they look like smelts and to fry them. The fries were born. You bet! As per the records, potatoes only reached those areas in the middle of the 18th century. Too bad and good try!
Another pro-Belgium version would be that fries were invented in Belgium during the 19th century where a few recipe books from this period referred to the new practice consisting in cutting potatoes in small sticks instead of slices before frying them. The sticks were supposedly more elegant than the slices… Why not?
That said, the presence of “French fries” was already proven in Paris during the French Revolution, therefore at the end of the 18th century, when they were sold in small shops on the Paris bridges. Hence the term “pomme Pont-Neuf”, after the name of the oldest bridge (don’t trust its name) in Paris. Pomme Pont-Neuf designates now very thick French fries…Thus, since I am obviously very impartial, I solemnly declare that the French fries are... French!
But in fact who cares? They are just universal, stateless, but not tasteless!

French Fries… Discourse on the method
… or rather the methods. There are plenty of recipes or methods for cooking French fries. Deep fried, once, twice, thrice… Which temperature(s)? In oil, beef tallow, duck fat… Blanched, not blanched? And also sautéed, baked… For instance, in Belgium, they usually don’t blanch them, but deep fry them twice in beef tallow instead of frying oil. As you may have understood, the French fries area an institution there, Belgium has even placed a request to add fries to the UNESCO Intangible Cultural Heritage List! So, no doubt that the tallow method is an excellent method, I can testify for it. But since this is such a vital issue, scientific research has been conducted to identify once for all the best method. And the result is: using Bintje potatoes, cutting regular fries, not too small, nor too big (between allumettes and Pont-Neuf), blanch them, dry them, and deep fry them twice in vegetable oil, first 5/6 minutes at 320F then 2/3 minutes at 375F.
Let's kill the potato type first. As there is no Bintje in the USA, or at least I haven't find any so far, the closest types to Bintje are Russet and Yukon. Given that a good French fry is one that is tasty, crispy outside and soft inside, I have tried and compared both types and came to the concluson that Russet and Yukoon are equally tasty and crispy outside, but that Russet remain softer inside (for the same cut and the same cooking process) than Yukon. Russet potatoes are also generally longer than Yukon, which is an advantage if you want long fries. This is why I prefer to work with Russet when making fries (I reserve the Red Skin or the Yukon species for my potatoes with bacon family recipe and the fingerlings for my Robuchon-inspired mashed potatoes).
Coincidental or not, this "scientific" method is also the method more empirically used by a great number of “grands chefs” in France… At my humble level, I have also made my own empirical tests and this is also the technique that I have adopted, just tuning it, based on my own discoveries and also, mainly, adapting it to the potatoes found in the USA and to my non-professional equipment - understand: my home cook deep fryer.
In a nutshell, it consists in blanching first the fries in salted boiling water, till their edges start to disaggregate, which gives a special crispiness when fried, letting them dry, then deep frying them three times while respecting a certain leader time between each bath. Why triple frying? Why three and not two as per the scientific test, or four, since four is more than three? Honestly, I tried the single, the double and the triple frying. I didn’t try -yet?- the quadruple frying, for practical reasons first, but mainly because I don’t feel it could further improve the results of the triple frying… In fact, as compared to the single or double frying, I don’t think that the triple frying presents a significant advantage for the “out of the bath” fries, since, of course, the time of frying is adapted to each method. But as I said above, I have a decent, and cheap, home cook fryer, with its limits. For instance, when the fries, even in small quantities, are plunged at the theoretical maximum temperature of 375F (in fact, I suspect this is less), the bath temperature drops drastically and is very long to get back to a high level temperature, longer than the recommended time of frying. My feeling, once again more empirical than scientific, is that this “effect of surprise” is important. Adding a third one has proved, in my case, very effective. Once again, not when the fries are just removed out of the fryer, but 5, 10 or 15 minutes later. In fact, this is the major problem I have found with restaurants serving fries and this why I rarely order fries; the time they are served on your table, they become mushy. Not mentioning this restaurant compacting a great quantity of fries in a deep bowl… steamed fries!!! Adding a third frying bath maintains the fries crispiness longer: up to 15 minutes.. but I didn’t really test it beyond… All gone! And this is in fact the great inconvenient of this method. So popular as I am asked to make them every day! 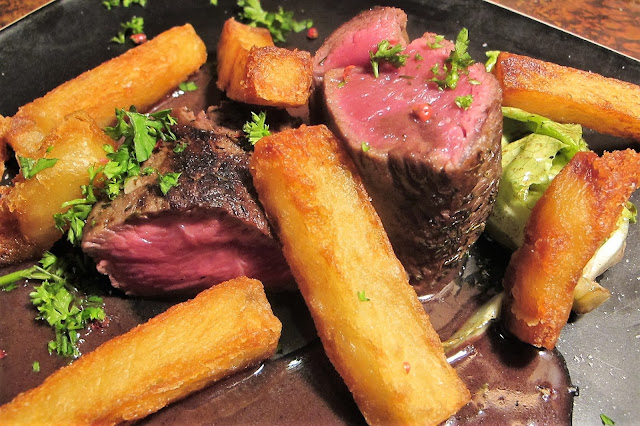