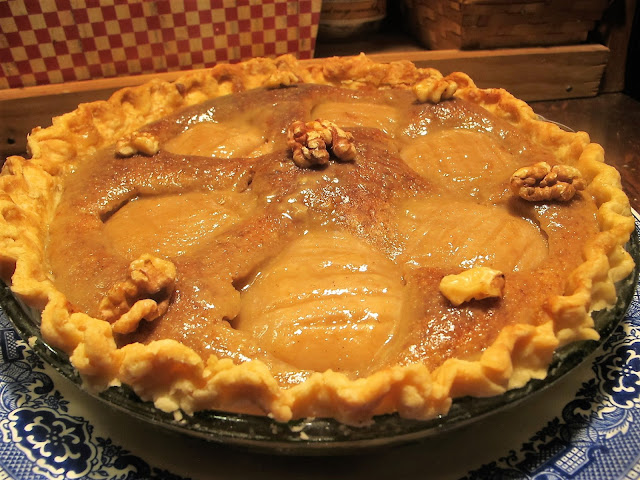 The Tarte Bourdaloue is a famous French pie, named after the Bourdaloue street in the 9th Arrondissement of Paris, where was located the pastry shop that created in ~1850 the pie! Ftr, Bourdaloue was also a Jesuit preacher during the 17th century, famous for the extreme length of his preaches... hence, the second use of the name Bourdaloue, a chamber pot said to relieve his "followers'" bladders. It might be the origin of the English term "loo". But this has nothing to do with this delicious pie!
The pie is simply made of a crust, an almond cream and pears.
The crust is a courtesy of Ardis Billey. Superb. Btw, do you see how its border shape fits well with the walnuts?
The almond cream is here, in fact, a walnut cream, as I didn't have almonds. But it works very well too. It's a 5/5 recipe: 100g of flour, 100g of sugar, 100g of soft butter, 100g of eggs (i.e. 2 eggs) and 100g of almond (walnut) powder (thanks Vitamix!), added and mixed in this order. My personal touch, I added a pinch of salt, and since Ardis's crust was high, a 1/2 tsp. of yeast to help the walnut cream (which is in fact more a biscuit, although cooked once, than a cream) to rise up, which it did very well.
The pears (3 pears here) are poached in a syrup made of water, sugar, star anise and vanilla beans. Then, they were cut in halves, placed on the cream, and slightly cut on the top.
The whole baked at 350F for around 45 minutes or when the cream takes a nice golden brown color.
Another personnel touch: I made some kind of a coulis with a fourth pear less presentable after poaching than the third three and with the pear skins cooked in a little bit of the syrup, and I brushed it on top of the pie.