I told in a previous blog the story that has long prevailed about the origin of the Tarte Tatin. The mistake -or rather the mistakes, since there are several versions, which is already slightly suspicious- madein 1898 by the Tatin Sisters, Caroline and Stéphanie in their successful restaurant of La Motte-Beuvron in the center of France, when preparing their iconic apple pie. That is the legend.
Now, even if the Tatin sisters were probably real persons, the real story is that this pie was created in 1926/1927 by a pastry chef. But here again, there is a debate about who made it first, either the legendary chef Curnonsky or the pastry chef of the famous restaurant Chez Maxim’s. In any case, whoever invented the Tarte Tatin, the Tatin sisters’ story was just invented either to make a joke or to make “the buzz”, and to take advantage of the credulity, if not the stupidity, of the consumers…
So, serendipity or stupidity?
Make your choice. Personally I prefer to be “stupid” and to believe in the legendary sisters in their restaurant of La Motte-Beuvron… It is like Santa Claus, there are some legends that are comforting to believe in.

and a revisited recipe

Like its legend, the Tarte Tatin has been the subject of many revisits, its way of cooking, its shape, its ingredients. For instance, there are versions with pears, mandarins, and even turnips (I made it, delicious!). Here, I more or less follow the recipe by pastry chef William Lamagnère, which consists in cutting the apples in ribbons and to roll them together for a visual aspect that is astonishing. Here is the recipe. For the pastry, I used the pâte brisée used for a pâté en croûte, including around 1/5 of chestnut flour, a good match with apples.

As good as beautiful! 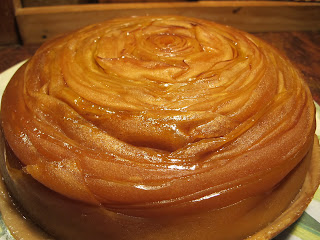