TATIN TATATATIN on the air of the Beethoven 5th 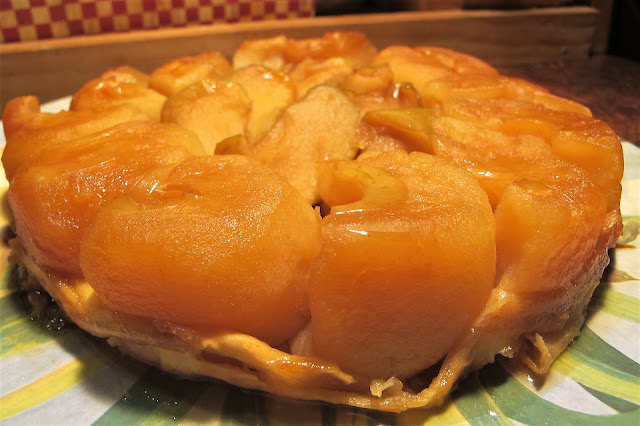 The Tarte Tatin is said to have been invented by the Tatin Sisters, Caroline and Stéphanie, in 1898, in La Motte-Beuvron, a small city in Sologne. Sologne, is a marsh and wood landscape area near the Loire valley, in the center of France, where the French kings used to go hunting.
But there are different versions of the story (or legend?) but all are about a mistake or an omission. The Tatin sisters were holding an hotel-restaurant in La Motte-Beuvron and they were famous in the area for their cooking talents. So, their restaurant was always crowded as it was the rendezvous of many hunters. So, a day when the two sisters were a bit more swamped than usual, Caroline, or was it Stéphanie? -here again the versions differ- forgot to prepare the dessert and in her precipitation to fix this omission, she made an apple pie, their specialty, but forgot to put the crust. When she realized it, it was too, late, so she just put the crust on top and had the brilliant idea to flip it over before serving. As you anticipated it, this was a success.
Another version is that Caroline or Stéphanie dropped the apple pie on the floor. As there was no time to prepare a new pie, she just put a mold on it, which resulted in having the crust topping the apples, and she baked it like that. Another version mentioned that the initial crust was burnt and the sisters had the idea to place another crust on top of the apple…
That is the legend.
To come back to “my” Tarte Tatin, it was classically made. I just used a “pâte brisée” (pie pastry) while the choice could also have been a “pâte feuilletée” (puff pastry) or a “pâte sucrée” (sweet pie pastry). I cut my apples only in halves and placed them “standing up” to have the thickness that characterize the tarte Tatin, in fact caramelized apples and subsidiarily, a thin crust. I used Golden apples too, by far not my favorite apples, but I should admit that they are great in the Tatin. My only “twist” is that I used apple cider instead of water to make my initial caramel… 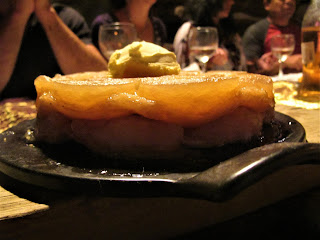 Sometimes, I also made the recipe created by Christophe Michalak. Michalak is a creative pastry chef who has renewed the pastry codes. If you go to Paris, don't forget to visit one of his Michalak Take Away shops (have a look at what he is doing, given that he changes his carte every day http://www.christophemichalak.com/).
Coming back to the tarte Tatin, his recipe consists in poaching the apples in butter and sugar. Ftr, for 4 apples, I used 1/2 lb of butter!!! I also add vanilla and a very tiny bit of cinnamon. The result is amazing as the apples are melting, buttery, sweet... Just a delicacy by themselves. And y personal twist, sometimes like on this picture, is to double the layer of apples!!!
dessert pie