A STAGE*, TWO DISHES, A FLIGHT OVER THE OCEAN: ARDÉCHOIS HAMBURGER 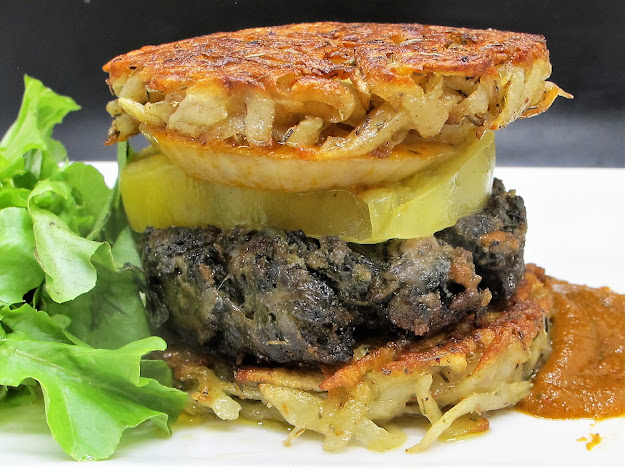 The Tour de France was in Ardèche yesterday. Ardèche is a French département located on the Rhône right bank (it produces wines under the names IGP Ardèche, AOC Côtes du Rhône and AOC Côtes du Vivarais) and named after the magnificent river that crosses it. Canoeing the Ardèche river canyon is a must do if you are in the area... or not! This small mountain region has remained untamed and harsh as soon as you get away from the Rhône river and by many aspects, it reminds me of Corsica for its wildness, its traditions and... its chestnuts.
Alas, this is not yet the chestnut season! So, I decided to cook two other regional specialties, the crique and the caillette.
I love to take two very traditional French dishes and to cross the Atlantic ocean with them!
* During the Tour de France, combining two of my passions, biking and cooking, I will try to present (almost) every day a recipe from the route followed by the peloton.
caillette crique