A STAGE*, AN ICONIC DISH: CASSOULET 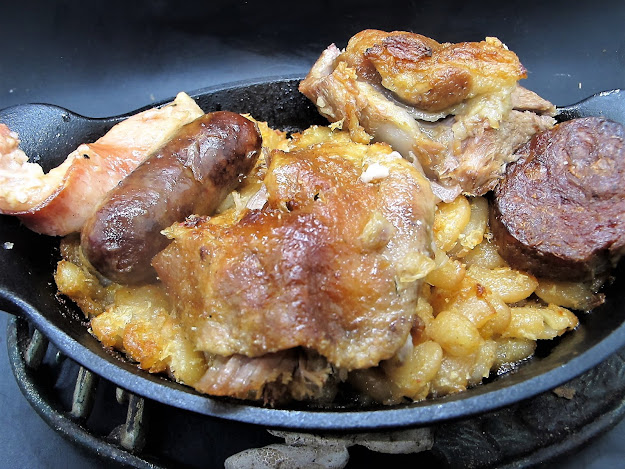 The Tour de France's 7th stage (already one week!) arrived yesterday in Lavaur (Tarn), a small city located 25 miles NorthEast of Toulouse and 35 miles North of Castelnaudary... Needless to say that we are in the heart of the "country of Cassoulet"!
In fact, there is a war between Castelnaudary, Carcassonne, Toulouse and other cities or villages, each of them strongly claiming that its recipe is the genuine one. Pork, duck, no duck, lamb, even partridges or other game birds, Tarbais beans or Lauragais beans... Personally I like the one with the duck confit, of course!
The legend is that the first cassoulet was “invented” in Castelnaudary (to pronounce "Castelnaudarrrrry" with a "rocky" accent, a bit like a torrent loaded with stones tumbling down the Pyrenees mountains) during the 100 Years’ War (14th and 15th centuries). As Castelnaudary was besieged by the English troops and its inhabitants had to face famine, the city’s bishop asked all the Chauriens (i.e. the inhabitants of Castelnaudary, sic) to bring all food they have left and to put everything together in a big pot-pourri stew, something that we would call now a clean-out-the-fridge meal. Revigorated by this meal, the Chauriens found the energy to push back and defeat the English troops… Nice story reminding the Adventures of Asterix and proving once again the virtue of food, isn’t it? Except that there is no historical record of such a military feat. Castelnaudary was effectively attacked, sacked and pillaged by the Black Prince in 1355 and its inhabitants massacred. No sign of magic potion and fierce resistance here! But at least it proves that Cassoulet is like a " Pot Luck" party, where everybody brings or puts what they want!
Whatever you put into it (with some limits though!), there are some rules to follow. For instance, the genuine way to cook it doesn't call at all for breadcrumbs to make the beans top crust, but it is made naturally. In fact, the secret is a delicate process consisting in oven-roasting the cassoulet, ensuring that it doesn’t dry up inside by breaking up the crust (another legend says that the crust should be broken 7 times, like the trumpets in another siege, that of Jericho) and regularly adding some broth. The dish itself, the "cassole" (hence the name of cassoulet) is important for the purists, as its material (terracotta) and its shape (flared) are said to enable this “crust-making” process.
Here is my Tour de France cassoulet, featuring pork shoulder, duck leg confit, ventrèche (pork belly with its rind), Armagnac duck sausages, garlic sausage, and Tarbais beans (from D'Artagnan.com)
* During the Tour de France, combining two of my passions, biking and cooking, I will try to present (almost) every day a recipe from ) the route followed by the peloton.
Cassoulet