A STAGE*, A DISH: THE VOSGES STONE SOUP 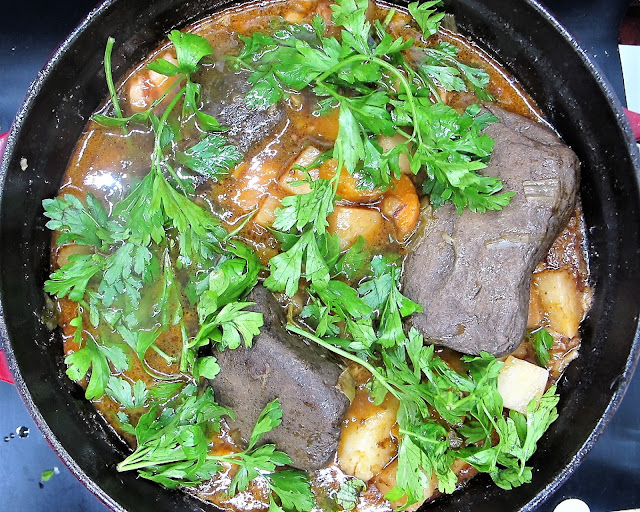 Before being a dish, the “stone soup” is a legend with many versions from Hungary, Russia, China, France, Portugal… The “synopsis” is always about the same, some kind of a potluck recreating social links, to use a contemporary language, where the “hero” of the tale, i.e. either an old babushka, a poor soldier back from war, a trump, a monk, a pilgrim, and even a wolf, has had no food for a couple of days and is starving. But the recipe varies, and the end (and the moral?) differs as well depending on the version! The most positive one sees our hero, let’s the very old babushka of the Russian version, arriving in a village:

-These people stay at home, they don't know how to be happy, she said. This is a place for me!

The babushka collected small wood branches to start a fire. A little boy showed up:

-What are you doing? he asked

-I make a pebble soup, she replied. But I'd need three large round stones. Do you know where to find them?

The little boy went to pick three beautiful pebbles in the river and handed them over to her.

-These stones will make an excellent soup, she said as she put them in the water. Too bad that we can’t make a big one in this tiny bowl…

-My mother has a big pot! said the boy. I'm going to get it!

As he took the pot, his mother asked him what he was doing.

-There is a babushka in the village. She makes a stone soup...

-A stone soup? she asked, I'd love to see that!

The mother followed her son to see the babushka cooking stones. Then, intrigued by the scene, a few villagers went out from their homes, joined by a few more who became many more…

-Of course, said the babushka, the real pebble soup must be seasoned with salt and pepper, but I don't have any...

-I've had some! said a villager.

And he came back with salt, pepper and some other local herbs and spices.

The babushka tasted the soup:

-The last time I had stones of this shape, I added a few carrots, it was delicious!

-Carrots? asked another woman. I think I have a couple of them at home...

And the woman came back with a basket full of carrots... as well as two beautiful cabbages, which she hurried to throw into the pot.

-Hum, sighed the babushka. What a pity I don't have onions, it would be so good!

-Oh yes! said one farmer. I'm bringing back some!

And as each of them progressively contributed to the soup, this one with leeks, this other one with bacon, a third one with sausages... the soup ended up with such a delicious smell as the babushka officially declared:

-The soup is ready!

All gathered around a large table, bringing bread and wine. What a feast! The village had never seen something like this before! And as they were eating, they chatted and laughed together. And when their stomachs were full, they sang and they danced till late at night! Happy and full of joy… thanks to a few pebbles and an old, old babushka…

There are also more mercantile versions where a tramp eventually sold his stones that magically made a soup… thanks to everyone’s contribution… Or a more ambiguous child’s tale -this is often the case with stories aimed at children- where a wolf makes a soup with contributions from a chicken, a duck, a pig… and where one expects another more dramatic ending…

Although, as testified by the variety of versions of the eponymous tale, the stone soup is known in many regions all over the world, this is a specialty of the Southern Vosges mountains and the pebble rolled and shaped by the Mosel river between Bussang and Épinal are said to be the best for the stone soup. And don’t think that I might be biased because I spent multiple vacations there in my grandparents’house!

In fact, stone soup  is just a traditional vegetable soup, calling for potatoes, turnips, carrots and leeks, completed by any seasonal vegetables or legumes, as well by, if available, a piece of bacon, a sausage leftover or a beef bone… A flat stone, or a set of several smaller round and flat stones (there are two chapels), is put on the bottom of a rather large pot. As the soup simmers during long hours (except the potatoes and possible sausages added near the end), the constantly “trembling” stone acts like a pestle, crushing/rounding the vegetable edges, which thickens the soup texture and diffuses the flavors. Naturally, each cook has his own recipe, and each day its own combination of veggies: don’t forget that the soup genesis is a potluck!

As for the stage, this was a rolling stone too. This was a relatively short time trial (22 miles only) finishing by a 4-mile steep ascension of the Planche des Belles Filles (literally the “beautiful girls’ board”), a ski resort located only 5 miles, as the crow flies, from the Bussang path where the Mosel river, you remember this river rolling perfect soup stones,  has its source. As Roglic’s victory appeared quasi-certain, his very young countrymate  Pogacar totally reversed the situation in what was by far the most exciting episode of this rather boring Tour de France. 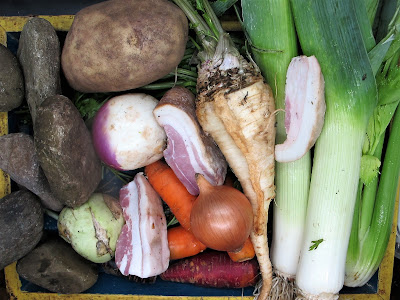 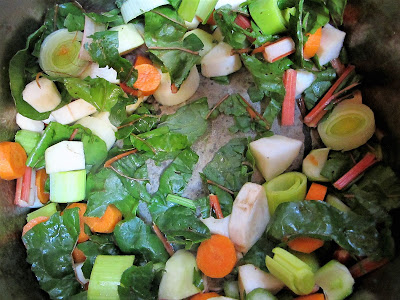 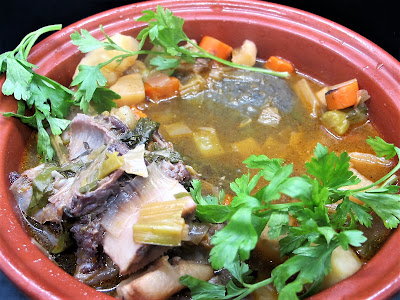