A STAGE*, A DISH: A CHICKEN TO END THE WARS OF RELIGION 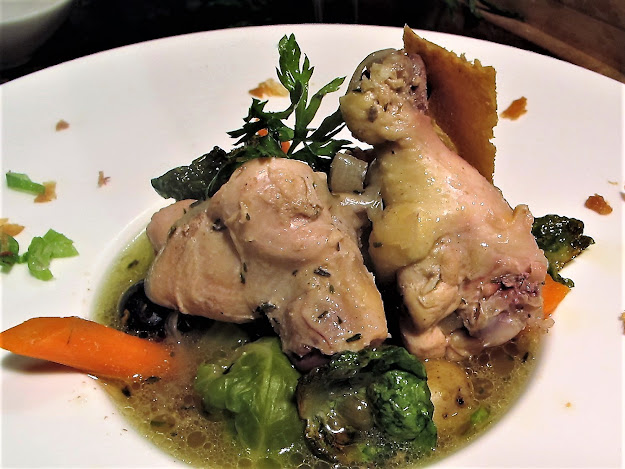 Eighth stage, from Pau to Laruns in the old French province of Béarn, with 4 pathes to climb... Despite the fabulous efforts made by a young Swiss rider, Slovenian riders finished first and second again... This is just amazing for such a small, and beautiful, country taht I had the chance to visit several times. Maybe should I have cooked a Žganci instead of this Poule au Pot (literally: Chicken cooked in a pot)?
Poule au pot
Poule au pot is the city of Pau's iconic dish, thanks to its promoter, the Béarnais (yes, like the sauce!) king Henry IV. Furthermore, it is also deeply embedded in the roots of the “History of France” as all French pupils learn it at an early age. Not because of its culinary attributes that are obvious, but because it symbolizes the end of one of the darkest periods of the France’s history and the opening of a more positive and glorious era…
“If God keeps me, I will make sure that no peasant in my realm will lack the means to have a chicken in the pot on Sunday!”
This sentence was said by the “Good King Henry”, the abovementioned Henry IV, at the switch between the 16th and the 17th century. While most of the French kings, including the “Saint King Louis IX” (his crusades against the Infidels were nothing but wars) are known for the wars they conducted, successfully or not, the Good King Henry has remained in the French collective memory as the king who ended the French Wars of Religion. Those were a series of violent civil wars that took place in France during the second half of the 16th century and that shattered the country in two camps, the Catholics and the Protestants. They culminated with the Saint Bartholomew’s day’s massacre when thousands of Protestants were killed during their sleep, the night of August 24, 1572 in Paris and in other cities. Altogether, Wars of Religion are said to have caused 3 million deaths during this period in France.

A chicken in a pot to end wars of religion... An idea for the present time?

Henry IV, a descendant of the Saint King’s youngest son (house of Bourbon… no, it has nothing to do with the liquor!) was to become king of France when his far cousin, Henry III, the descendant of the saint king’s eldest son (house of Valois) died in 1589 assassinated by a fanatic monk. But although he was originally baptized under the catholic rites, he was raised in the protestant faith, he fought in the protestant camp and he was excommunicated by the pope. Because of this "background", he was denied the throne of France by the powerful French catholic church. He then decided to convert to Catholicism (his famous saying: “Paris is well worth a mass”) and he was able to be crowned king of France in 1594. Then, with his prime minister, Sully, he worked hard to reestablish the civil unity, to redevelop the economy (hence, the “poule au pot”… I don’t forget it) and to promote tolerance by issuing the Edict that set up the principle of freedom of religion while granting the protestants with some privileges aiming mainly at guaranteeing their security. Henry IV was assassinated in 1610… Somehow, a destiny similar, almost three centuries ahead, to Abraham Lincoln’s…
My agnostic Poule au Pot
I added my personal twist to the classical “poule au pot”, hoping that this would not trigger… another "war of religions".. It is true that there are many "wars of religions" in the cooking world, lucky enough less violent, between those opposed to pitting the cherries in the clafoutis (my case) and those in favor of it, between those who open their soft boil egg by the narrow part (me) and those adept of the wide end, between the partisans of Duke’s and those who only swear by Hellman’s (I am neutral as I dislike both of them!)…
As a matter of fact, I flavored my chicken pot-au-feu with hay: when I made my broth with the chicken carcass, I added a handful of flavorful hay wrapped in a cheese cloth, on top of the usual thyme, bay leaves, onion, cloves, carrots, celery… This brought to the broth a fabulous taste... like an afternoon in the August countryside… The rest is classical. I poached the chicken chunks in the broth, steamed the previously blanched vegetables (3-color new potatoes, carrots, kohlrabi, Brussels sprouts…) above the broth, and then served the chicken, the vegetables and the broth together, with a crispy chip made with the chicken skin (look at its beautiful translucent golden color) and a couple of deep-fried Brussels sprout leaves… The Chinon rouge (a cabernet franc from the Loire valley) and its herbaceous notes was a perfect match.
* During the Tour de France, combining two of my passions, biking and cooking, I will try to present (almost) every day a recipe from ) the route followed by the peloton.