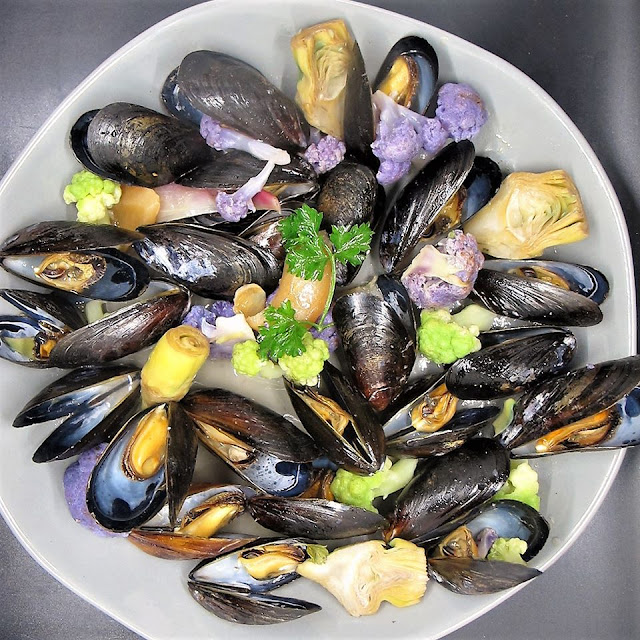 This dish featuring mussels, baby artichokes, green and purple cauliflowers was inspired by Brittany, where those three products are local fishing and growing specialties. But beyond the classicism of this recipe, its originality cannot be seen, just smelt and tasted. It includes a spice blend called Kari Gosse from the city of Lorient, in Southern Brittany. It is even called the Britton curry. If I told you that it supposedly (keep this word in mind) includes ginger, turmeric, clove, hot chili pepper, cinnamon, black pepper, coriander, cumin, cardamom and fenugreek, you may rightly observe that those spices would be more expected from tropical areas rather than from a region the latitude of which is northerner than New-York!!!
This is the first part of this interesting story, where the name of Lorient is a valuable clue. Why a city located in the Western part of France would be named Lorient, which literally means “the Orient” or “the East”? The reason is historical. In the 17th century, Lorient with its wide and well sheltered bay was chosen by Colbert, a Sun King's minister, to be the headquarters and the harbour of the French “Company of Indies” that was trading with India and in particular the French settlements (aka comptoirs) in Pondicherry, Chandannagar… Thereforefore, Lorient has had a long tradition of importation of Indian products and in particular those spices. QED!
The second part of the story is even funnier, since this Kari Gosse is exclusively sold in a few pharmacies only. I use on purpose the term “pharmacy”, and not “drugstore”. As a matter of fact, French pharmacies are not at all comparable to the American drugstores, which are literally “bazars” selling anything from food to cleaning products and from toys to beauty products… and, accessorily, in a remote area of the store, drugs and medications. French pharmacies sell quasi exclusively prescription drugs, which represents an average of around 85% of their turnover, the remaining 15% being OTC comfort products and other health- or hygiene-related products such as shampoo, toothpaste… The pharmacists are themselves professionals who have followed a 6-year specialized cursus and who are very knowledgeable about many health issues. Therefore, you mostly go into a French pharmacy when you have a doctor prescription or when you want to buy a painkiller, a box of adhesive bandage or cough tablets… and except if you consider the latter as food, you don’t walk into a pharmacy to buy food… Though, Kari Gosse is sold in pharmacies since it was created in the 19th century by a pharmacist from Lorient who kept his recipe secret. Since then, it is only sold in a few pharmacies and nobody knows its exact recipe. Kari Gosse though is frequently served with lobster bisque and this dish is now such a classic in Lorient that rumour has it that kids think lobsters were born naturally all spiced up! It is also commonly used with mussels and other seafood.
I didn't get Kari Gosse here in the USA, but a couple of months ago, as I wanted to make a lobster bisque like in Lorient, I was able to obtain some Kari Gosse-spiced lobster rillettes. I tried to replicate this blend. The result was not exactly the same, but not that far either... And after all, there are thousands of different recipes of curries or ras-el-hanout... This is blend that I used yesterday with those mussels. Beyond the story itself, the truth is that Kari Gosse, like curry by the way, is an excellent match with mussels...
mussels