CHICKEN COOKED IN A SALT CRUST

on May 09, 2020
Chicken in salt crust, stuffed with mushrooms and chestnuts, and its salmis sauce 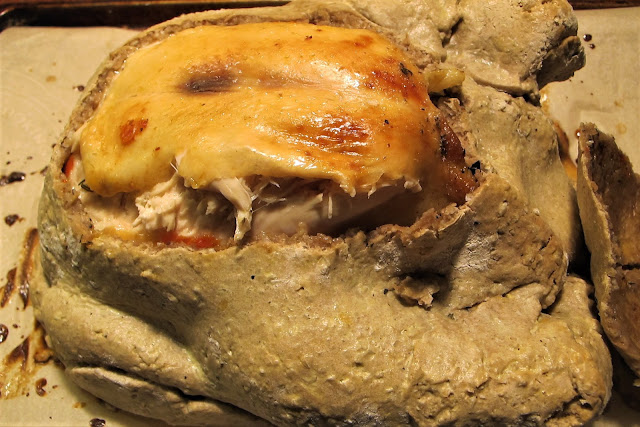 To make this dish, inspired by a recipe from the Béarn région in the Southwest of France:
I first sautéed in duck fat portobello mushrooms and roasted in a cast iron pan the (previously soaked and slotted) chestnuts. Then I seasoned (piment d’ Espelette, thyme… but obviously no salt!) the inside of the chicken (giblets kept apart) and stuffed the chicken with the chopped mushrooms and the peeled whole chestnuts. I brushed with olive oil enriched with mortared bell pepper, piment d’Espelette, thyme… and roast the chicken for 30 minutes in 350F preheated oven, and let it cool down 15/20 minutes afterwards.
Meanwhile:


I used the giblets (liver, heart, neck, wing tails…) to make a broth, sautéing them in duck fat with chopped duck bacon and onion, seasoning and flambéing them with Cognac, before covering them with water and let the broth gently simmer and reduce.
I prepared the dough for the crust, around 400g of coarse sea salt (from Guérande), 400g of flour, mixing AP flour and chestnut flour (in hindsight, unlike my recent pork tenderloin cooked in a chestnut bread crust, this didn’t bring any particular flavor), 2 eggs and 1 white, and a tiny bit of water (around 5cl, to adjust till obtaining the right elastic texture). I made two sheets, 1 smaller as the bottom and 1 bigger as the top… and keep some extra dough as patches in case if, and reserved the whole in the fridge.


When the chicken has sufficiently cooled down, I wrapped it with those two sheets, just sealing them together by pressing and pinching the dough. I brushed the top with a mixture made of the remaining yolk and a little bit of milk (it will reinforce the crust), put it in a 375F oven for around 45 minutes, and let it rest in its crust for around 20 minutes afterwards.


Just the time to sauté halved new potatoes in duck fat and to make a sauce from the broth: I strained it, got the liver and the bacon, blended them with the broth, strained it again, let it further reduce, before adjusting the seasoning and whisking butter into it just before serving. This is the principle of a “salmis” sauce when used with game birds.


The bird taken out of its "armor", was carved and served with its stuffing (mushrooms and chestnuts), the sautéed potatoes and the salmis sauce.
Nothing to add except repeating myself: those “confined” cooking techniques (salt crust, pastry crust, hay cooked in a sealed pot…) are really those optimizing the chicken’s flavors and moistness. 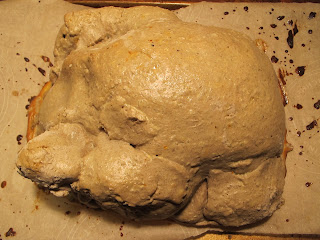 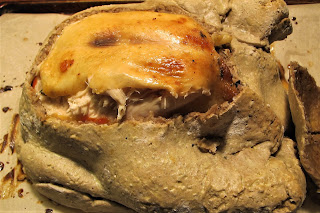 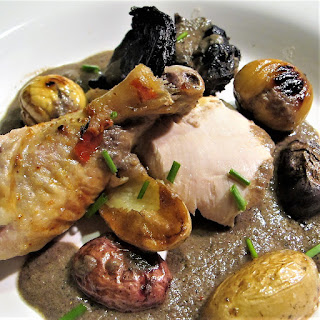 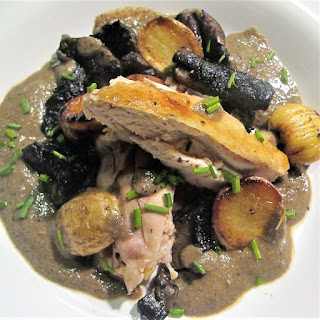