My quest for the (almost) perfect cannelé 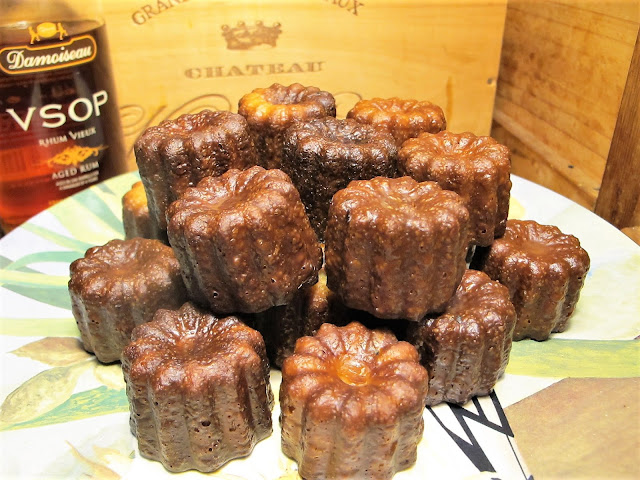 Ah! Les petits cannelés ... those lovely little delicacies!!! Born in Bordeaux, having spent a lot of holidays in the area, on the seaside and at my grandmother’s house near Libourne, those have nurtured, figuratively and literally, my gourmand imaginary universe… Le cannelé, I have always called it “petit cannelé” since my childhood, is a specialty from Bordeaux. To describe it rapidly, it is a bit like a melting-in-mouth vanilla/rum flavored custard inside, wrapped in a crispy caramelized envelop. This contrast of texture and those rich flavors are some of the reasons for its success, along with its particular shape of course.

Three years ago, as I was craving the cannelés of my childhood, I decided to make my own ones. I started with just silicone molds and an old non-performant electric oven... Reading many recipes and reports about the topic, investing in new bakeware (copper molds), new ingredients (beeswax) and new equipment (a gas oven), and testing new personal tricks, I progressively improve my technique. Here are the results of my quest for the best cannelé as possible. It is not over and there are still many aspects to improve, but I am really satisfied with the results obtained, visually and taste-wise, which would not mismatch in a pastry shop in Bordeaux...

Like often with iconic specialties, they are made of stories and legends, which are difficult to differentiate, and also include some marketing ingredients… Let’s deal with the marketing first, as it will solve a crucial problem: should we write cannelé with two “n’s” or canelé with one “n”? Originally and forever, it spells with two “n’s” for a very simple reason: “cannelé” means “splined” and is self-explanatory when you look at its shape. The story, or the legend, is that the first bakers who made cannelés used classical round molds. As they didn’t use yet beeswax to coat the molds and facilitate unmolding, they were said to hit the molds on their table edge, which ended up giving the cannelé its much recognizable splined shape. Subsidiarily, this shape increases its outside surface and contributes to enhance its crunchiness. Although you can find now, even in French, canelé written with one “n” only, this spelling was introduced recently, in the 1980’s, for pure marketing and branding reasons... For the same reason, marketing, there are now different sizes, but it was originally a small thing, 1 or 2 mouth bites only. To finish with the etymology and for the record, cannelé has nothing to do with cinnamon, “cannelle” in French, all the more so as there is absolutely no cinnamon in a cannelé.

Regarding the origin itself of this little cake, there are different versions. The first one would be that, something like in the 18th century, the nuns, from the Couvent des Annonciades located near the Garonne’s left bank, took the habit to collect the flour spilled during the unloading from the boats moored at the quays. They used it to make those little cakes, which they distributed to the poor people in their neighborhood. Another version, not contradictory from the first one, is that the local winemakers, in particular those from the Saint-Émilion area, used egg whites as finings for their wine, and either made cannelés with the yolks or were giving away (to the nuns?) the yolks…

The cannelé recipe calls for copper molds. I was able to take advantage of a really interesting promotional sales to get copper molds of a decent quality, but they remain expensive. The other possibility is to use silicone molds, much more affordable than the copper molds. In a nutshell, you can offer yourself 16 silicone molds for the price of 1 copper mold made by the French company Mauviel, the Rolls Royce of molds and pans! It is undoubtedly better with a copper mold, in particular in terms of color consistency and of crispiness, thanks to the much higher copper conductivity. I made my first cannelés with silicone molds, before switching to copper. I present below the method I have progressively developed for both materials after at least 25 positive but also negative tries during the last 2 years, obviously based on the mainstream methods, but with a few personal twists that I have no seen anywhere.

To enjoy… with a slightly oaky/butterscotch Chardonnay or with a shot of aged rum. 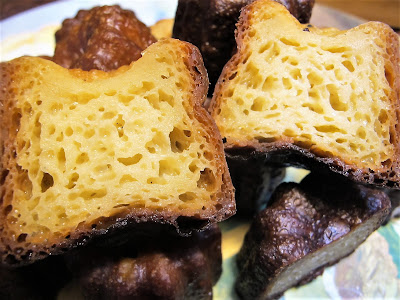 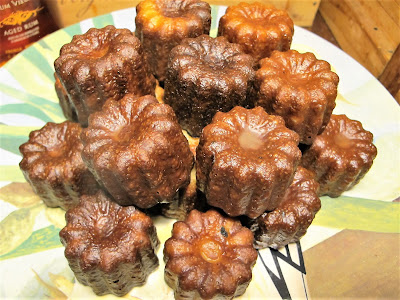 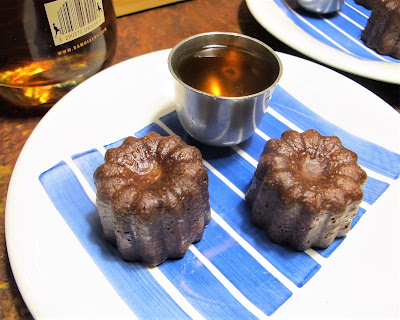