I WON'T CALL ANYMORE A BAD CAR A LEMON... 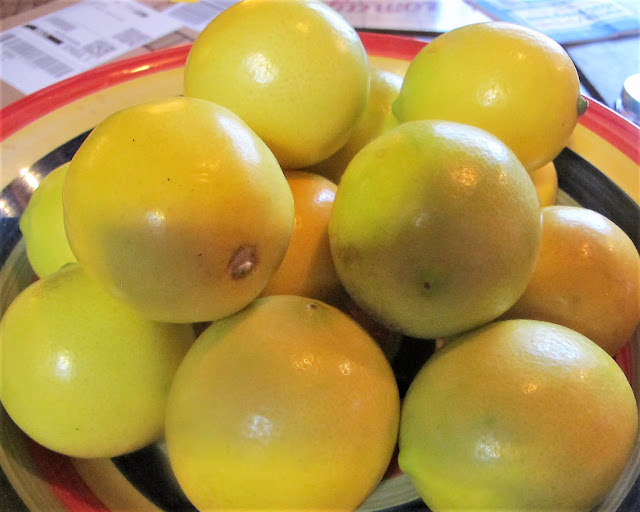 A few days ago, we had the surprise to receive a package from Texas. Full of superb and fragrant Meyer lemons. I never saw, smelled and even touched (their rind is so smooth) lemons like those. Coming directly from some relatives’ garden in Houston... What a treat... And what an opportunity to create different dishes around those spellbinding flavors, using this lemons both as a condiment and a full ingredient of those mostly improvised dishes. 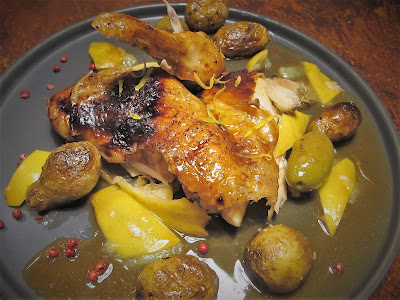 This chicken with lemon, aka poulet au citron, was inspired by a recipe from Menton, a beautiful city near Nice on the French Riviera. Menton is famous for its lemons, the best ones you can find in France, with a lot of similarities with the Meyer lemon (their odor, their relativeness sweetness as compared to other lemons...). Menton even holds every year on end of February its "Fête du Citron", a carnival dedicated to the "king lemon" with floats entirely decorated with, and focused on, lemons...
For this recipe, I stuffed the chicken with a whole non cut lemon, garlic cloves and fresh thyme and oregano sprigs, I brushed it with a mixture made of honey, olive oil, lemon juice and thyme (and regularly reiterated this operation), put it on a roasting dish and roasted it for 2 hours at 350 F, flipping it over a couple of times in-between.
It was served with roasted young potatoes, olives, segments of the "stuffing" lemon, and a sauce made from the chicken cooking juice and lemon juice... 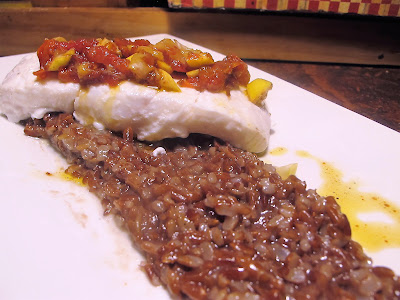 This technique was inspired by a French chef from the area of Saint-Brieuc in Brittany, the French coquilles saint-Jacques (scallops) cradle, consisting in steaming scallops on a layer of coarse salt with lemons and/or citruses (see here), herbs, spices, the whole dry-marinating and infusing for a minimum few hours, then steaming the scallops, protected by a parchment paper sheet on this salt and citrus layer just humected with a little bit of water or, better, one lemon juice.
Here, I adapted this technique to cook a halibut filet, infusing segments of Meyer lemon and key lime, with lemon grass, fresh thyme and Timur pepper with the salt (see picture in gallery below), before steaming the halibut filet, over medium low burner (3) for around 30 minutes or till the halibut is perfectly cooked.
I served it with red rice from Camargue, cooked “à la Créole” (i.e. like pasta) and with a virgin sauce variation made of olive oil, chopped preserved Meyer lemon, chopped sundried tomato, black garlic, herbs, and gently warmed up… 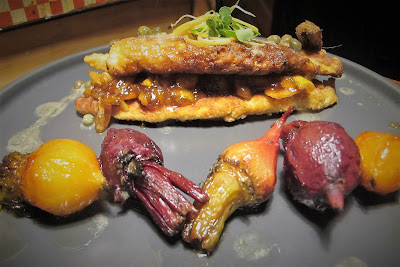 For this dish, I had first the idea to fry the breaded flounder filet and, since it was “breaded” to use it as a toast on which I would spread a lemon jam… With a coffee, it would have made a fantastic dessert. If I eventually changed a little my plans, the idea was there…
I decided to make a sandwich instead of a simple toast, to mitigate the lemon acidity- successively and twice in flour, egg and a ground almond-bread-Timur pepper breading, and fried them in olive oil.
I coated the flounder filets -2 filets per serving, I had previously made a Meyer lemon chutney, with finely chopped lemon, honey, a licorice stick and oyster sauce. The flounder/chutney sandwich was served with various baby beets: the red beets poached in water with a star anise seed and the gold and pink poached in olive oil with half a licorice stick. Aa not everybody likes beets, another version was served with blanched Brussels sprouts and baby potatoes. 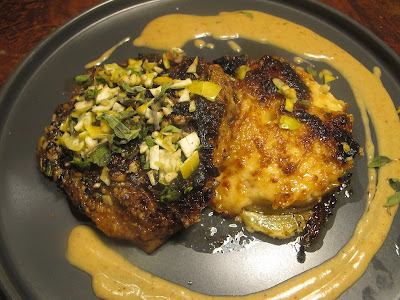 One of the French chef I admire the most is the 3-Michelin star Alain Passard of L’Arpège in Paris. Up to the late 90’s, Passard was famous for his amazing rôtisseur skills, i.e. his capacity to roast and serve sublime meat and poultry specialty. For some existential reason -nothing to do with a conversion to veganism, just the depressing feeling of having exhausted the whole topic- Passard made a 180-degree turn and focused mostly on vegetables. He has since then bought three vegetable gardens within a 2-hour drive from Paris, developed a vegetable-centered cuisine and… kept his three Michelin stars! In particular, he had a very personal way to associate vegetables, based on the seasons, of course, but also their shapes, colors, smells. For instance, he associates the rutabaga and the lemon, inspired by this root’s inside color and shape (unlike me here, he has small oval-shaped rutabagas), in a Dauphinois-type gratin of rutabaga.
The gratin was made exactly like a gratin Dauphinois, cooked with milk and cream only (no cheese), with grated lemon spread on the top. I sided it with a breaded veal chop… or vice-versa!
I boned the veal chop and kept only the round central part, keeping the trims as a stuffing for the rutabaga raviolis described below and the bones to make a sauce. I breaded the chops à l'anglaise, i.e. a 3-steps coating in flour, egg and, here, ground pine nuts. The veal chop was gently fried in foamy butter on both sides and topped with finely chopped Meyer lemon rind and oregano.
The veal chop and the rutabaga gratin were served with a sauce made with the veal bones, Cointreau liquor, Meyer lemon juice and mixed with part of the thickened gratin cooking milk. 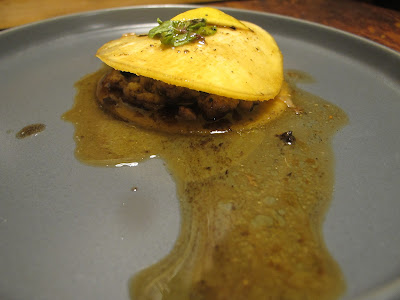 This dish was a starter, derived from the veal chop dish above. The thinly “mandolined” and round shaped rutabaga slices were cooked in the veal bone sauce, before being stuffed with a filling made of the gently seared and roughly chopped veal trims, chopped oyster mushrooms and preserved lemon, with the veal meat juice.