BIFTECK FRITES... THE "RECIPE" OF THE PHILOSOPHER ROLAND BARTHES

on December 05, 2019
Bifteck frites as seen a bit differently 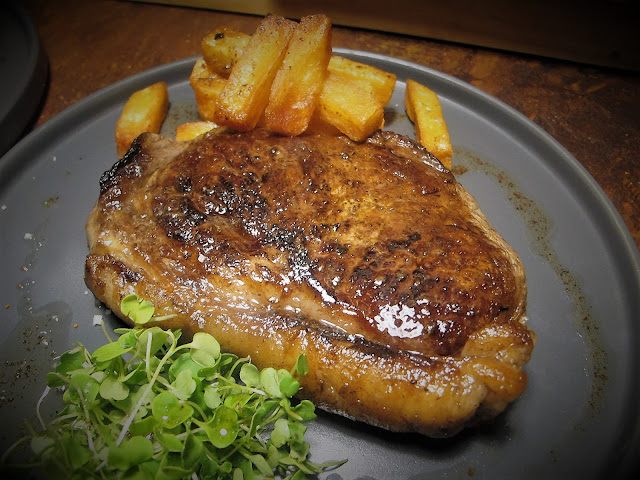 (bifteck = contraction of beef steak in French, bifteck frites or steak frites being probably the most iconic French dish, before boeuf bourguignon or veal blanquette)
This "bifteck frites" is the opportunity for me to share, not a recipe (c'mon, a piece of meat and fries!), but a beautiful text (faithfully translated) written more than 60 years ago by the French philosophe Roland Barthes in his book "Mythologies" where he analysed the symbolics behind objects or situations, what he called signified and signifier, or "myths". I discover this book, featuring more than 50 myths, 40 years ago and read it regularly since then. The "bifteck frites" is one of those myths, and maybe, if you are brave enough to read this text longer and different from/than usual, you will see your steak with a different eye.
“Steak participates in the same sanguinary mythology as wine. Steak or bifteck is the heart of a cut of meat, mythologically it is meat in the pure state, and whoever eats it assimilates a taurine strength. Apparently steak’s prestige relates to its semi-rawness: blood is visible in it, natural, dense, compact yet sectile; ancient ambrosia can easily be imagined as this kind of heavy matter which diminishes under one’s teeth so as to make one aware of its original strength and t the same time of its plasticity in pouring into mans’s very blood. Full-bloodedness is steak’s raison d'être: the degrees to which it is cooked are expressed not in calorie units but in images of blood, rare steak is saignant when it is said to suggest the arterial blood of the animal whose throat has been cut, or bleu, which is the plethoric blood of the veins suggested by the purplish color, a superior degree of redness. Even a moderate degree of cooking cannot be explicitly expressed; such an unnatural state requires a euphemism: a medium-cooked steak is said to be a point, an expression intended more as a limit than as a degree of perfection.
To eat steak saignant therefore represents both a nature and a morality: a "nature” because it is supposed to benefit all temperaments, the sanguinary because it is identical, the nervous and lymphatic because it is complementary. And just as wine becomes for many intellectuals a mediumistic substance that leads them in the direction of the original force of nature, in the same way steak for them is a redemptive element thanks to which they make sort of a prose of their cerebrality and exoricise, by means of blood and soft pulp, the sterile dryness of which they are incessantly accused. The vogue of steak tartare, for example, is an operation by which a spell is cast against the romantic association of sensibility with sickliness; in this preparation are to be found all the germinative states of matter; the bloody pulp of beef and egg whites, a regular harmony of soft and living substances, a sort of signifying compendium of images of parturition.
Like wine, steak is, in France, a basic element, nationalized even more than socialized; it figures in every setting of alimentary life: flat, yellow-edged, somewhat shoe-leathery in cheap restaurants; thick, juicy, in specialized bistros: cubical, the core moistened throughout beneath a charred papery crust in haute cuisine establishments; it participates in all rhythms, comfortable bourgeois meals and bohemian bachelor snacks; it is a foodstuff both dense and expeditious, creates the best possible rapport between economy and efficacity, as well as both the mythology and the plasticity of its consumption.
Moreover, it is a French possession (circumscribed nowadays, it is true, by the invasion of American steaks). As with wine, there is no alimentary constraint which doesn’t make a Frenchman dream of steak. No sooner abroad than his nostalgia for it is declared, here steak is endowed with a supplementary virtue of elegance, for in the apparent complication of exotic cuisines, it is a nourishment which is thought to combine succulence with simplicity. National, it follows the index of patriotic values: it rises with them in wartime, becoming the very lifeblood of the French combatant, the inalienable possession which can fall into enemy hands only by treason. In an old movie, Deuxieme Bureau contre Kommandantur, the patriotic curé’s housekeeper serves a meal to a German spy disguised as a French underground fighter: “Oh, it’s you, Laurent: let me give you some steak!” And then, when the spy is unmasked: “And to think I gave him some of my steak!” Supreme abuse of confidence.
Usually associated with fries, steak transmits to them its national luster: fries are as nostalgic and patriotic as steak. Match has taught us that after the Indochinese armistice “For his first meal General de Castries ordered French fried potatoes.” And the president of the Ind-Chinese Veterans, commenting subsequently on this information: “General de Castries’s gesture of ordering French fries for his first meal has not always been properly understood.” What we were being asked to understand was that the Genera’s order was certainly not a vulgar materialistic reflex, but a ritual episode of approval of French ethnicity recovered. The general was well aware of our national symbolism, he knew that fries were the alimentary sign of Frenchness.“
Roland Barthes, from Mythologies