Leek and clam Cannelloni, Clams and leek/potato stoemp in their shells 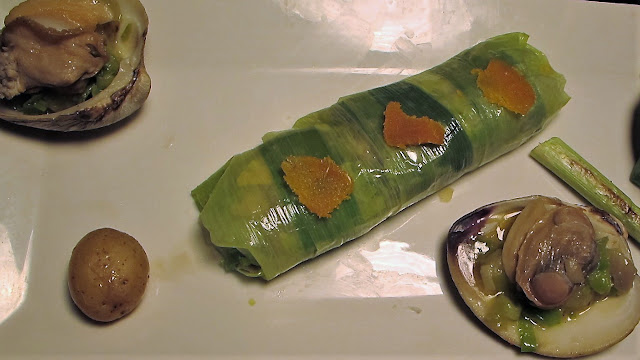 Leek is a vegetable that had long been a bit overlooked… Belonging to the same family as onion, garlic, chive… it was not really considered as a fully entitled or a primary vegetable…  Just the complement of potatoes and carrots in a soup, a beef stew… The only exceptions that come to my mind right now is, first, what is called the poireau vinaigrette, where the leek is very boringly boiled in hot water and served with a vinaigrette, the mission of which is to wake up this immense blandness, and second, more recent and more exciting, the fondue de poireaux, where the chopped leeks are simmered in a very generous quantity of butter so that they melt in mouth… Generations of leeks should pay a tribute to unknown cook who invented the fondue de poireaux as he brought credibility and recognition to the leek. Fondue de poireaux has now become a common, and delicious, side for some prestigious seafood, such as scallops, cod…

The recipe I partly improvised today was based on the fondue de poireau, although I borrowed some aspects from the poireau vinaigrette (very much revisited by the French chef Philippe Etchebest) and from the Belgian leek/potato stoemp. I served it with a seafood, but not with scallops for a change, but with cherrystone clams.

Here it is:
§  Cannelloni of leek and clams, topped by chips of bottarga
§  Clams, with leek and potato stoemp, in their shell
§  Grilled leek segment
Gallery 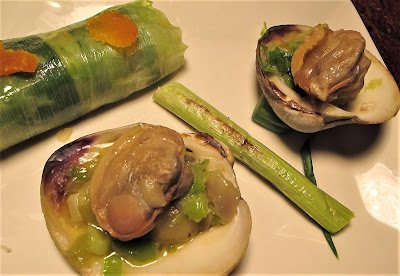 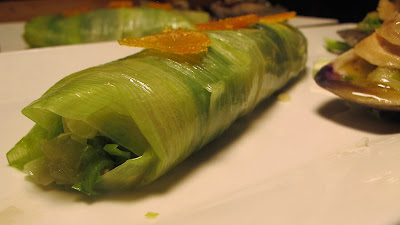