on August 27, 2019
Eggplant cooked (almost) like a Boeuf Bourguignon 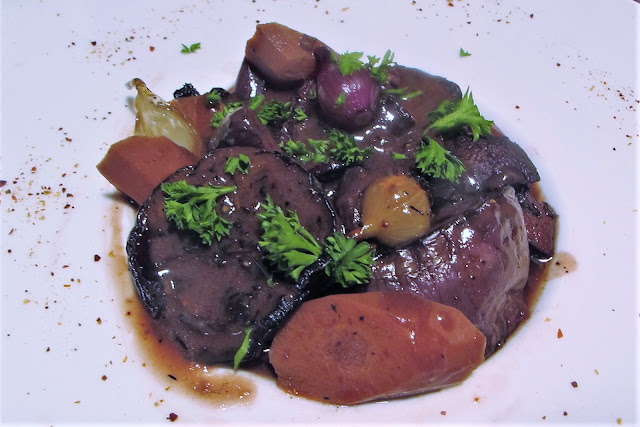 Total freestyle recipe imagined during an... insomnia!
Well, in fact, I didn't imagine anything since I followed, although adapted it a bit, the boeuf Bourguignon recipe... except that I replaced the beef with eggplant!


My concern in this recipe is that the eggplant is a vegetable blotter: it absorbs the liquid in which you cook it... For this reason:

Then, the eggplant was stewed for around 1 hour, almost fully covered by wine (Pinoit noir), exactly the same way used for cooking fondant potatoes for instance. And I added the same classical attributes found in the BB, bacon (sorry "meatless Monday", not a 100% vegan dish) (I used duck bacon, but next time I will use slab bacon cut in dices for a better texture), carrot segments, mushrooms (baby bellas or the likes) and glazed pearl onions...
I use the cooking wine to make a sauce, reducing it and also, as there is no collagen in eggplant), thickening it with flour...
bourguignon eggplant