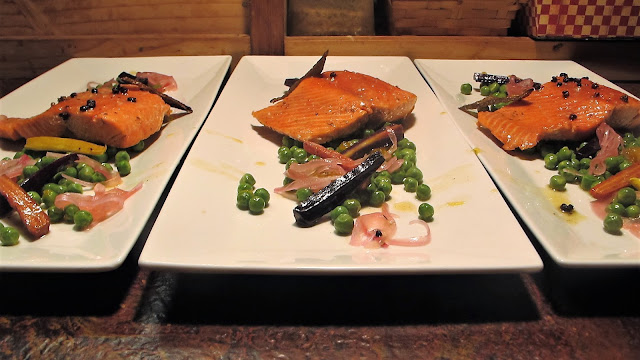 In a previous post, I told the story of this fabulous poached salmon that I experienced long time ago. Today is another story of a poached salmon. But this one was not illegally fished at all, I simply and classically bought it at my favorite grocery store and poach it in olive oil at low temperature.

The rightly named Oily Fish
Poaching (for the rest of this post, it will mean immerse the food in a liquid to cook it gently) is naturally not a rare technique. It is even very pedestrian when one talks about eggs (in boiling water), pears (in red wine), or, here we are, fish (in a broth)… In the latter case, it allows to cook particularly fragile and delicate fish (sole, turbot, cod…) without aggressing it with a traumatizing contact with a hot metallic surface. But there are other species of fish that particularly benefit from the poaching technique, in oil this time. And funny enough, this is as if they had been premonitorily named after their natural inclination for oil bathing: I obviously mean the oily fishes. Tuna, mackerel, salmon, sardines, herrings, anchovies, wahoos, bonitos… Once again, it is interesting to note that the oily fishes are generally those that you can buy in cans, as if there was an harmony, an osmosis between the fat inside and outside the fish… As a matter of fact, those fishes as a whole and salmon in particular love oil and being cooked, poached, preserved… in oil.

A highway of flavors
But poaching in oil also offers another considerable advantage. As everybody knows it, fats in general, and oil in particular, are fantastic to capture and to convey tastes and flavors. No wonder why everything is better with bacon! So, when you posh an oily fish in an oil bath flavored with herbs, spices, essences… the surrounding oil captures those flavors, pass them to the fish… rich in internal oil that will in turn capture them… et voilà! This characteristic is a windfall for the cook and opens the door to many culinary possibilities. To be noted that poaching in oil is a particularly efficient way to cook some vegetables and infuse them with extra flavors, fennels with citruses or beets with star anise, among an infinite number of other options.

In this particular case, the salmon steaks were poached at 150F in oil infused with orange and lemon rinds, Timut pepper, bay leaves… They were served with green peas blanched, cooked in a small quantity of French limonade and mixed with a quickly made orange marmalade, with multicolor carrots cooked in butter, and with quickly pickled red onions… 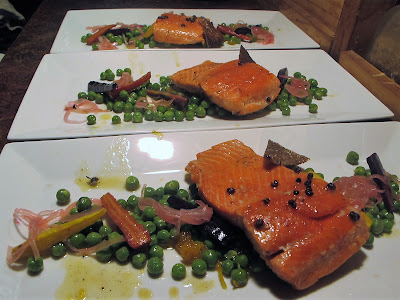 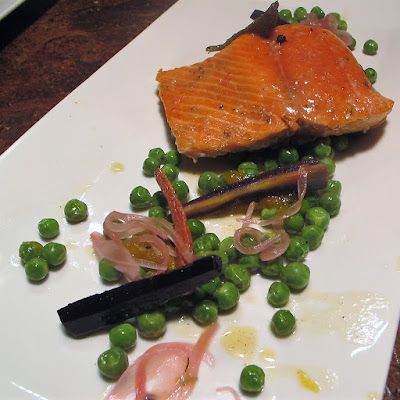