PAELLA STORY AND OTHER METAPHYSICAL CONCERNS… 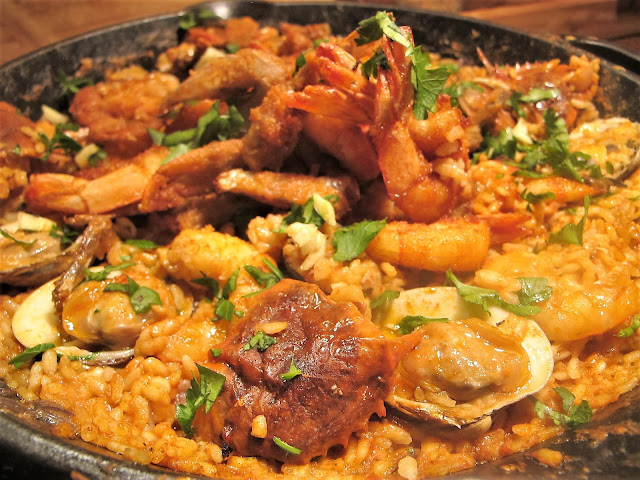 To be or not to be?
Cooking certain dishes could sometimes be problematic. Oh! I don’t refer here to pure technical culinary difficulties, I leave this to the cookbooks,  but to intellectual, if not metaphysical interrogations… What is the weight of traditions, should you  follow a recipe to the letter or just keep its spirit, is the original recipe set in the stone of your countertop, how far are you “authorized” to vary a culinary good practice built up through multiple generations? You see, not simple!!!

For instance, should the famous quiche Lorraine, the culinary flagship of the region, incorporate cheese or onions or any other ingredients which are absolutely not in the traditional recipe(as a reminder, crème fraiche, bacon, a touch of nutmeg and possibly a hint of Dijon)? Being from Lorraine, the answer for me is obviously “NON”, not at all. Now, if you want to put cheese in your quiche, it is absolutely not a problem. Just don’t call it quiche Lorraine. You see, I am open-minded!!!

Another example is the cassoulet… Yes, but here, it is even more complicated because you need, first, to answer to the question : “Which cassoulet?” Carcassonne, Toulouse, Castelnaudary… Should it be made with duck, pork, lamb, game? And with which beans: lingot de Castelnaudary, coco de Pamiers or haricot Tarbais? The Hundred Years’ War is nothing compared to the Cassoulets’ War… As I care for my safety, I will cautiously avoid answering those questions…

The Paella? A political marketing invention
And the paella? The case is very interesting indeed. First of all, this is quite an old dish, although not that old (18th century) originated from the area of Valencia in Spain. Traditionally and originally, it is defined as a rice dish, cooked in a pan named paella (similar to the French poêle, the Valencian dialect, like its northern neighbor the Catalan, sharing many words with the French Occitan language). But surprisingly enough, and although Valencia is located on the Mediterranean coast, the Valencian paella incorporated only poultry meats: chicken, duck, rabbit… and possibly snails! No shrimps, mussels, fish or other seafood, no chorizo, considered as an heresy, either… What is amazing is that the paella’s success, beyond and despite its obvious gustatory qualities, is mainly the result of political marketing campaign. After the Spanish civil war, Franco wanted to develop the Spanish tourism industry and probably, also, reunify Spain. In this respect, he picked up the paella as the iconic food specialty of Spain: a cheap dish, the color of which, red (tomato, red pepper) and yellow (saffron) reproduce those of the Spanish flag… From a rather obscure local specialty, the paella has become a national symbol and an international success, losing by the same token its exclusive poultry dish to become a seafood dish, and even incorporating -sacrilege!- chorizo…

The lesson: just a question of crust
Thus, like the cassoulet is eventually a way to cook beans with different and varied types of meats, the paella is a way to cook rice with varied types of meats and seafoods… In both cases, this is just a question of “crust”: the soccarat at the bottom for the paella and the “croute” on the top for the cassoulet.

Out of the box: soft shell crab, crispy shrimps, clams, steamers
Here I made on the charcoal BBQ a very “free” paella with Bomba rice, incorporating: 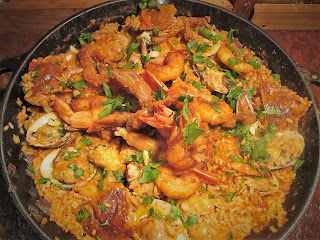 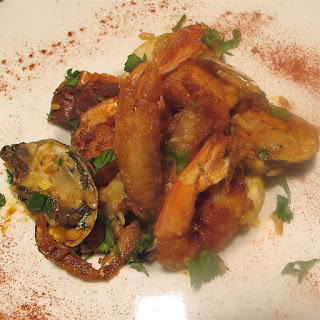 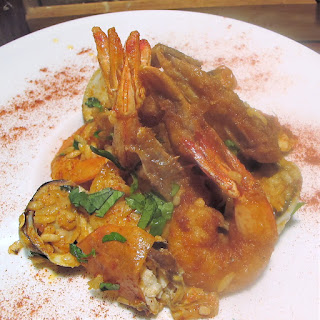 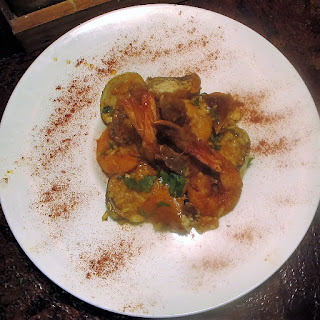