UNUSUAL TECHNIQUES: TROUT STEAMED ON A BED OF CITRUS RINDS


Golden trout steamed on a bed of “burned” citrus rinds, served with leeks cooked in citrus butter, a sherry and citrus “soup”, some raw citrus segments, and Timut peppercorns 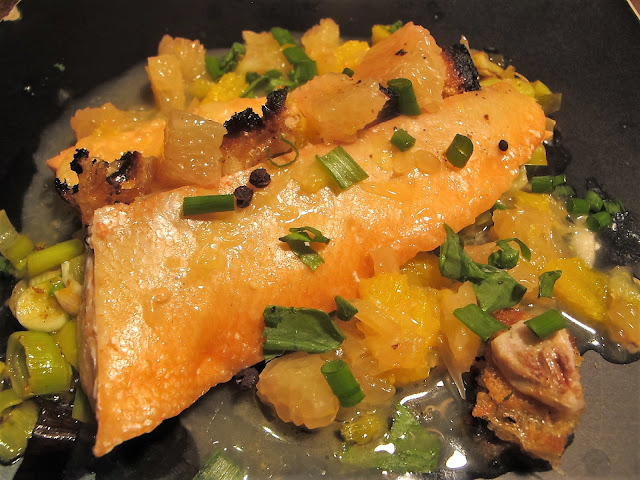 Trout is a fish that I used to like a lot when I was a kid. First of all, because I was fishing it. All “kids” from 3 to 103 adore to eat the product of their fishing feats. It is obviously much better than the anonymous fish bought gutted, scaled and fileted at the fishmonger’s… I generally spent the end of my summer vacations at my grandparents’ house in the Vosges area, a small mountain in the East of France. I keep from those periods many delicious memories of times spent with my grandfather, foraging for mushrooms (chanterelles, porcini…) and wild blueberries in surrounding forests, and savoring them under the form of fricassees or pies beautifully cooked by my grandmother. This has surely contributed to, and fed, my passion for cooking. Fishing the trout was part of those alimentary activities although I should confess that the "feat factor" was very relative as this was taking place in a trout farm built along one of the many brooks running down from the Vosges mountains. Afterwards, my grandmother used to cook the fish either “au bleu”, where the fish just caught out of the water was rapidly poached in a court-bouillon, taking a beautiful night blue color, or “aux amandes”, i.e. seared in a simmering butter and served with grilled almonds. Getting older, I had become less keen about the trout, mainly because for a certain period of time in France, the farming had turned into more intensive and industrial businesses, using and abusing questionable food that gave a starchy taste to the fish. That said, I have recently bought some (farmed) trout at my favorite grocery store, which has proven of a very good quality, and I have started to cook it again… but not yet “au bleu”, alas!

This is why, when I saw this beautiful golden trout of a respectable size (4 lbs.), I didn’t hesitate one second even though I didn’t know then how I would cook it: whole in the oven, fileted and seared with grilled almonds, cooked on pine needles with pine nuts… Eventually, inspired by the French chef Éric Guérin, as well as by the matching colors of a pink grapefruit and the golden trout, I decided to cook  it with citruses and leeks. I deviated a tiny bit from Guérin’s recipe, substituting leeks to broccolini, but also and mainly, instead of cooking it classically in a steam cooker, I steamed the trout filets on the grapefruit, orange and lemon rinds. I first literally burn them in a pan without any fat ingredient, then add some Sherry to add to the grapefruit bitterness and a glass of water, thus creating an aromatic steam. I placed the filets on the rinds, skin side down, and cover with a lid, out of the burner, for around 10 minutes  or till the white albumin appeared on the fish surface. Honestly, this is a fabulous way of cooking: it doesn’t aggress the fish at all and flavors it nicely.

For another unusual way (on a slice of bread) to cook trout or freshwater fish, go on https://www.cookingismuchmorethanrecipes.com/2019/03/unusual-techniques-fish-steamed-on.html 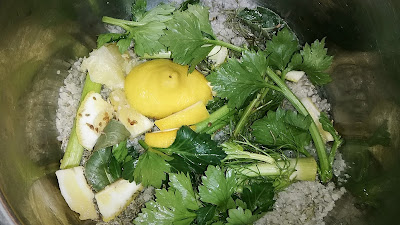 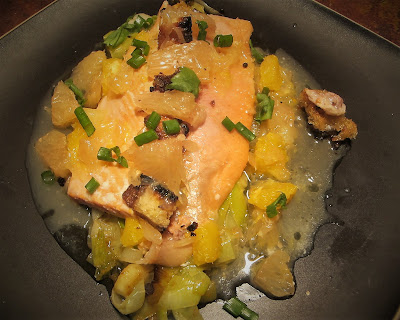