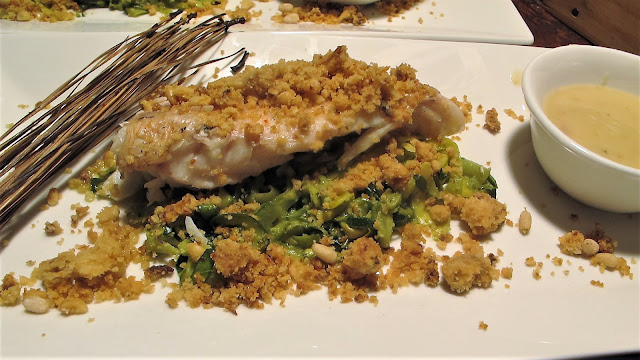 Was I injected with a pine needle?
My friends know that I am a pine nuts or, put it otherwise, that I always pine for the pine scent, for everything edible with pine nuts into it, pesto, pignoli cookies, and even for cooking with pine needles…
In  fact, I guess this addiction dates back from my summer vacations spent from my very young age on the seaside, by the Bassin d'Arcachon or in the Island of Oléron, in the North of Bordeaux. Oléron is a luminous island (hence its "other" name, l’île lumineuse) featuring a landscape of beaches, of old marshes and of stone pine forests. If I used to spend a lot of time on, or rather by, the beaches, navigating on any floating object carrying a sail, from the small funboard to the wide cruising multihull, if I also rode my road bike or my mountain bike on all the paths running along the marshes, now transformed in oyster parks where the very famous Marennes-Oléron fines de claire (oysters refined in cleared water park) are grown, I also enjoyed a lot exploring the stone pine forests... I woke up early in the morning to run with a group of marathoners or long distance runners, to keep up with my cross-country training… Beyond the efficiency of this method (there is no better exercise than running in the sand) that allowed me to qualify for the French junior championship, I keep a strong olfactive memory of the pine scents exhaling when the sun started to heat up the pine foliage. And when I didn't run, I loved foraging in those forests to pick up the pine cones and shake them to drop the pine nuts, before gently breaking their hard shells between two stones and savoring those tiny and delicate kernels nested inside.

Cooking with pine needles
On top of its oysters, Oléron is also renowned for its mussels, named bouchots, after the name of the stakes on which the mussels are farmed. The locals have developed a unique technique to cook those, which is in my opinion the best existing way to prepare mussels… This method, named églade (or éclade), consists in cooking the mussels under a layer of enflamed pine needles so that they just open while taking the pine sap taste. Inspired by this method, I have developed techniques where I cook a chicken in a pot filled with pine needles or a fish in the oven on a bed of pine needles and sealed.

Please note that you cannot do it with any type of pine needles. First of all, some of them such as the cedar needles are said to be toxic and they are not adapted to this cooking technique. It is necessary to use stone (also named umbrella or parasol) or maritime pine needles, growing by the sea in a sunny climate, ensuring that the needles are dry and flavorful. In the US, the pine needles I use are coming directly from Texas.

Papillote of pine needles
Today, I adopted a more elaborate technique, cooking and infusing this beautiful red snapper in a papillote of pine needles… This is in fact a traditional aluminum papillote, where instead of throwing fresh thyme stems and other herbs, I put a generous quantity of pine needles, inside the fish and outside. This not only loads the fish with nice flavors and aromas -Ah! Those scents when you unwrap the fish!!!-, but it also has two advantages:
. first, the pine needles stuck inside maintains the fish standing up on its belly, meaning that each side will cook consistently
. second, the pine needles make a protection and avoids the fish skin to stick on the aluminium. 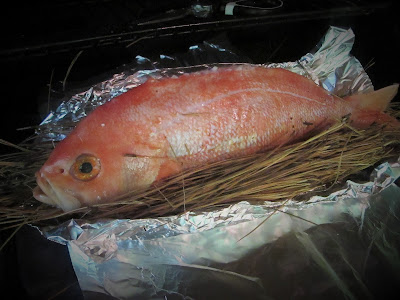 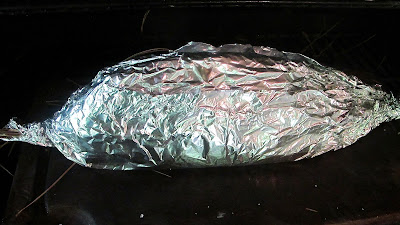 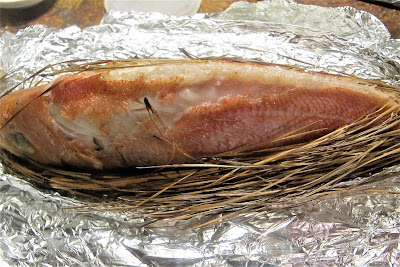