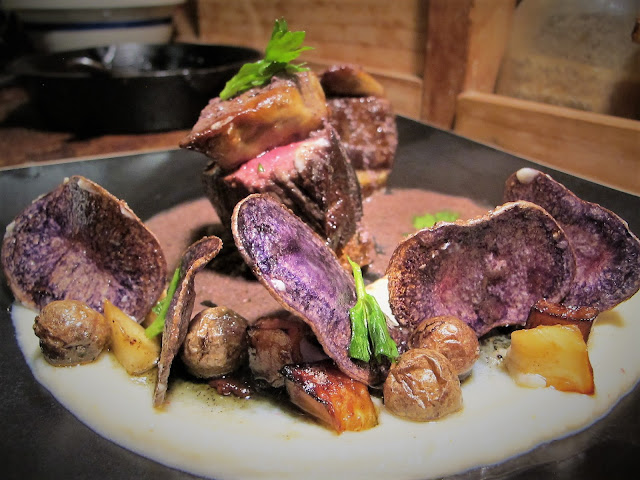 The tournedos normally refers to a slice of beef filet, possibly wrapped in a slice of bacon or pork fat ("barde"). The origin of the word is less "positive": it literally means "turn the back". When used in a culinary context, it originally referred to piece of fish or meat that were not presentable in the fishmonger or the butcher's stands, because of their cut or their age. Therefore, the product was turned back so that only the nice side was shown. But since in certain cases, ageing and maturing, in particular in case of beef or venison meat, is a recommended process, the word progressively lost its pejorative image to refer to something positive. Now, it normally refers to a 1.5-2 cm thick* piece of beef filet, possibly wrapped in a slice of bacon or pork fat ("barde"). Above 2 cm,  i.e. from 2 to 4 cm thick, it is called a Chateaubriand. By extension, and with the current culinary trend consisting in renaming by analogy many cuts or preparations, it also refers to a round shaped piece of tender meat or fish.
There is another version that relates directly to the Rossini tournedos, named after the composer  Rossini. Rossini was then a celebrity and as such, like all celebrities then and now, he used to indulge in caprices. Otherwise, you would not  be a celebrity, correct. One day, one of Rossini’s caprices was to order a piece of beef, but he required to put foie gras and truffle on top of his meat. A bit showing off, Rossini, wasn’t he? As the restaurant owner didn’t want his other clients to see this custom-made order –the story doesn’t say if he was ashamed of it, if he didn’t want the other guests to order the same or if he was playing on the surprise effect- the waiter was asked not to show the dish and to present it hidden while turning his back... Nice story, but the term “tournedos” was apparently used before Rossini was born... But the tournedos Rossini remained.
In any case, and whatever the real story is, needless to say that today's tournedos are presentable from each single side.
Tournedos Rossini is classically a beef fillet tournedos, placed on a toast and topped with a foie grass ice and truffle chips… My version of the tournedos is a “cheap” one: I used bistro fillet instead of beef fillet; since bistro fillet is narrower than beef fillet, I was able to use foie gras trims, much cheaper than foie gras slices; and for the truffle… some purple potato chips and truffle oil to cook the celeriac served as a side… 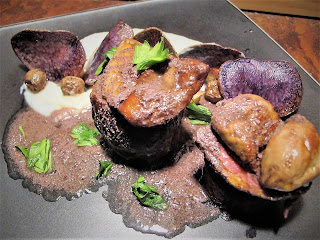 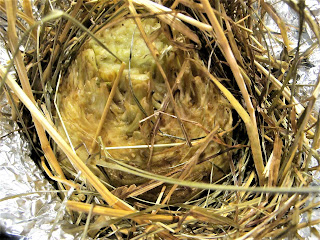 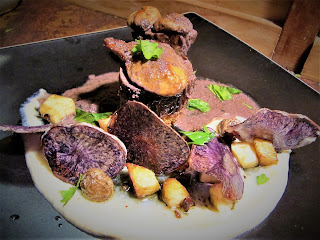