WHAT DO JERICHO AND AN OCTOPUS HAVE IN COMMON?

Pulpo a la Gallega: Octopus cooked in the Galician way, with some personal twists 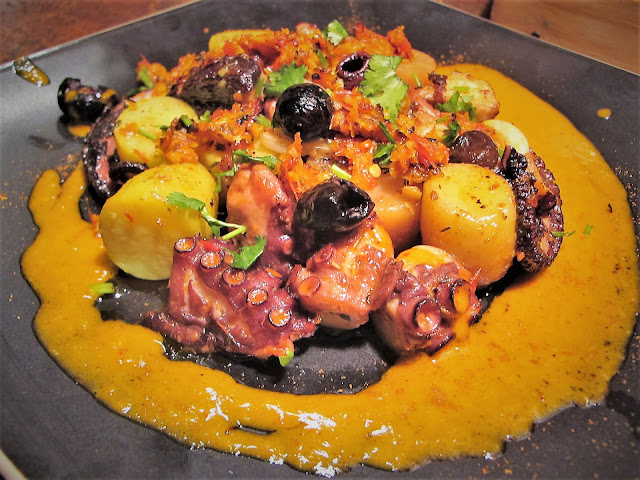 I will always remember my first experience of pulpo a la gallega in Cabo Finisterre, Galicia, "some" decades ago. We were a dozen of friends, cruising together on three sailing boats from France to Galicia. As I have experienced it at many occasions, sailing is a great way to meet with unexpected people and to live "authentic" experiences. Our first stop after 2 or 3 full days and nights of sailing was the small fishing harbor of Cabo Finisterre at the extreme North-Western end of Spain. As soon as we arrived there and just took our mooring, our welcome committee stepped on board. This committee had only one member, a fisherman known as the loco del pueblo (the "village's fool") and the nicest guy on earth. As a welcome gift, he offered us an octopus that he had just fished. Of course, as we didn't know how to prepare it, and as this guy, again, was such a nice person, he prepared it for us. He took a big boiling water pot and plunge the octopus into it. Once doing it, he explained to us that you have to plunge it seven times in the boiling water, because this was the number of times the Joshua's Israelite army marched around the city of Jericho blowing their trumpets before the walls collapsed... So seven times, in the boiling water and, the truth obliged me to say so, in case the trumpets would be unefficient, he also hammered the octopus to tenderize it before cooking it in the Galician way (with steamed potatoes, olive oil and paprika).

To enjoy with a glass of Albariño, the local white wine, or, since we are talking about authenticity, not served in a glass, but in a small bowl as it is the way Albariño is served in the "bodegas" in Galicia. As far as we were concerned, we didn't have Albariño yet, but we had some bottles of Muscadet with us and we shared with our new friend. I guess, we also gave him 1 or 2 bottles to bring back home. This was my first "pulpo a la gallega" and the best I have ever had, although I had it frequently during my numerous trips in Madrid or Barcelona. I also cook it regularly, trying to follow the principles (7 times) of our friend there...

Here is a recipe of this pulpo a la gallega, with a few personal variations, inspirational or simply imposed by the lack of some ingredients. 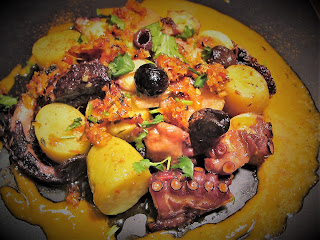 For the dish itself: 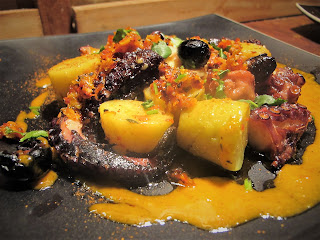