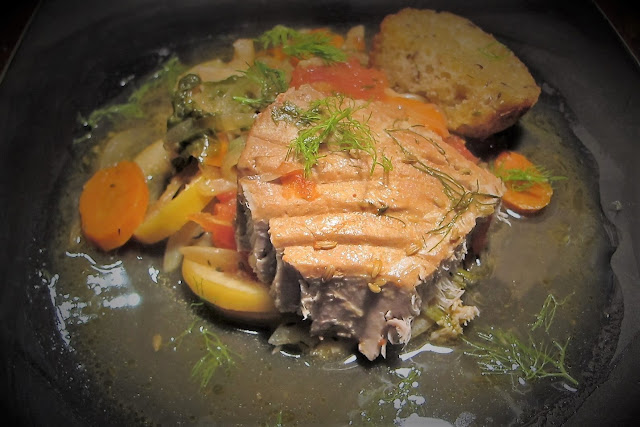 Like cinema, and much more than cinema, this very young art, literature has very frequently included and borrowed scenes, references, and recipes from the culinary word. Without mentioning the ancient Greek or Latin text, authors like the French François Rabelais, in the 16th century, whose heroes, Gargantua and Pantagruel, even left their name to qualify an abundance of food, and by extension an abundance of everything, or more recently, the Catalan Manuel Montalbán whose novels feature a gastronome-detective, and of course, the American writer and essayist Jim Harrison who is probably more familiar to those reading this blog. When I organized a festival in 2004 focused on the gourmet media, I wanted one of those -not Rabelais, of course!- to be the president of my jury. Alas, Montalbán died just before and Jim Harrison's health was declining...

Fox in the stew

Today, I want to talk about Jean Giono, one of the French major novelists of the 20th century. I am not sure whether he is really known in the US,  but you might have heard about one of his masterpieces, the horseman on the roof, as an eponymous movie with Olivier Martinez (Unfaithful) and Juliette Binoche (The English Patient) was based on this beautiful novel. The action takes place around 1830 in Provence, or exactly Haute-Provence, the hinterland in the North of Marseille, in the beautiful and picturesque little city of Manosque, during a cholera epidemy… Which doesn’t prevent Giono to give us his recipe of polenta with white wine: The polenta au vin blanc, very sweet and as liquid as a soup, was appetizing to swallow. Afterwards, it lays on the stomach like red lead… [my old hussars] eat polenta with white wine when they’re in a tight spot. In another novel, he described a recipe of a daube (stew): From 1st of January  to New Year's Eve, a huge cauldron was on an open fire…; Without ever unhanging or emptying it, we poured, day after day, beef, hare, wild boar, wild rabbits, red wine, virgin oil, bacon, thyme bouquets, laurel, nutmeg. And Giono comments: “and sometimes, we added fox, but moderately and only for the fumet." Well, this foodie had also a certain sense of humor… If you have the possibility, read the houseman on the roof, and if you are to visit the South of France, Manosque is a must go… even if only to savor some cherries on a bench on the city’s central square on a late spring early afternoon (personal memories). 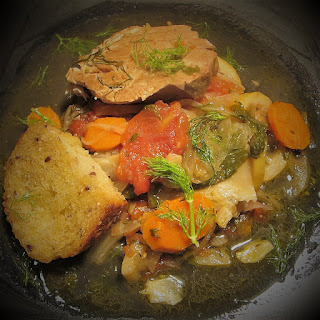 Jean Giono was not a cook himself, but he was undoubtedly a gourmand and a gourmet, probably more gourmand than gourmet, as the list of his favorite dishes compiled in a book by his youngest daughter may suggest it. Among those favorites, there is the thon en chartreuse (tuna fish in chartreuse). Why chartreuse? Because this was a dish initially cooked by the chartreux monks, the same who gave their name to a mountain liquor. And why tuna fish? Giono’s daughter said that because this was, at that time, the only fish that was leftover and able to be driven the 60-mile mountainous road separating Manosque from Marseilles fishing harbor.

Except the tuna fish and, possibly, a few “compulsory” vegetables (onion, lemon, tomato), it is the typical dish where you put whatever you have in your garden or whatever you found in the market. For 4 servings, I used:
1 big red onion, thinly chopped
4 big carrots, cut in slices
A large bunch of sorrel leaves that survived under the snow (or spinach in the recipe that inspired me)
1 fennel, thinly sliced, with feather greens used for the marinade and the decoration
2 big tomatoes, peeled and sliced
2 organic lemons, carefully washed and sliced
2 thick slices of tuna fish (covering the whole surface of my pot), previously marinated in olive oil with fennel greens fennel seeds, salt, piment
1/2 bottle of Provence wine, rosé (in my case) or white
Olive oil, fennel seeds, salt, piment d’Espelette

It cannot be as simple as that.
First slightly color 50% of the chopped onions in the olive oil;
Then, place by successive layers 50% of the ingredients above, from the carrots to the lemons and in the order of the list, adding a pinch of salt and piment between each layer; 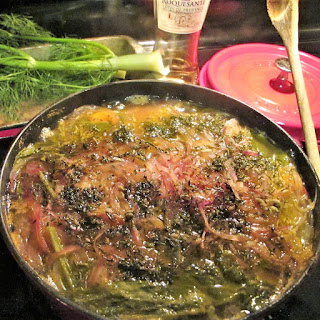 Place the tuna fish, with its marinade;
And repeat the operation with the remaining 50% of each ingredient, in the reverse order this time, from the lemon to the onion.
Pour a generous dose of olive and cover with the wine;
Then, like for a bouillabaisse, put to boiling, then let simmer, lid on, for at least 2 hours. You can eat it then, but like many stews, it will be even better if it rests overnight for instance, allowing the tuna fish to absorb all those flavors and literally to “candy” in the wine, the olive oil and the vegetable juice. After it rests, cook it another hour, with the lid off (those flavors as soon as you remove the lid!!!) towards the end.
I served it with croutons sautéed in olive oil with crush garlic, and of course, with a rosé de Provence…

Even though this was Winter in Ohio, we heard the cicadas!