THREE WAYS OF EGG IN ONE ORIGINAL DISH

Soy Sauce Marinated Yolk, Placed in a Savory Meringue and Surrounded by a Savory Sabayon 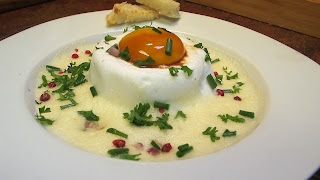 This dish uses three eggs (it could easily be reduced to two) per serving and originally combines three slightly out-of-the-(egg)box techniques to "cook" an egg: with soy sauce, sabayon, and microwaved meringue. It could make an unexpected breakfast or an original starter:

For the marinated yolk: 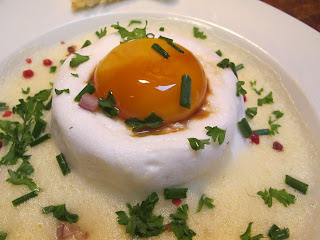 For the sabayon:
For the savory meringue: Presentation: 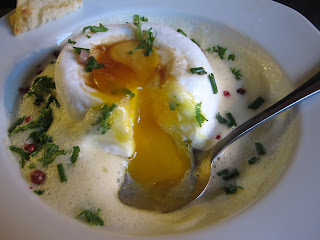 You may find the savory meringue taste a bit blend by itself. However, its foamy texture brings an amazing sensation in mouth and mixed with the tastiness of the marinated yolk and the unctuosity of the yolk, there is something magic into it, and in any case very pleasant, taste- and texture-wise.
Moreover, it is much easier to realize than to describe the process, and much lighter than fried eggs, due the absence of fat to cook it and because its whole aerial texture.

I adore that! I will have to try it as a dessert... with Champagne in the sabayon?
egg starter