THE SARDINE THAT BLOCKED THE MARSEILLES HARBOR 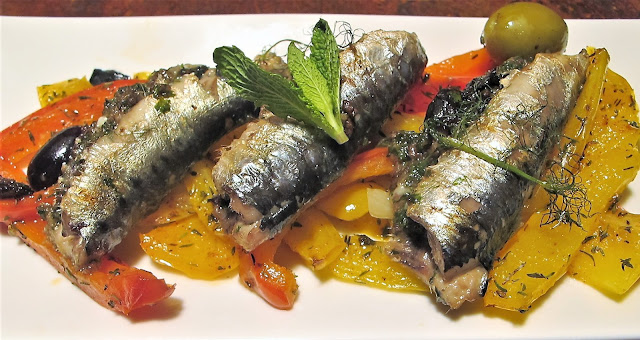 The sardine, with the mackerel I featured previously, is another very popular fish in France, probably the cheapest one, which may explain its popularity. It is true that, under the current standards, the sardine has some drawbacks: its small size, hence a high ratio bone/meat, and a fishy smell. Let's address first the latter point. Yes, it has a strong fish odor, you may like it or not, but it has nothing to do with the smell of non fresh fish. For me, they just smell like the sea... and I love it! And as some Maine's fish mongers would say, once you cut their head, they don't smell anymore...

Yes, the sardine is a very popular fish and a staple of the summer barbecues in France, somehow the "chipolata of the sea". I even used to cook them in my first flat in Montmartre in Paris, on the window ledge, thanks to a mini cast iron barbecue that a smelting company client gave to me. The sardine is popular everywhere in France, including on the West coast (Oléron island, Brittany) where an important canning industry has developed. The best sardine cans are considered as high end products and it is recommended to keep and mature them... like good wines!

But it has become the symbol of a region and in particular a city. The region is Provence and the city is Marseilles. The sardine is also, and obviously, largely fished in the Mediterranean sea (it is named after the island of Sardinia) and people of Marseilles are said to always exaggerate "a bit", the famous galéjades, where everything is more beautiful or bigger in Marseilles. And is true as far as the sardine is concerned, as testified by this very famous sardine that was so big as it blocked the harbor of Marseilles, back in the 18th century... Except that the said sardine was in fact the Sartine, a ship named after Antoine de Sartine, the navy ministry of Louis XVI. After a navigation error, the ship sank in the mouth of the harbor and blocked it for a while.
That said, on top of blocking the harbor, sardine is also a fish specialty of the area. Twenty-five years ago, I had some in a small bistro restaurants in a village of the Cannes or Nice hinterland, stuffed with mint and other herbs and simply grilled.  Those were so good as I regularly tried to replicate this recipe when I have the chance to find fresh sardines. This was the case yesterday. Here is my recipe, inspired by this 25-year old memory. Note that the sardine's alleged cons, the bones and the strength taste, are here largely mitigated or leveraged thanks to a meticulous boning process and to the use of mint.

For 4 servings, as a starter or a small entree: 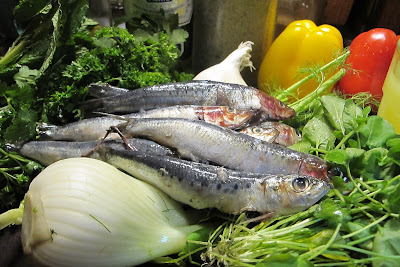 * approximately the same quantity of each vegetable, so that after addition of the crumbs, the cheese, the olives and the oil, and after blending, there is at least the equivalent of 12 tbsp. of stuffing mix (1 tbsp. per sardine) 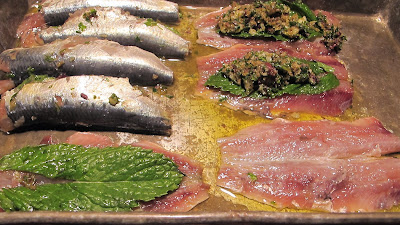