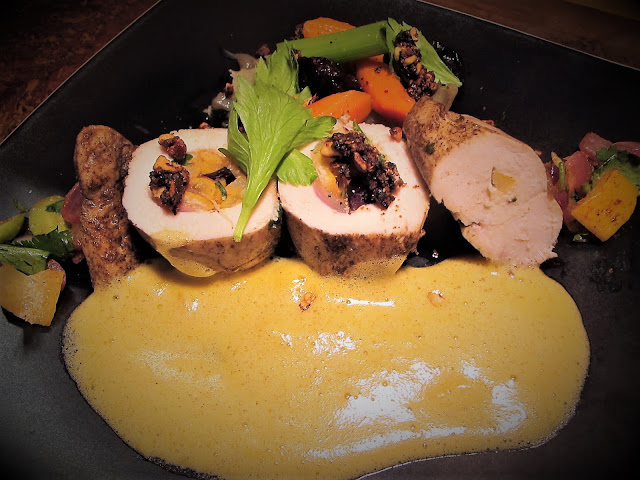 From Jordan almonds to "Morocco" almonds

For this recipe, I was inspired by a French chef, Gilles Épié, and his low temperature-cooked chicken breast with a lemon emulsion sauce and crushed dragées...
I kept the idea of the low temperature cooking, I kept the idea of the lemon sauce, but I didn't have dragées and, honestly, although this is something that is not unusual, I was not sure of the pinkish/blueish/whitish colors!!!
So, as I had almonds, I decided to replace the dragées buy lightly candied crushed almonds. Not that different, but more authentic in my view. Moreover, those almonds and the lemon sauce led me to Morocco and to a tagine-inspired dish. Preserved lemon/olive/onion and almond/prune/carrot are some of the most common tagine association and I decided to associate them... 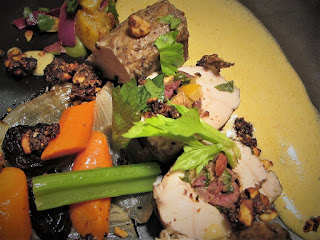 4 chicken breasts, rather big, skin off
2 organic lemons
4 carrots... +1 to push in the stuffing!
~50g of whole almonds
2 tbsp of brown sugar
12 prunes
chicken broth (homemade or stock)
A "bunch" (I never measure it!) of ras-el-hanout
1 red onion
olives, green and black
1 stem of celery
Cilantro

First of all, those are not ballotines, where the chicken breast is cut to form like a wallet (this is the technical term used in French: portefeuille), flattened between parchment paper sheets, filled up with stuffing (an infinity of possibilities), rolled in a transparent cooking film, and poached in boiling water, a court-bouillon or a broth.
Nope! I just made here a narrow slot inside the chicken through which I stud my stuffing. Before that, it is advisable to season the breast, with salt (on top of seasoning, it also firms up the flesh and facilitates the stuffing process) and, in this case, ras-el-hanout of course for the tagine flavor.
I stuffed the breast with a mix of preserved lemon, green/black olives, roasted red onions and cilantro, all roughly chopped together like a brunoise, not too big to fit into the slot. Funny enough, I tried different techniques to stuff those breasts, cannoli forms, my finger, but what I found eventually the most practical was... a carrot!
I cooked slowly the stuffed breasts in a pan, burner on 3, with a little bit of olive oil to start with, then a few millimeters of chicken broth (made from the chicken bones) on the bottom of the pan, lid on, no searing, no aggression, just gently cooking, which allows the breast to remain moist and tender.
I cooked the carrots the same way, adding the prunes for the last five minutes. 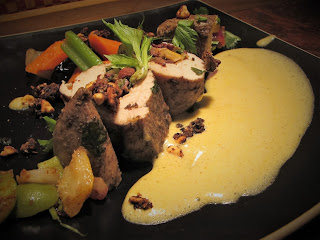 This is in fact a kind of hollandaise sauce. Ii started with a sabayon: 2 egg yolks whisked above a bain-marie, completed first by 2 tablespoons of a mix made of 2/3 of chicken broth and 1/3 of the lemony salted water* in which I "fast-preserved" the lemon, and progressively with a little bit of this mix as the sabayon was thickening and seasoned it with ras-el-hanout. I added then some olive oil (but clarified butter would work fantastically too) and whisked the whole like a mayonnaise. Before serving, I diluted this hollandaise with the necessary quantity of broth mix to reach the wished texture and, important, let it rest 5 minutes to come to this foamy look.
* lemon juice could be used too, but in moderate quantities to avoid too much acidity

I served the chicken breast segments with the carrots, prunes, a stem of celery, some stuffing leftover and this brilliant sauce, with some crushed candied almonds spread all around.
chicken entree