A FISH THAT I LOVED LONG BEFORE TASTING IT [1/3] 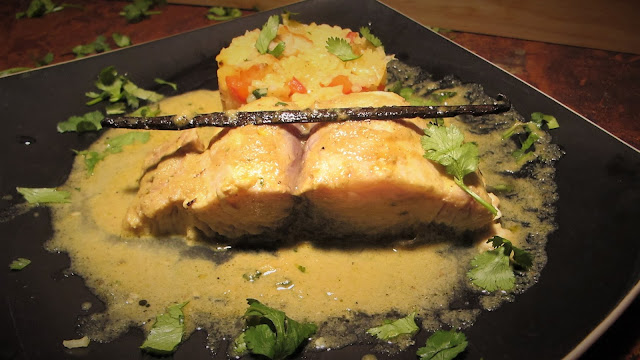 The Mahi-Mahi, or “Dorade coryphène” in French, is this big and delicious fish living in tropical and subtropical waters worldwide. But before all, this is a mythical fish for me, as I have loved it many, many years before I had a chance to taste it. In fact, I started to love it since I was a young teenager, passionate about sailing. I was sailing and racing every summer vacations on the family's planing dinghy in an island on the French West coast, and during the rest of the year, I was sailing around the globe on Joshua, a 50 ft. steel ketch… vicariously! More seriously, I was devouring books telling the stories of Bernard Moitessier, of the “Damiens” or other adventurers sailing around the world.
Bernard Moitessier was the owner of Joshua and a participant of the first ever single-handed round-the-world non-stop yacht race in 1968-1969. He was about to win this race, but after he passed by the Cape Horn, instead of “making a left” and returning to the finish line in Great-Britain, he elected to continue his longue route (the title of his book) to Tahiti through the Southern Atlantic, Indian and Pacific oceans, as he was more attracted by the sea and the loneliness as a philosophy of life, than animated by a competitive spirit… 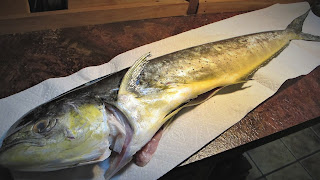 Competitive, this is quite relative since the eventual winner, Sir Robin Knox-Johnson, set a first mark of 313 days. For the record (this is the exact word), it took 42 days in December 2017 for François Gabart to complete the same route in solo, on a giant trimaran. There were plenty of other anecdotes during this race, the most tragic story being the one of Donald Crowhurst who secretly abandoned the race while reporting false positions (there was no GPS then) before committing suicide.
OK, but where is my mahi-mahi? Well, here is the point. Moitessier wrote this book that I devoured as a teen, about his 1,5 year trip around the world, a mix between sailing stories and philosophical thoughts. The sailing stories were also fishing stories since there were (and, as far as I know, still are) no grocery stores in the southern seas… One of Moitessier’s favorite (or easier?) catches was the mahi-mahi that he was preparing à la tahitienne (raw, macerated in lemon juice… as far as he had some!). Since then, I have been loving the mahi-mahi, but it took probably 40 years before I was able to taste it for the first time!!!

This one was not prepared à la tahitienne, but à la réunionnaise (from this French island, close to Madagascar, in the Indian ocean). 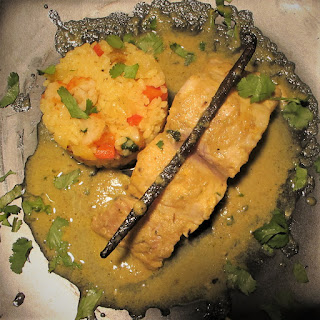 I first prepared a sauce by sautéing in 50% sesame oil, 50% coconut oil, onions then shrimps with their shells (I wish I had the heads, too, this is where you have all the flavors). I added some spices (fresh ginger, turmeric, cayenne, cilantro stems, cloves…) and I flambéed it with a generous dose of white rum. After which, I added coconut milk (since, I didn’t have any, I made it from desiccated coconut that I macerated in hot water before blending it in the Vitamix, almost perfect) and let it simmer, lid on, for quite a while, so that it developed all its aromas, before straining it. This sauce was a real blast!!!
I grilled the mahi-mahi steaks, after having macerated them in lime juice (was I influenced by Moitessier?) à l’unilatérale, i.e. on the skin side, and finish to cook them in my coconut sauce. As they were slightly undercooked after grilling, I finished them for a couple minutes in the hot sauce, which proved a relevant moved as the fish gained in flavors and in moistness... in fact this is what you do when you cook a veal blanquette!
Before serving, I added fresh vanilla in the sauce (a full bean), and I served the fish with some rice ” (translated: cooked like pasta), in which I added bell pepper and pineapple small dices, chopped shrimps (those from my sauce), and spicy curry and turmeric.

Bernard Moitessier would have loved it!!!