Pot-au-feu of vegetables with a marrow croûton 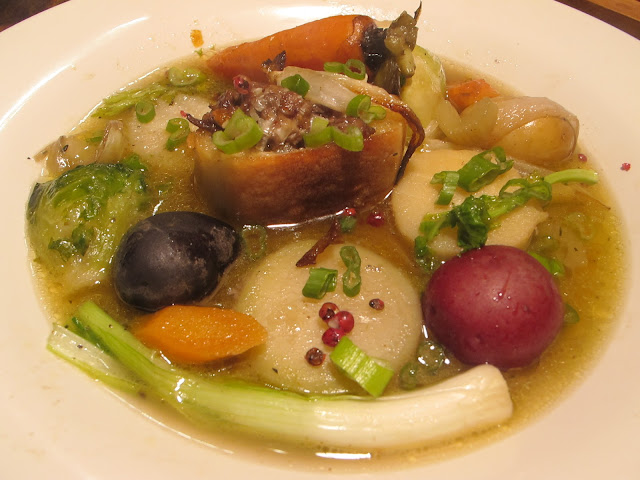 "Pot-au-feu" (pronounced "pɔ.to.fø", literally pot in the fire) is a traditional French dish, maybe the most traditional you may think of, which consists in a broth in which (different cuts of) beef meat and various vegetables, plus, very important, marrow bones, are simmering together. The meat, the vegetables and the broth are then served together. Well, if you want a good pot-au-feu, it is a little bit more complicated than that, but the principle is here.
For the record, it is said that the Vietnamese pho is originated from the pot-au-feu, when the French were colonizing Indochina. In fact, the way to pronounce "feu" and "pho" are quasi-identical and the principle of the pho is in fact very similar to a pot-au-feu, with of course some very specific Asian flavors... 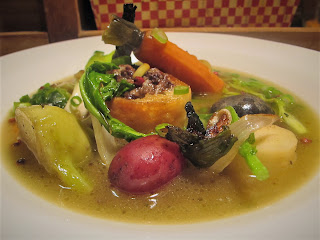 There are indeed many variations around the pot-au-feu, including, like often with those iconic family meat dishes (couscous, choucroute…), fish versions.
Here, I simply made a vegetable pot-au-feu, with no meat (and no lamb) except marrow, served on a croûton, from the bones used for the broth.
Some tips that I used:
I made a broth with the bones, as mentioned above, and all the skins, trims and greens from the vegetables, plus the still-surviving herbs from our garden, bay leaves, rosemary, sage, tarragon, and also cloves.... Altogether, it had simmered for 4 hours.
Regarding the vegetables, I used carrots, Brussels sprouts, kohlrabi, parsnip, turnip, celery, green onions, new potatoes (purple, red, white), onions... Instead of cooking them directly in the broth, which generally causes the vegetables to be mushy, I cooked them with butter in a pan, basting them regularly with the broth, till each of them, separately, reached its ideal cooking status. Except for the potatoes that were steamed above the broth. I just needed to heat up the vegetables before serving.
For the croûton on which I spread the marrow mixed with very finely chopped green onions, I cut quite thick slices of baguette, so that they "emerged" from the broth, and I grilled them in oil, in particular the bottom so that it remained crispy when soaked in the broth.
entree vegetables