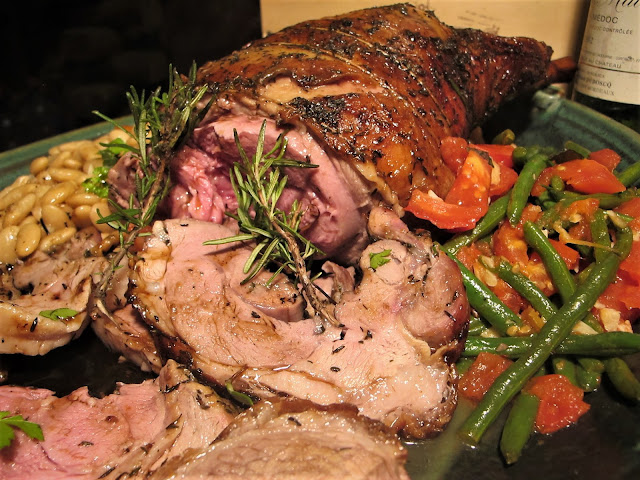 ALERT !!!! EXCEPTIONAL MEAT !!!
Lamb is a very coveted meat in France, and more particularly the lamb leg is considered there as the “Rolls Royce” of meat, above the beef fillet. And in the “Rolls Royce” line-up, the pré-salé lamb is the “RR Phantom”, i.e. the upper end one. This is an expensive product coveted by the greatest restaurants in France due to the fabulous taste and tenderness of its meat.
The accents are important as “pré-salé” doesn’t mean “before a sale” or whatever, but “salt meadow” in French. Thus, the pré-salé lambs are raised in some salt marsh meadow areas in France, especially near the Mont Saint-Michel in Normandy and the Bay of the Somme in Picardy. The sheep grazes in pastures that are covered by halophyte* grasses with a high salinity and iodine content, causing the meat to have a distinct taste and moist that makes it a real delicacy.

Mine lamb leg didn't come from France, but, through dartagnan.com from the Gaspé Peninsula of Quebec where farmers have been able to reproduce the pré-salé environment through a proprietary process and a special diet that includes seaweed. The resulting salt meadow lamb is unlike any other lamb you may have tasted. 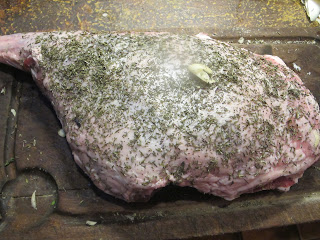 As we had a family gathering yesterday with relatives coming from Texas and from Colorado, and I wanted to expose them to some “iconic” French specialties. Thus, we had a mussel églade as a starter, a pré-salé lamb leg as a main dish, and Bordeaux cannelés as a dessert. I will developed soon the first and third dishes in this blog.
As for the lamb leg, I served it with “haricots tarbais. A French heirloom variety of beans from the Pyrenees area in France, the only one benefiting from an origin label, and with green beans. The lamb leg was rubbed with garlic, salt (despite its origin, the meat is not particularly salted, or it is imperceptible), thyme and BBQ’d on an electric powered rotating pit. I regularly brushed it with stems of fresh rosemary during the cooking (~50/55 minutes + 30 minute rest). For the Tarbais, I didn’t use the “old method” of soaking them (this contributes to their “musician” capacities), but I rinsed them, cooked them first in cold water till boiling, then let them rest out of the burner for an hour or so, strained them, and cook them again with the lamb leg extra fat, onions, carrots, parsnips, bay leaves, cloves… covered by water and simmered for around two hours or till your wished texture (here, still a little bit crispy and not mushy at all).
Delicious!!! The meat was like butter, to borrow one of my guests’ expression!
The wine was a Château Sociando-Mallet (Haut-Médoc) 2002 from my reserve.
If you like lamb and you want to indulge yourself, do not hesitate… Between you and me, it is much better than turkey!
* The term halophyte refers to plants growing in a salty environment, where most of plants cannot grow or would be burnt by the salt.
entree lamb