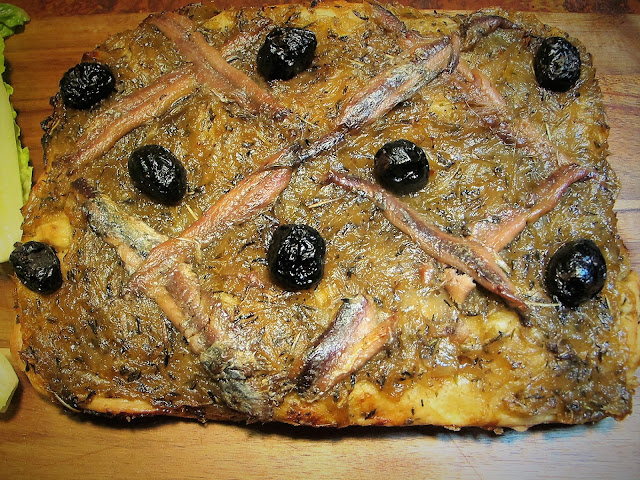 The pissaladière is a specialty from Nice and its area on the French Riviera. To make it simple, this is a pizza without tomato, consisting of a pizza-like crust topped with a bed of slowly cooked onions and with anchovies and/or olives. But, please, if you go in the Nice area and if your meet with Niçois, the inhabitants of Nice, don't tell them that... The Niçois might not be so "nice" then!
I know, you will tell me that pizza and pissaladière comes from the same word... and that "z" and "s" are practically the same. For instance, an "s" preceding a vowel is said "z" in French. If this is not a proof!!!
And no, it is not. Etymology have some detours and subtleties where two very similar words referring to two quasi similar dishes (and here, I am not talking a pineapple pizza!!!) have nothing to do together.
Pizza refers to a word meaning bread that you can find in pitta in the Middle-East. Here, correct me if I'm wrong, the "t" became a "z" when moving to the West. But the "z" didn't become an "s" when moving further to the West. In fact, pissaladière comes from pissalat. "So what?", you said. Yes, but pissalat came from the old Nice dialect "peis salat" which means "salted fish" ("poisson salé" in today's French). No bread at all there!!!
The story of the pissaladière is that the pissalat was a very coveted dish, but it also had a very strong fishy taste as it was made with all the parts of the fish mixed with some kind of paste. This is why it was associated with onions, the sweetness of which was cutting through the strength of the fish...
Practically speaking, to make a pissaladière, you need to:
1/ cook finely sliced onions (here, for two servings, 1.5 big white onion!) in olive oil, with herbs, garlic, a bit of sugar, but not salt at this time, first because the anchovies and the olives are very salty, and also because salt will have for effect to color the onions and you don't want that. This is why you cook the onion slowly, for 1.5/2 hours till looking like a jam,
2/ make a bread dough to which you add olive oil (so, yes, a pizza dough) and a tiny bit of sugar, and let it rest and rise up for the time the onions are cooking,
3/ remove the bones, if any, and unsalt the anchovies by soaking them in milk,
4/ when onions are like a jam and the dough has risen up, flatten the dough with your hand (like a pizza

;)) on a floured/parchmented oven plaque, giving it the form you wish (generally rectangular), spread the onions on the dough, disposing the anchovy fillets in a criss-cross pattern and/or the olives, and bake for 10 minutes in a preheated 450F oven, then another 10 minutes at 350F.
5/ Let rest and savor lukewarm with a simple lettuce and an olive oil vinaigrette...
starter