MIRROR MIRROR ON THE PLATE 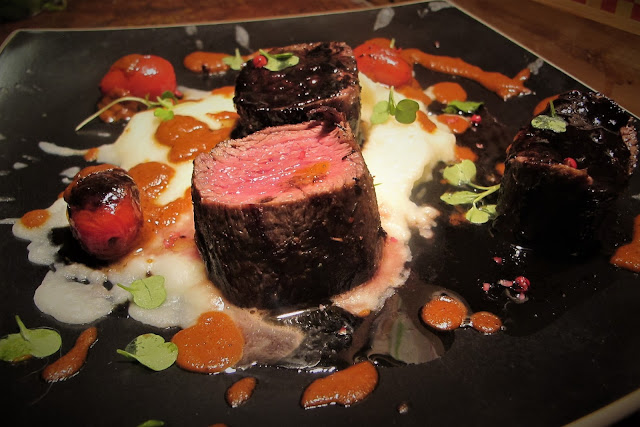 Philippe Conticini is considered, with Pierre Hermé, as one of top two French pastry chefs in France, and so, probably, in the world. When I say he is one of the top two, it doesn't mean that he is the second one, it is more a tie, in any case this is how the French pastry industry considers them, with two different profiles, a little bit more creative for Hermé, a little bit more technical and pedagogue (watching his videos is a pleasure, everything seems easy) for Conticini...
But Conticini was also trained as a chef and he is known, and renown, for applying cooking techniques to pastry making... But he also does the reverse and applies pastry techniques to his cooking, like here, this purée* literally whisked like a Chantilly in which he ads very progressively hot milk and butter to obtain this amazing emulsified (the French term is "foisonnéee") purée. I still have to perfect the technique, in particular the texture, but the taste is amazing. I am a great fan of Joël's Robuchon purée, but this one, totally different in its making, is a blast too.
What I also like with Conticini is his attention to the details. For instance this recipe includes a meat sauce and a tomato coulis. For him, when making those two sauces, which (not so) anecdotally are the longest parts of this recipe, each gesture is important, such as bringing regularly the cooking tomatoes from the circumference to the center to maximize the cooking phase and the concentration of tastes, or deglazing and scratching avidly any gram of caramelized meat juice remaining in the bottom of a pan.
His third characteristic, which is a consequence or the counterpart of the second one, is an extreme simplification. For instance, for this recipe, he doesn't use any of those commonly used additional ingredients, no thyme or other herbs, no onions, no garlic, no pepper, no condiments... Just: (1) salt that he spreads with parsimony and, often, at the end just for the required quantity to enhance the taste (and surely not to salt!), and only once he has obtained, to borrow his expression, the right structure (of a sauce), and (2) balsamic vinegar that he instills drop by drop (another pastry chef reflex) till he gets the right result, meaning the result that his hyper developed palate approves.
So here it is: Mirror (because of the glazed appearance and the thick texture of this long reduced meat sauce) bistro fillet steak, sour tomato sauce, emulsified potato purée... I should confess that I didn't follow exactly his recipe as I was not able to stop myself from adding garlic in the purée, thyme on the steak and piment d'Espelette in the tomato sauce. I also used red wine where he used vegetable broth... but I don't think this is a downgrade...

* In French, purée, when used by itself, refers always to potato purée, i.e. mashed potatoes, but with a very smooth textured, while écrasée de pomme de terre, which is literally the translation of mashed potatoes, is of a rougher texture. I love both!