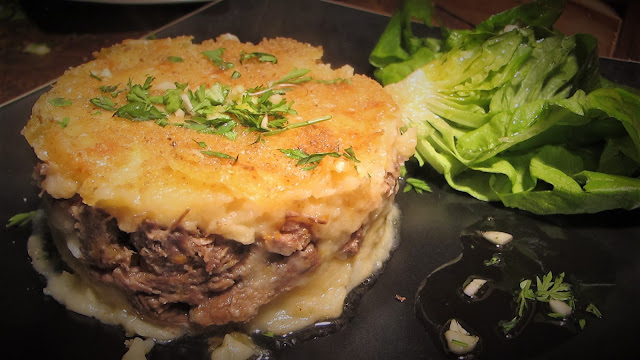 Antoine-Augustin Parmentier, the man behind the French fries.

Without Antoine-Augustin Parmentier, who knows if the fries would be "French"? The story of how the potato, an endemic root from America found with difficulty, surprisingly, its way in France is quite interesting.

When potatoes were first introduced to Europe by Spanish navigators at the end of the 16th century, they were not popular at all, and just considered as food for cattle.


In fact, there was a religious belief attached to the food: all food growing in the air (cereals, fruit, greens) were good, and all food growing in the soil (roots) were bad. This Dr Jekyll and Mr Hyde symbolic is easy to understand, on one side the air, the sky, hence heaven, and and on the other side the dirtiness, the darkness, hell. Consequently, potatoes were bad and suspected to carry diseases like leprosy...

Long after that, in the second half of the 18th century, a military pharmacist named Antoine-Augustin Parmentier was exposed to potatoes after he was made prisoner by the Prussian army. When back to France, he made everything to promote this root, including preparing a menu for the French king, exclusively made with potatoes. But people were still reluctant to consume this devil's food. Then, he had a brilliant idea, showing that he had a good knowledge of human condition: he grew potatoes in vegetable gardens in Paris, but had them secured by an important number of guards during the day, as if those were very precious ingredients. But during the night, miracle, there were no guards and people sneaked into his gardens to steal this so valuable food... What followed is easy to predict, and this is probably why we now have French fries, but this is another story

The Hachis Parmentier or the French art of using leftovers

Parmentier also gave his name to the hachis Parmentier, a dish made of, and alternating, layers of mashed potatoes and shred meat (generally, a layer of potatoes, a layer of meat and a layer of potatoes, but it is variable, the only constrain being that the top layer shall be potatoes), topped by comté or gruyère cheese and possibly some breadcrumbs, to obtain a nice gratin, plus a "veil" of grated nutmeg for the taste and because this is always a great match with gratinéed dish.

The hachis parmentier can be made "from scratch", using ground beef seasoned like for a Bolognese sauce, with onions, tomatoes, herbs... But it is even better when it is made with leftovers of beef stew, such as pot-au-feu, boeuf bourguignon, daube... In this respect, the hachis parmentier is the prototype of the French art d’accomoder les restes (or the art of using leftovers).

But it can also be made with duck confit, excellent, and I ever made one with chicken leftover. And a turkey parmentier would probably be a perfect dish to use the turkey and mashed potatoes leftover after Thanksgiving! This dish is excellent with a just salad (frisée, dandelion…), topped by a garlic vinaigrette. Personally, I like to top it with a roasted slice of marrow, and in this case I use the marrow fat to season the potatoes and/or the side salad vinaigrette. 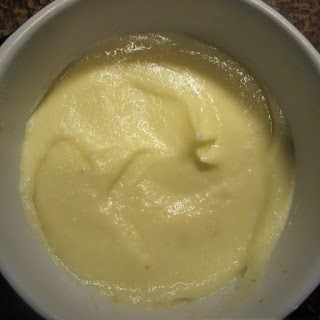 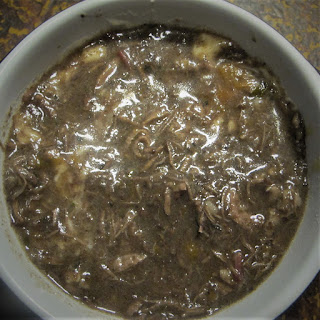 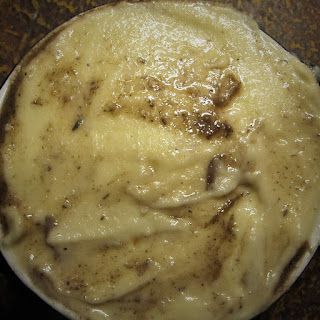 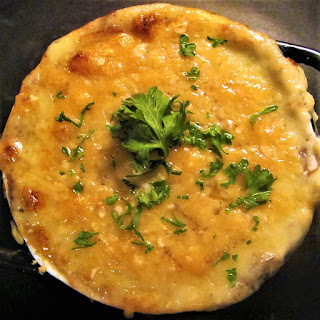 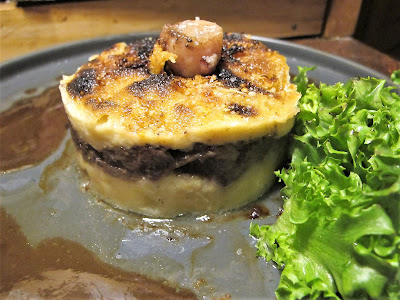