DUCKLING WITH PEARS AND HONEY 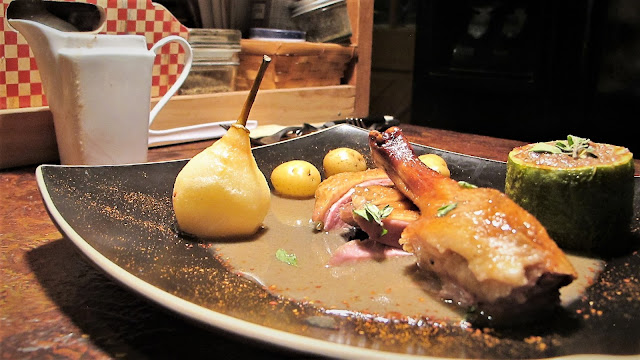 As we just celebrated Thanksgiving, here is what I served for lat year's Thanksgiving: a "turkey à la française". This recipe was given to me by a cycling friend, Serge, who happens to be a chef in France. His recipe was originally with cherries, but I already adapted it with figs, peaches, and of course, it can be made with oranges. 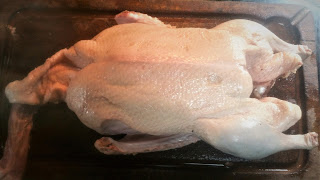 This duckling (a young duck female) was weighing around 5/5.5 lbs. This was a whole Rohan duckling delivered by D’Artagnan, with its liver, gizzard, heart and neck.
Stuffing:
I made a stuffing with the duckling (big) liver, pear, zucchini/yellow squash, shallots, herbs and milk soaked/strained bread. I process it roughly in a blender and pour it inside the duck, closing the two extremities of the bird with a cooking string.
Pre-cooking:
I lightly rubbed the duck skin with salt and placed it in a 400F preheated oven, for 35/40 minutes, turning it regularly and brushing its skin with a mixture made of wine (Sauternes) and honey. After 35/40 minutes (to adapt depending on the bird’s weight), the duckling should be cooked at around 70%, i.e. still really rare. I coated it again with the honey mixture and let it rest under a foil for around half an hour.
Then, I took out the stuffing and reserved it in the fridge, and proceeded to the carving, keeping the legs, the breasts and the wings, reserved in the fridge, on one side, and the carcass on the other side. I cut the carcass in 4 or 5 pieces.
Sauce:
Like in the duck à l'orange, this flavorful sauce is key to this recipe. I heated a little bit of duck fat in a pot and added the carcass pieces, with the duckling neck saved at the beginning, an onion, some carrots, turnips, parsnips or any other flavorful vegetables, and herbs (thyme, bay leaves, sage…). I stirred the whole regularly so that it doesn’t stick, and of course doesn’t burn. When hot enough, I added a shot of Cognac and flambéed it. Then added 2 glasses of dry white wine and when hot enough, flambéed it again. The purpose of flambéing is to eliminate the alcohol and to keep only the taste and the roundness of the Cognac and the acidity of the wine. I covered with water and simmered this broth for 1 or 2 hours. It should reduce at least by half. Then, I strained the broth, kept the neck for another day (to stuff vegetables for instance), and recuperate the strained broth that I continued to reduce for maybe 30/40 minutes. It should start to take a “coating” aspect.
Final cooking:
While the juice was further reducing:
1/ I cooked mini fingerling potatoes in a pan covered with the duckling juice;
2/ I peeled and poached whole pears in Sauternes wine with a tiny touch of vanilla;
3/ I finished cooking the reserved breasts and legs in the oven, # 300F, coating them regularly with the honey glaze, for around 30 minutes; 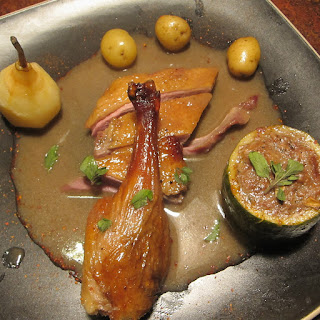 4/ I carved zucchinis and/or yellow squashes to make a small edible container (which I called a “petit pot”) of 1.5/2 inches high, salted/peppered the inside and placed them in the oven for around 15 minutes. Then, I stuffed with the reserved stuffing and roasted them for another 15 minutes in the oven;
5/ I prepared a gastrique with honey and balsamic vinegar (or sherry vinegar), added 2 or 3 tbsp. of a pear/cranberry compote prepared in advance (in fact, the one used for the foie gras served on chestnut crumble) and a generous cup (to adapt) of the reduced sauce, and let the whole reduce gently;
6/ Time to plate the duckling after a last honey brushing, its sides and the sauce… and to savor it.
Merci Serge!
duck entree