A travel to Lorraine and to childhood 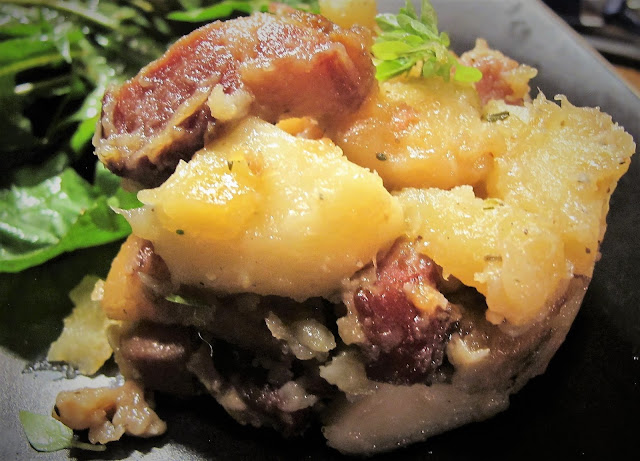 Patates au lard simply means potatoes cooked with bacon. This is a genuine family recipe inherited from my mom, my grandmother, my great grandmother... and one of the first two "real" dishes that I learned to cook. The other one? Ratatouille. A next story, very soon...

Potatoes slowly and long time cooked with and in smoked bacon with onions, garlic, herbs and served with a frisée salad. It requires slab bacon, called poitrine fumée in France cut in big dices, a good quality one, not those injected with water. Eventually, potatoes and bacon quasi melted together... Not sophisticated cuisine, but damn good comfort food, ideal for the cold months to come... Although it is not, stricto sensu, an exclusive dish from Lorraine, it is one of the specialties of the region, and typically from my family home region, the Vosges in Southern Lorraine.

This is a dish that I used to have when, as a kid, I was spending the end of Summer vacation at my grandparents' house. My grandmother was simmering the potatoes with bacon dices, chopped onions and herbs for long hours in a cast iron pot that had never seen water (it was "washed" with salt), with the dandelion foraged by my grandfather.

Simple, just slabbed quality bacon (not the commercial sliced fatty and watery bacon), and potatoes (redskins for instance, not the Idaho, they are too starchy): count around 1 weight unit of bacon for 2 wirght unit of potatoes. For instance, for 3/4 servings: 1 kg of potatoes and 0,5 kg of bacon. Plus: onions, garlic, herbs (bay leaves, thyme and cloves mainly, there is no rosemary or similar herbs de Provence in Lorraine, too much in the North, but I sometimes take some liberty) and long simmering (~3 hours) at low heat, plus 10/15 minutes at a higher temperature, lid off, before serving. It is not a problem if the potatoes stick a little bit in the bottom of the pot, on the contrary. The potatoes take all the tastes and aromas from the bacon and the herbs, and they literally melt in mouth.

I will always remember my mother-in-law, eating for the first time those "patates au lard". She just had a surgery and she had lost her appetite, and a bit of her stamina. I prepared some "patates au lard" at home and we drove 2 hours to her house to serve them to her. She had one one full plate of it and asked for a second one. She became suddenly reinvigorated, physically and mentally. Well, we also brought a bottle of French red wine...
This is the power of good food. Try to do that with a Big Mac! 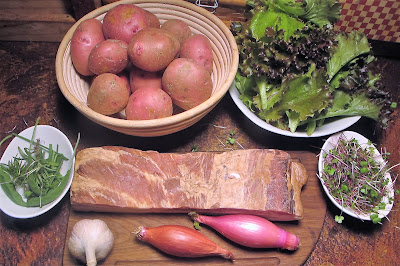 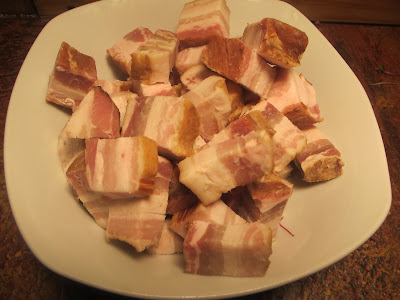 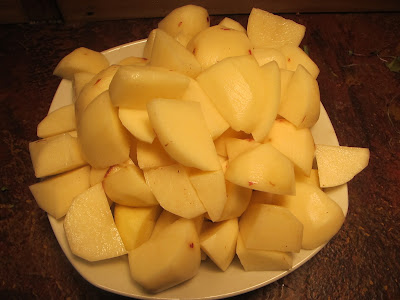 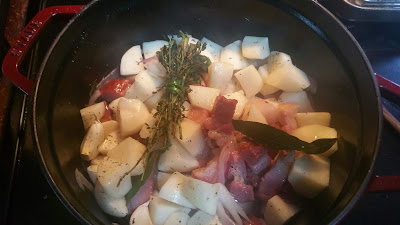 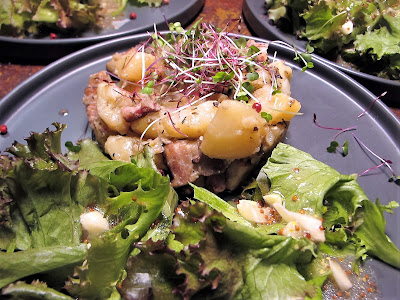 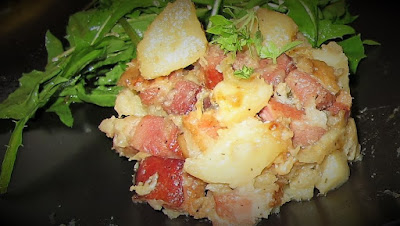