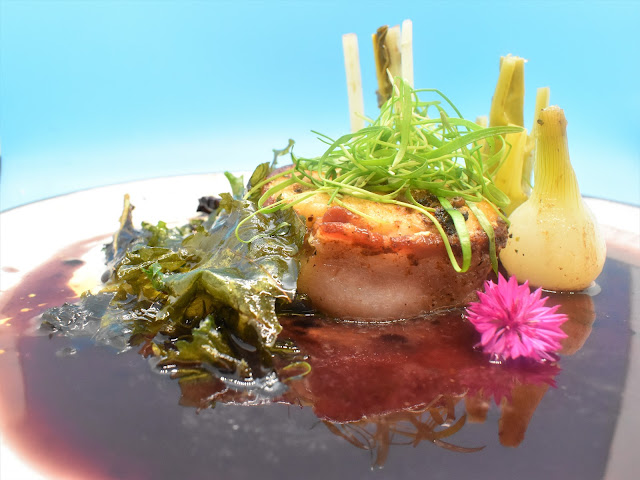 For a change, let's start by the sauce, all the more so as it was a blast, and beyond the sauce, by some Burgundy aperitive definitions... You will understand.
Everyone in the US now knows the Kir, this aperitive mixing white wine and crème de cassis (blackcurrant cream... which, despite its name, contains 17% of alcohol, like Port). Although the legend says that it was invented in the 50's by chanoine (i.e. a priest) Félix Kir, subsidiarily the mayor of the Burgundy capital, Dijon, this is not exactly true. The Kir under the name *blanc cassis *(meaning white wine with blackcurrant) is older, probably invented in the late 19th century after Lejay Lagoutte invented the crème de cassis around 1850. Chanoine Kir just codified it, with its composition calling for the second, rarer and cheaper Burgundy white wine, Bourgogne Aligoté. So, now Kir is known as this refreshing appéritif, excellent with a few slices of saucisson during Summertime, made of around 1 finger of cassis, i.e. around 10%, for 90% (ignore those recipes calling for 1/3 of cassis!!!) of white wine, preferably Aligoté or Chardonnay.
Now, you would rightly ask me what is the link between Kir and my walleye dish. Sorry if I was a bit long... but I like that! It appears that the traditional Kir has been adapted in many versions. To list the most famous of them:
Thus, my sauce was made with red wine and cassis cream for the acidity, flavored with shallots and vegetable trims, reduced, strained and further reduced before being whisked with butter to obtain this bright Cardinal red color!
The walleye filets were rolled on themselves and wrapped in a thin bacon slice, before being gently seared in foamy butter, and served with steamed kohlrabi, green onions and deep-fried kale leaves. Oh, I almost forgot, we drank a real Kir (with Bourgogne aligoté) with this dish!
walleye