My try (rehearsal?) of the mythical royal hare, or lièvre à la royale 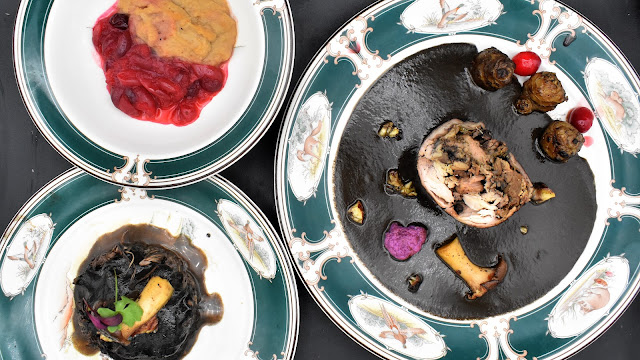 Probably the most iconic and mythical dishes of the French cuisine, much more luxurious than bœuf bourguignon, much fancier than coq au vin, quite more sophisticated than pressed duck, the one dish that would probably get the majority of votes as the most dreamed of one in a French foodies’ survey, is the royal hare, aka lièvre à la royale…

This is also a very old recipe, or I should rather say recipes, as there are two versions and hundreds of variations, which involve the king of kings, the king of chefs and the king of foodies. The king of kings, this is Louis XIV, the Sun King who built Versailles and who was, like often at those times, addicted to hunting and eating game. The story has it that at the end of his life -for the record, and this is a record, he died in his 77th year after a 72-year long reign-, as the king had no more teeth, his chef invented the recipe of lièvre à la royale where the hare was cooked so long in wine as it was literally like a jam… It seems that the recipe was lost till Antonin Carême (funny name for a chef, as it means “Lent” in French), nicknamed “the king of chefs and the chef of kings” (although his career took place after the French revolution), was reported to cook his own lièvre à la royale, known since then as the Carême version. Almost one century later, a French politician, the gourmet senator -well, this is redundant!- Aristide Couteaux published another recipe version that, as he claimed it, he discovered in his home region of Poitou. This has become the Couteaux version of lièvre à la royale.

Those two versions are quite different, although they both require a long and slow cooking process calling for a lot of full-bodied red wine and they both rely on a sophisticated rich sauce 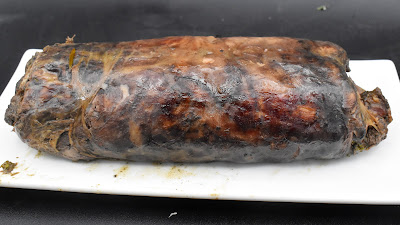 • The Carême version could be described as a big ballotine where the hare is totally boned and stuffed with the animal’s liver, foie gras, truffles, and other varied stuffing ingredients. Carefully wrapped and cautiously twined, the ballotine is poached at low temperature in a red wine marinade for a minimum of one night. The sauce is made from the marinade, possibly completed with some more wine, enriched with the animal’s lung and with foie gras, and thickened by using the animal’s blood. The ballotine is served in relatively thick slices with a generous quantity of this unctuous sauce. 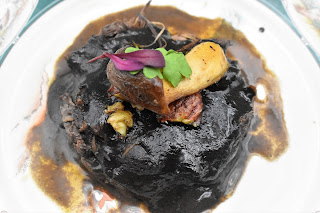 • The Couteaux version is somehow simpler since the hare cuts (sorry, I had to make it at some point), legs, loins… are also poached overnight, then boned and shredded, and served with a sauce similar to the Carême one, with the addition of a significant quantity of garlic and shallots. The “pulled” hare is often served in a bowl, covered by the sauce, or also as a quenelle, or any other shape, fully wrapped and coated by the sauce.

I made an attempt of -and a rehearsal before- replicating the royal hare recipe(s) with a rabbit. Of course, I lost the hare’s gamy tastes, all so more so as my rabbit was a farmed rabbit, but otherwise the principle is significantly the same. It allowed me to train myself, waiting for the opportunity to get an authentic hare. For this test, I made both versions, Carême and Couteaux versions, with the same rabbit: 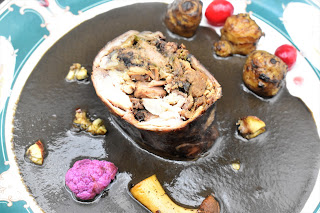 • For the Carême recipe, I used the rabbit’s central body, i.e. the rib and saddle parts, including the very useful panoufles (those flappy parts by the saddle) to form the ballotine wrap. I boned it, cautiously removing the rib bones and the spine with a sharp boning knife, then marinated it overnight in aromatized red wine with the legs. I also started a sauce base with some more wine (Bordeaux, I used three bottles for the whole recipe, counting a few ounces for tipping the cook), aromatizing vegetables and the rabbit's bones and carcasses. I stuffed the rib-saddle square-shaped part with foie gras cubes, chicken livers (alas, the rabbit offal was removed!), porcini, bacon dices, front leg pieces (previously precooked), black truffle paste, herbs (see picture). I wrap this ballotine first in caul flat, then in (latex/chemical free) gauze rolls (sic!) and poached it for at least 15 hours in the marinade at 170F. Before serving with the sauce (see below), I removed the gaze and seared the ballotine wrapped in an aluminum foil, to slightly grill it and to remove (melt) the remaining caul fat. 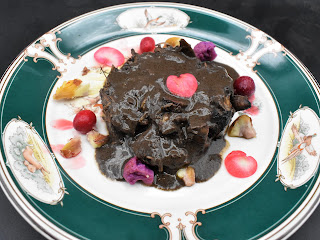 • For the Couteaux version, I cooked overnight the back legs in a pot, covered by marinade, then remove the bones and shredded the meat. I recuperated the cooking marinade that I had regularly completed with portions of my "sauce base" and added to it a first liaison mixture made of blended shallot (1 full head) and garlic (3 or 4 cloves). I let the shredded leg simmer for another couple of hours in this enriched sauce.

• For the final sauces, I made a second liaison mixture with foie gras, chicken liver and chicken liver blood (instead of hare blood, normally) that I blended with a portion of the remaining marinade and cooked it carefully at less than 180F. I mixed part of this second liaison with the Couteaux reduced garlic-shallot sauce and further reduced it, still at less than 180F, to obtain a quasi-syrupy texture, with the help of a tip of arrow rot powder. Same thing for the Carême sauce, I added the second liaison mixture and simmer it to obtain here a normal sauce texture. I also added a few dark chocolate morsels in both sauces.

• I served those versions together, with cider-poached cranberries and a celeriac-apple purée, with some sautéed sunchokes, seared mushrooms, grilled chestnut fragments, and cranberries and pickled purple cauliflower florets

Just for the record, the entire process spanned over three full days, but it was worth it. The Carême ballotine was just phenomenal. Compared to it, the Couteaux shredded legs were a bit disappointing, not their taste, fabulous too, but their texture, not as melting-in-mouth as expected. In hindsight and after some checking, I should have used the front legs for this part, less “tough” than the back legs. 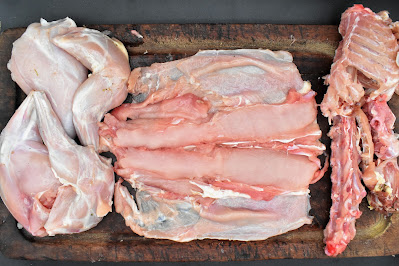 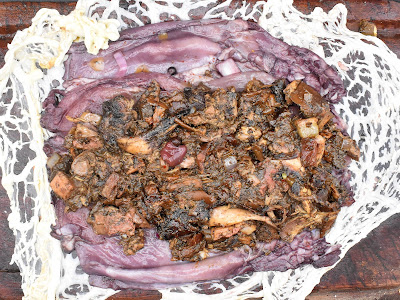 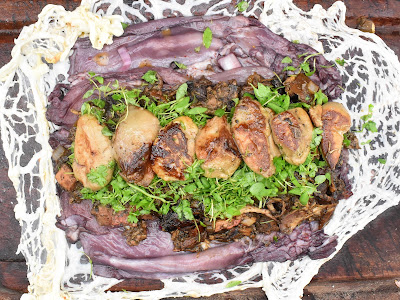 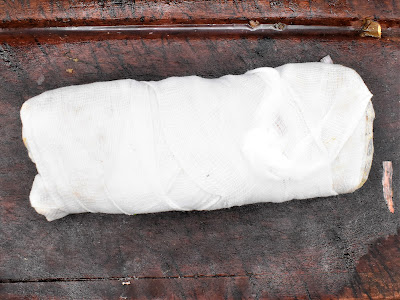 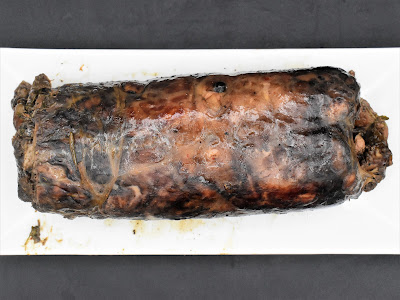 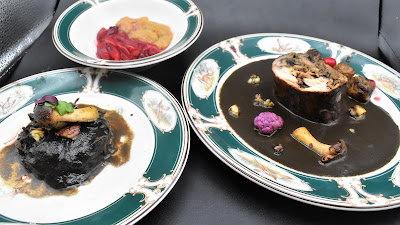