RED MULLET, WHERE SCARE IS A METHOD OF COOKING 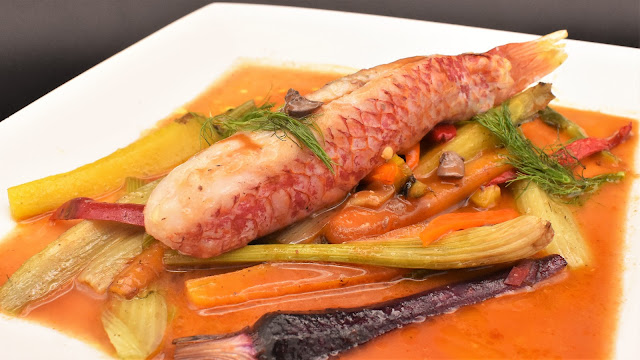 Rouget, aka red mullet in English (but mine were sold as rougets by the NY fishmonger who shipped them to me), is this small fish, looking a bit like a gold fish, but I presume (I never ate gold fish) much, much better than gold fish. In fact, this is a fish which, by its specific taste, its delicateness if not fragility, its particular ways of cooking, is unique, and this makes it an iconic dish of French cuisine (at least).
In fact, there are two fishes named rouget in French, this one, the red mullet, called rouget-barbet or rouget de roche (because it lives on rocky bottoms), and the gunnard or rouget-grondin (because it growls -gronder in French- when under stress!). They should not be confused. If the gunnard is an excellent fish, one of the varied fishes composing a real bouillabaisse for instance, it cannot be compared to the rouget-barbet which is an exceptional fish, found on the greatest Michelin starred restaurant tables in France.
In particular, I stole this recipe from a Paris 2-star chef, Stéphanie Le Quellec, a former winner of the French Top Chef who demonstrated her recipe in one of the show episodes a couple of years ago. I have been dreaming of replicating it since then... till I found those superb rougets. Her dish name "rouget de roche, cuit de peur" says it all regarding the way to cook this little delicacy. Cuit de peur could be translated by "scare it to cook it", meaning that it should be cooked very briefly and intensely. This cooking image also applies to squid, except that, in this case, an alternative is also to cook it "long hours". No long hour option with rouget, just 2 minutes maximum at 400F, and let it rest, that's it.
Before that quick and intense cooking and as I bought this fish whole, non-scaled, non-gutted on purpose (you can fry its scales that pop up like pop corn and you also use its guts, see below), I needed to prepare it. Scaling it, beheading it, gutting it but keeping the tiny livers, removing the central bone while keeping the two filets attached by the tail, trimming, rinsing, dry patting, removing all the tiny little bones with a tweezer (not complicated, but fastidious), "welding" the two filets together with potato starch, wrapping/rolling the fish so reconstituted in a transparent film, and letting it rest in the fridge an hour or so, before the 400F episode in the oven.
Of course, I kept all the trimmed parts, heads, bones, fins, trims, guts... to make a delicious juice with fennel and carrot trims, onion, garlic, rosé wine... Part of this juice was served as is (I hesitated to serve it as a -delicious- soup) and part of it was reduced and mixed with the fish livers to make an extremely tasty sauce. Rouget-barbet is sometimes nicknamed the "sea woodcock" (bécasse de la mer) because, like the game bird, you keep it non-gutted and you use its offal.
I served it with baby fennels and multi-colored carrots just steamed above a bed of fennel greens, with its sauces of course, with a chilled glass in rosé. Could you tell that, despite the lake effect, we felt like on the French Riviera?
Probably one of my personal all-times favorite dishes!!! 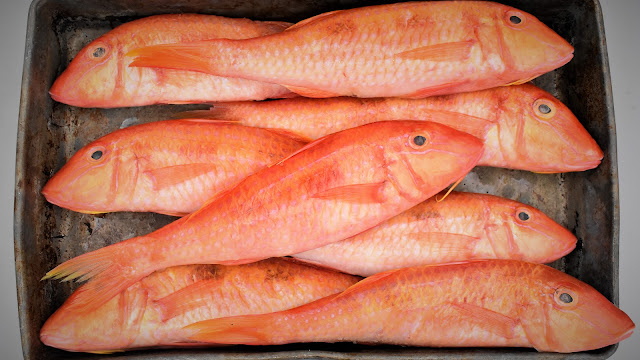 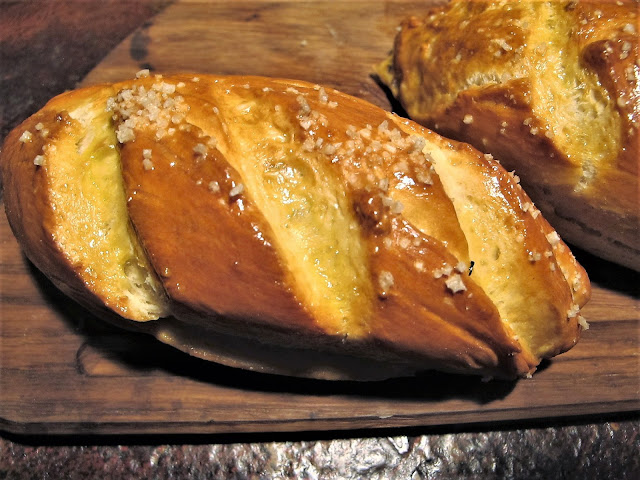