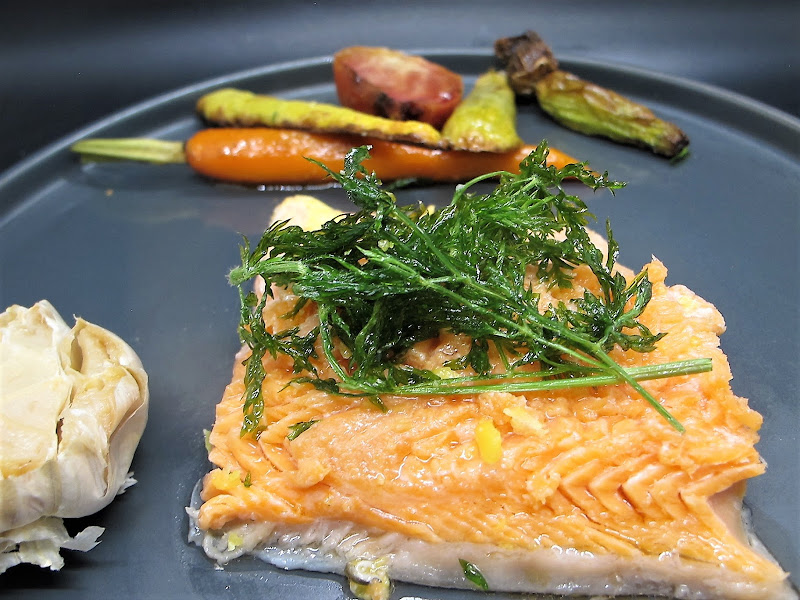 A crazy story: Last January, as I was checking the bets about the new batch of Michelin-starred chefs, I noted with interest that the chef considered as the likeliest to obtain three stars this year was the Alsace’s chef Olivier Nasti. His signature dish is called omble chevalier cuit en cire d’abeille. Cuit en cire d’abeille means cooked in beeswax and Omble chevalier is a fish, somehow the missing link between the salmon and the trout, found, among other places, in the French Alps: in fact, its scientific name is Salvelinus Alpinus. QED. It was also (re-)introduced in other mountain lakes, in the Alsatian Vogesen for instance where Olivier Nasti sources his ombles… Olivier Nasti did not get a third star but, as you guessed it, he enticed me to cook an omble chevalier in a beeswax crust… It just happened that I had a significant quantity of beeswax bought to lube my Bordeaux cannelés copper molds. Added to my current frenzy about cooking meat, fish or vegetables in any type of crust, I was ready for this recipe… except for a minor detail. The fish!!! As there was supposedly no omble chevalier and no hope to find any Alpine freshwater fish in the area, here I am at my usual fish market, looking for salmon or trout filets. The vendor proposed me to buy Arctic char. I never had this fish because, for any reasons, the first of which being my ignorance, I had prejudices against  it. You bet, such a cheap fish… But in this particular case, it was checking all my boxes, not a salmon, not a trout but in-between, and even its price was an advantage. As this was a try and the outcome was uncertain, I did not want to invest in a fancy fish. At hardly more than $10/lb. the Arctic char was a deal and the ideal substitute to omble…

A culinary story: The principle consists in just immerging the char filets in a hot liquid beeswax bath and to let them rest and cook just by the heat inertia, till the beeswax has cooled down and is totally solidified. You can then extract the fish from its wax gangue and eat it like that. Well, this is the theory and how I saw those chefs doing it on videos, except that for my first try, the fish was still a bit too raw and it needed an additional couple of minutes in the oven. With the exception of this point  and of a few other minor things to improve, the fish was perfectly cooked and delicious. A treat!!! I served it with a carrot purée and carrot and rutabaga sticks cooked in either orange or lemon juice, and glazed with honey.

An hilarious story: But the best is still to come. Or if not the best (this was the fish), the funniest. As I was preparing this post, I checked whether there was an English term for omble chevalier, and there is one. You guessed it again… Arctic char!!! Exactly the same fish, living in different areas, from the polar circle to the cold mountain lakes, after an amazing Darwinian evolution. In fact, originally a anadromous fish like the salmon, migrating from the sea into fresh water, the Arctic char was “trapped” in lakes after a period of marine regression and different endemic subspecies have developed in its different habitats, while still falling into the same species.

The moral of those stories: I cooked omble chevalier without knowing it! This was my first experience of Arctic char and of course my first experience of omble chevalier cuit en cire d’abeille. But it was so conclusive as I promised myself to further explore this technique and this dish. I made some other tries, with arctic char, cooked in beeswax, and cooked normally, to check the beeswax real input, with other fish (striped bass), and even with a duck magret. I tried different containers, a wooden box as used by those chefs, a metallic oven dish, a terrine dish... I heated the beeswax in a bain-marie, in the microwave (to avoid absolutely!), directly on the stove or in the oven. I tried different temperatures, from 180F to 250F (and more in the microwave!). Trying different cooking and/or resting time. Et caetera. And as  I was turning into a total fan of the technique, I also improved it.

Many tries: Those tries have confirmed my first impression, my first WOW should I say. First, the look. Because of the low temperature and, I guess, the protection from the beeswax, the Arctic char keeps its beautiful pink-orange vibrant color. Then, the texture. It is literally to die for, a texture that I had never experienced before, melting in mouth, unctuous, fat without being fat,  a bit comparable, like would like, to a qualitative smoked salmon or even a foie gras... And finally, the taste, a subtle taste of honey, without the sweetness, and with something else, a je ne sais quoi that would be called complex apricot notes if it were a wine…

My final recipe (so far): The recipe below summarized my different tries, tests, improvements… using different containers, trying different heating ways, testing the right cooking time… I was obviously inspired by those chefs, in Alsace, but also in Lyon and in Austria, practicing this technique. But my method, at this point in time, is slightly different. No judgement of course, but I would say that it might be, so far, the most appropriate for a home cook and his home cook equipment. Not mentioning the fact that it would not be the first time that chefs would not tell all their secrets!!! 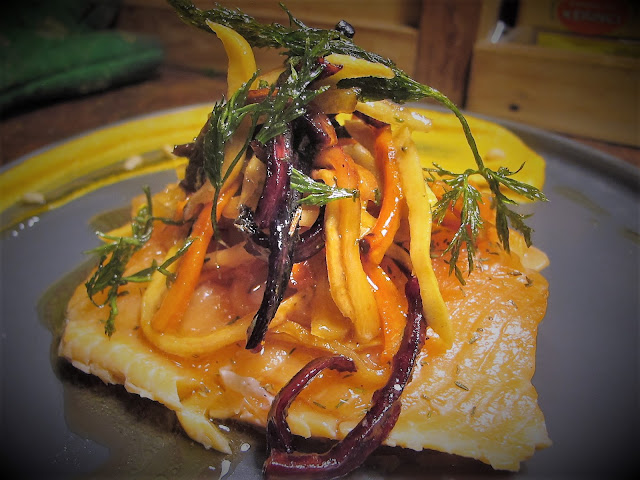 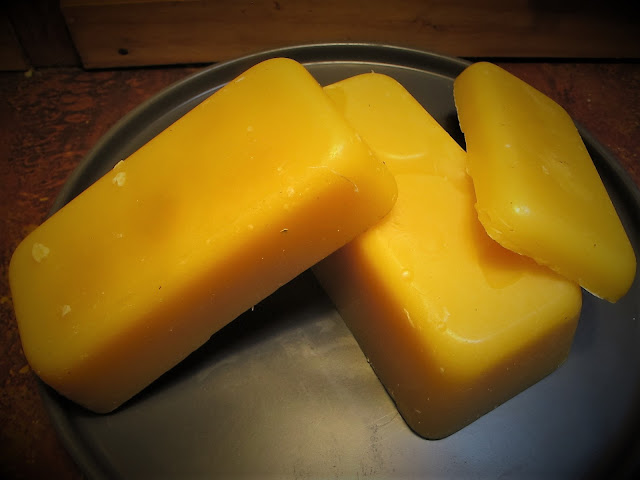 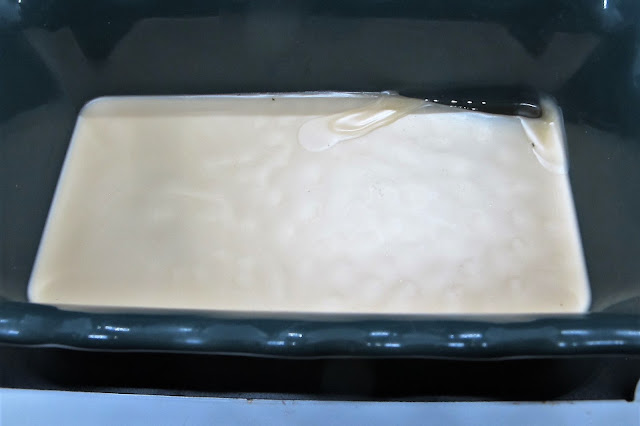 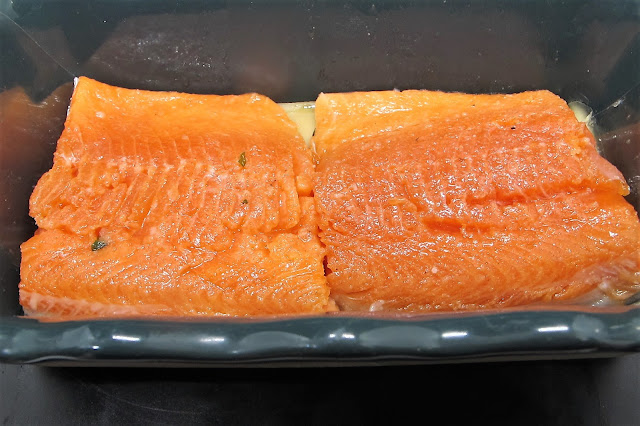 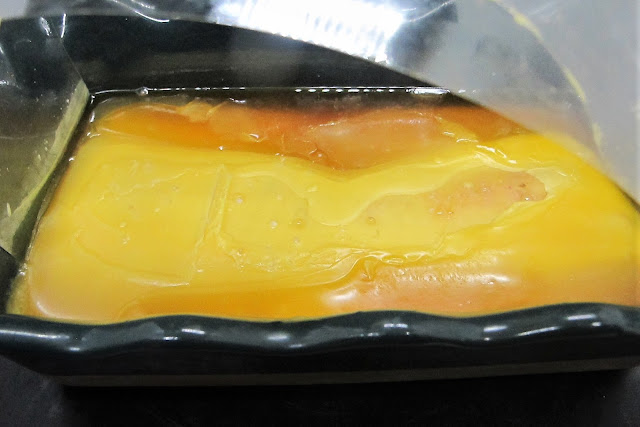 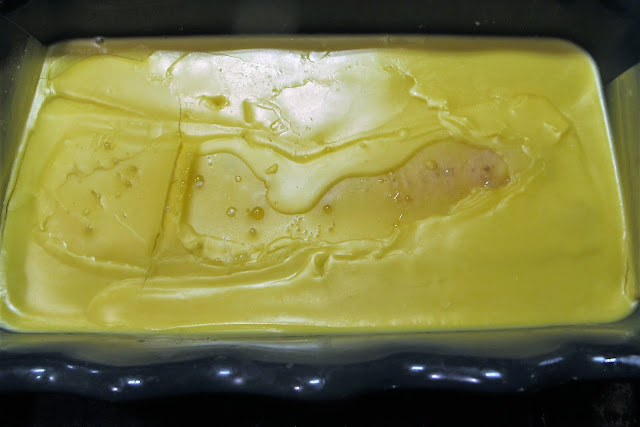 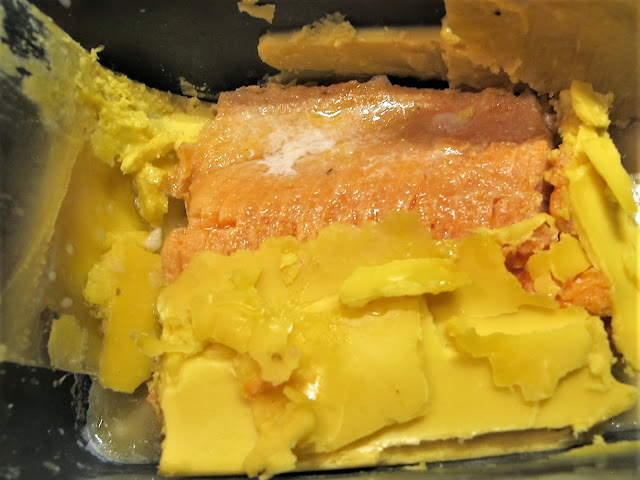