I CANNOT BELIEVE I DID THIS: CHICKEN COOKED IN A BLADDER WITH TRUFFLES

Half mourning chicken steamed in a bladder 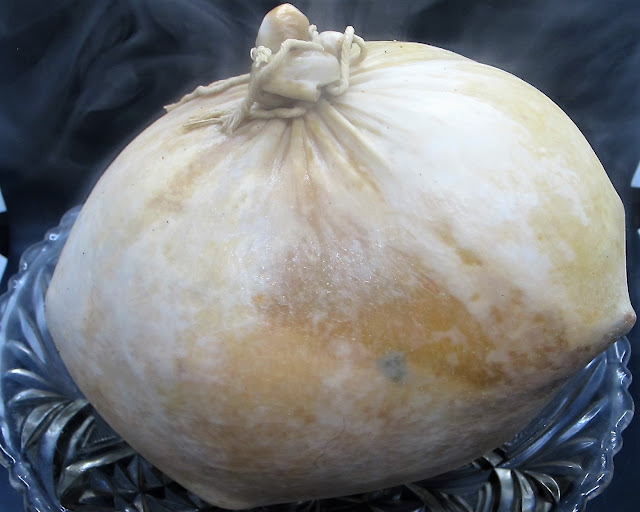 Aka poularde en demi-deuil cuite en vessie, this is an iconic dish of the French cuisine. Invented by the mère Fillioux, taken over par the mère Brazier (the term mère referring to those female chefs running the famous bouchons, i.e. bistros, in Lyon), the dish was made famous by Paul Bocuse as one of his signature dishes, and its tradition continues with chefs like Éric Fréchon and Mathieu Viannay. The chicken is said “half mourning” (en demi-deuil) because black truffle slices are inserted under its leg and breast skin, and it is gently poached and regularly basted in a watertight pig bladder for 60-120 minutes.
Despite this intimidating pedigree, I have been willing to try this recipe for years. As I eventually found dried sow bladders as well as cheap brine preserved summer truffles online, this was the right time, all the more so as there are been some recent Internet blurbs or videos on the topic following the simultaneous broadcast of a “bladder trial” in both the French and American Top Chef programmes.
In fact, it is relatively much easier than what I anticipated… once I was able to sort out the different options proposed: a cooking time range from 40 minutes to 120 minutes (I did 120), puncturing the bladder or not (of course I didn’t), ox bladder or pig bladder (here, I had no other choice than the pig one’s), cooking in simply water or in a broth (as the bladder is supposed to be watertight, the water was both simpler and more logical), which combination of liquids to use in the bladder: Cognac, Madeira, Port, truffle juice (I eventually opted for a mix of truffle juice and chicken neck broth, Port and Noilly Prat, with a twig of tarragon), which stuffing: foie gras, vegetables, other, nothing? (I opted for a stuffing made of a sausage filling, chopped livers, shallots and herbs mixed with bread crumbs and an egg), poaching or not poaching the chicken beforehand (no poaching), blowing air in the bladder with a straw or evacuate as much air as possible (I, rightly, chose the option #2: the remaining air remaining inside the bladder is dilated by the heat)...
I served it with a fricassee of Spring vegetables, mini carrots of different colors, baby turnips, baby zucchini, pencil asparagus, haricots verts, scallions, scape… mostly from the Chef’s Garden, the cooking juice, and with a Burgundy’s Mâcon-Villages. The result was fantastic with the exception of the drumsticks that were undercooked: in fact, this is because, ignoring my preparation notes, I placed the chicken in the bladder withs its legs pointing to the top, i.e. where the temperature is the lowest.
But definitively something to do again, with a chicken but also with fish lie turbot or halibut…
GALLERY 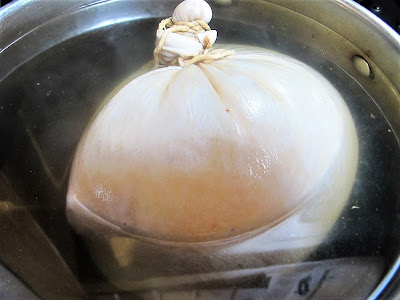 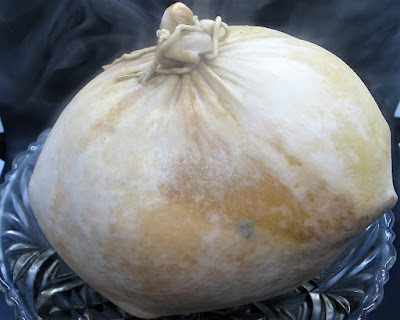 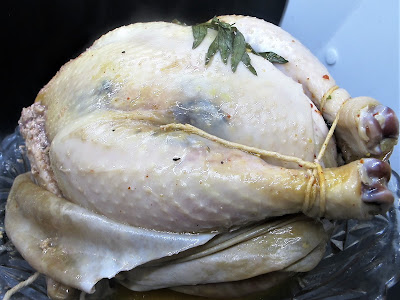 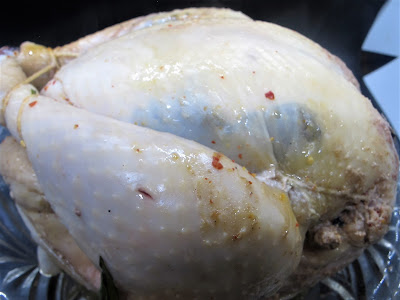 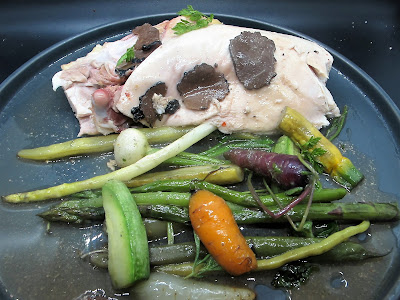