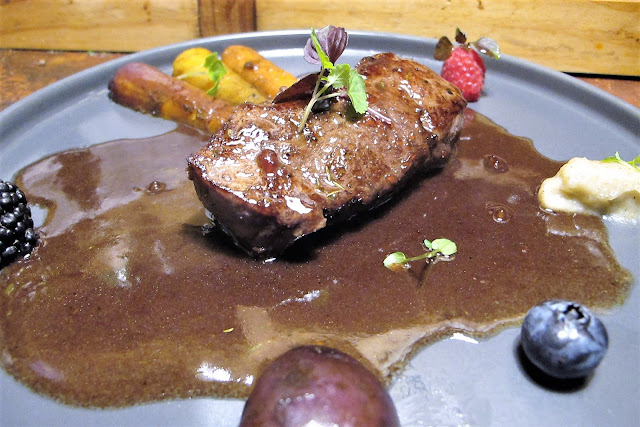 I rarely ate deer, red deer I mean, just a few times as far as I could remember, for instance when my Mom cooked it for Christmas, and I don’t remember having ever cooked it. In fact, the red deer is relatively rare in France, because he needs vast wild territories that France’s density of population and urban sprawl have progressively reduced and limited to some areas in the East or Center of France. His smaller “cousin”, the roe deer, is much more common, with a population estimated at 1.5 million, vs. around 150,000 for the deer. When I immigrated in the USA, I was indeed surprised to see all those beautiful deer everywhere, in the properties, crossing the roads, drinking the water at our pond… In this respect, I persistently keep a moving memory of a sumptuous male deer standing still by the side of a busy road. I was driving my stepdaughter to her school on an early fall morning when we saw a bunch of police or fire department cars on the left of the road. A female deer was just hit by a car and the cops tried, with some difficulties, to finish her off. Just a few meters away from this scene, immobile, like a François Pompon’s bronze statue, a beautiful male deer was looking at it and probably, excuse my anthropomorphism, mourning his mate… Irreal. Ten years later, I still have gooseflesh when thinking of it… Difficult to talk about cooking deer after this memory!

A friend gave us a piece of a young male deer that proves to be the top part of the rear leg, with its bone… Which means that it could be cut in slices and seared like a steak. The iconic sauce Grand Veneur would be ideal to accompany it. The Grand Veneur  (literally, the Grand Huntsman – veneur having the same etymology as venison) of France was the officer in charge of the royal hunt, a very prestigious position then, since reporting directly to the king and accompanying him during his favorite hobby, hunting the red deer! I have found no explanation about how the sauce eponymous was called after the Grand Veneur, but the link is quite obvious.

Practically speaking, the sauce Grand Veneur is one of the several French sauce involving a red wine reduction, sauce Chasseur, sauce Poivrade… and is probably considered as the top one. What characterized the sauce Grand Veneur is the addition of a tart berry jelly jam at the end, traditionally redcurrants, but cranberries, blackcurrants, elderberry are very valuable options too. The sauce Grand Veneur also calls for heavy cream or, optionally, butter. I chose the latter as I estimate that, first, butter is a better binding agent and, second, it gives a brighter aspect than crème fraîche.

I also chose to marinate my deer steaks in red wine, flavored with chopped carrot, onion and celery, and spiced with salt, crunched allspice and juniper berries, thyme, bay leaves… Red wine marinade is generally used with tougher cuts of venison meat, deer, wild boars… in the same way as it is used with the beef cheap cuts or the rooster sturdy pieces, respectively in the boeuf bourguignon and the coq au vin. In each case, the first objective of the marinade is to tenderize the meat pieces. Which was unnecessary in the case of this tender young deer cut. But it also contributes to mitigate the gamey taste of venison that is not appreciated by everyone… I reassure the fan of gamey meat (my case), it is still there…This is why in this recipe, I opted for a marinade… My wine choice goes for a Bordeaux, but any medium of full bodied red wines will make the job: Cahors, Burgundy such as Pommard or the likes… 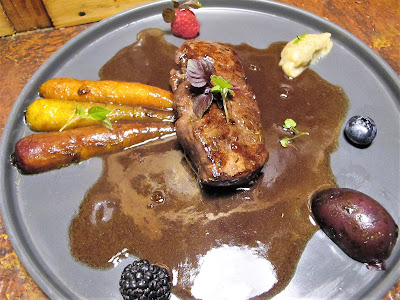 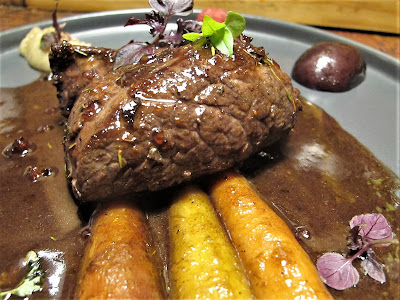