A FANTASTIC EXLOSION OF MARINE FLAVORS AND SAVORS: TARTAR OF OYSTER


Oyster tartar in an oyster water aspic on a bed of blanched scallion, bottarga chips and squid ink tile 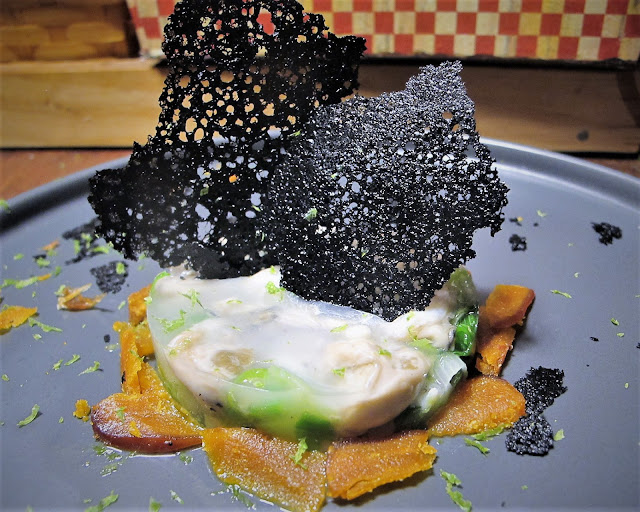 I have been loving oysters since, as a child I spent my summer vacations in Arcachon (South of Bordeaux) first, then in the Oléron island (North of Bordeaux), the most famous spots for oyster farming in France. In France, my only way to eat oysters was raw, with just a few drops of lemon, bread and butter, and a glass of Muscadet or Entre-deux-Mers... if not directly on the rocks for those wild oysters I used to forage at low tide (this is now rightly forbidden to avoid the destruction of those foreshore areas). With this background, I was disappointed by the American oysters that I found less tasty, less iodine-flavored and less salty, as if they are abundantly rinsed in fresh water (that might be the case). So, something unimaginable for me till then, I started to “cook” oysters, such as those oysters gratinéed with sabayon of Loire crémant rosé ot those oysters in their water aspic with watercress. Well, not really and not always to cook them, like this tartar here, but at least to prepare them in a more sophisticated way. That said, don’t misunderstand me, I am absolutely not ready for the Rockefeller oysters… Oysters do not deserve this!

For this original and delicious recipe, I borrowed ideas from different recipes: