Zaâlouk of eggplants, tomatoes and peppers 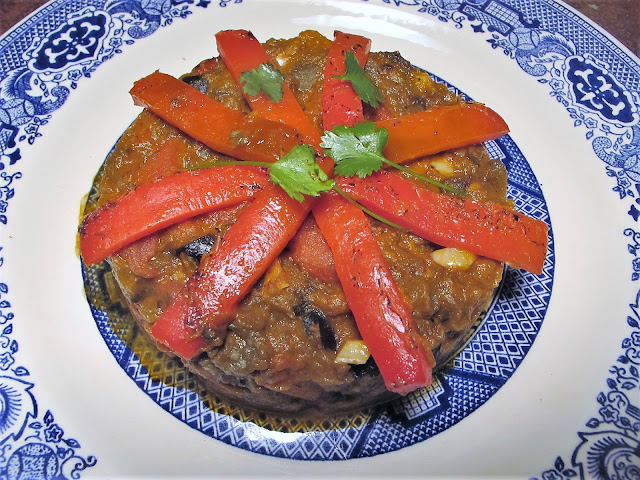 Zaalouk (or zaalouka) is a Moroccan salad, which is also known throughout the Maghreb. In fact, Zaalouk means "purée" or "something soft“, and this is why the eggplant zaalouk is often compared to, and named, the Moroccan baba ganoush (or mtabal), although there are key differences between those two, in terms of ingredients, cooking and texture.
As it is very frequently the case in Morocco (and elsewhere), there are many variations, adaptations, versions… of zaalouk. This is due to the way culinary recipes have been transmitted over the time, orally, through the “dadas”. The dadas are those very gifted cooks, descendants of slaves from Sudan who were serving rich families in the past. Every family of notables had at least one dada, who assumed several functions, being at the same time the cook, the nanny, the housekeeper, the confidante and the guardian of all family secrets. This is how the Moroccan very fine art of cooking and recipes such as Zaalouk were passed from mother to daughter during generations…

Thus, if Zaalouk is often prepared with eggplant, there are several adaptations with other vegetables: pepper, cauliflower, pumpkin... The Moroccan version of this eggplant salad or side dish is prepared with the “usual” Moroccan spices, cumin, paprika, garlic, cilantro… but, depending on the recipe, some grill the eggplant while some other fry it, or some steam it first (as here). Some cook the ingredients separately before merging them, while others cook all at the same time (well, same debate as for the ratatouille!). Some remove the eggplant, others don’t, while a third category (my case) do it fifty/fifty (one stripe out of two). In Fas-Meknas area, for example, dadas grilled red pepper and diced it before adding it at the end of the cooking. Elsewhere, black olives will be added., or raisins, pine nuts… Also, zaalouk can be served warm, lukewarm or cold, as a salad, with flatbread, or as a side with grilled meat or fish. At the dada’s convenience!

Here, my zaalouk involved eggplant, tomato, and bell pepper, based on a reciped by my “dada”, i.e. my friend Choumicha, a TV cooking show host and blogger in Morocco.

And like its cousin the ratatouille, it is even better after 1 or 2 days in the fridge, which gives all the time for the ingredients and the spices to infuse together. A delight! 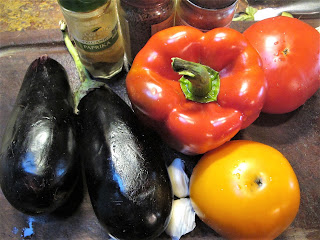 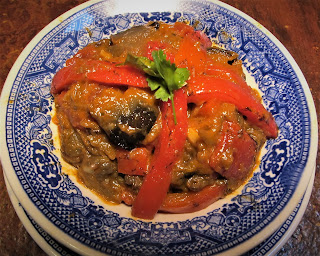