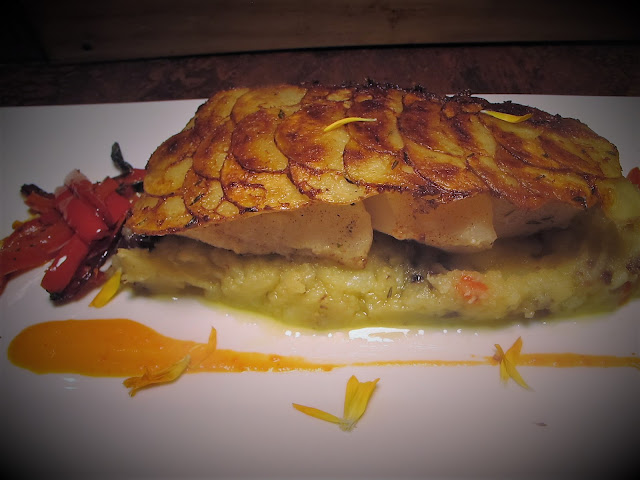 Fish topped by a “skin” of crispy potato scales has become a classic of the French cuisine. This was a technique and a dish (Red mullet dressed in crusty potato scales - see picture below) that Paul Bocuse created some decades ago, and that he highly contributed to popularize, the technique I mean, because as far as the dish is, concerned, it would cost you around $90.00 at the Auberge du Pont de Collonges, i.e. chez Monsieur Paul. Which, incidentally, is not that expensive as compared with dishes proposed by non-starred restaurants and requiring much less work. Just saying…

Of course, my intention was not to recreate, or try to recreate, Monsieur Paul’s dish. The artistic presentation with the ferns made with a veal sauce and the red mullet, a tiny and fragile, the short cooking time of which is antinomic to the time required to cook the potato scallops were a challenge that I was not (yet?) prepared to. I just wanted to use his technique of crusty potato scales on a less tiny fish, although flaky hake is not really the ideal fish. But this is what I had, and I love hake. That said and although it looks spectacular, it is also much less difficult than it seems. But what I realized is that the look is not the most important thing achieved here. This is where you recognize great chefs. The first reason why Bocuse cooked his red mullets that way was, in my opinion, not to look pretty, and it does, but to cook efficiently. The potato skin protects the fish and avoids overcooking it. A bit, a lot in fact, like the technique a BBQ-grilling a non-scaled fish. The scales, either the natural ones or the potato ones, form an armor against the heat… This is a technique of cooking before being an eye-catching trick. Brilliant!!!

I used hake, but almost any other white fish could be cooked that way. If the red mullet is possibly the most technical fish to cook, in scales and intrinsically, but it could be made with fillets of cod, branzino, turbot, snapper, grouper, halibut… and the easiest fish to cook this way is probably the seabass, given its density and its thickness.

I served the hake fillets on fork-mashed potatoes mixed with olives and roasted red peppers, with a red pepper fondue and a red pepper coulis. 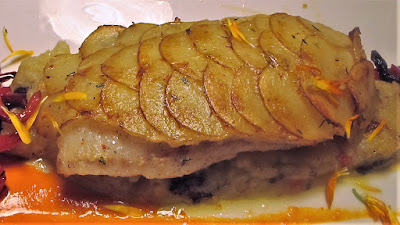 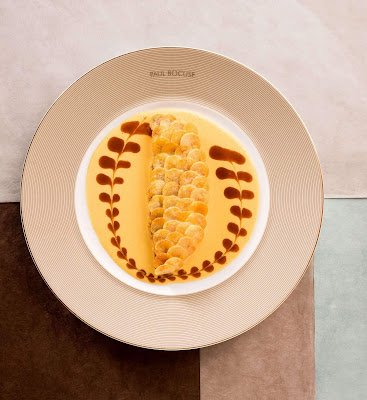