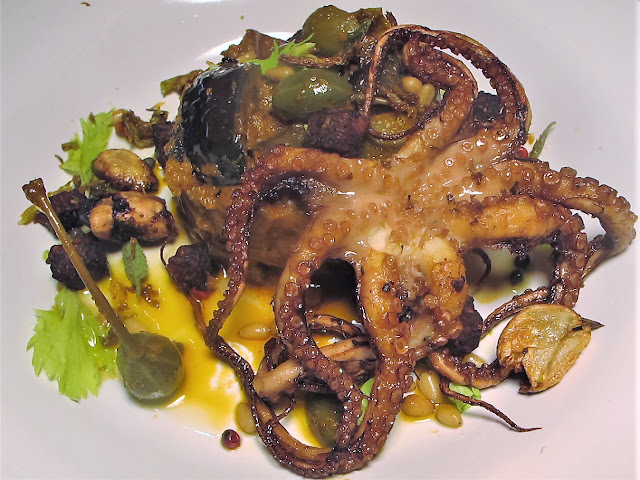 I have been cooking, and eating, ratatouilles and piperades for so long, and I even made a patlıcan güveç (the Turkish " ratatouille" ) a couple of years ago, as it was surprising that I never tried the Italian caponata. I never tried it, meaning that I never cooked it and, although I have been many, many times in Italy (but never in the South beyond Rome), I never ate it! This is corrected now.
Since I never tasted one, I stick to the recipes I saw, mainly from Sicily: draining the eggplant in salt, and frying them apart after having rinsed them, making my own tomato coulis, blanching the celeri, cooking the onions and the celeri apart, adding the tomatoes, 2 tbsp. of wine vinegar, and then the eggplant, and letting simmer for at least 1/2 hour. Since there were some minor differences between them, caper or caperberries, with or without pine nuts... I included everyting! Capers, caperberries and pine nuts, I adore those three. My other twist was to add some herbs and spices, thyme and piment d'Espelette mainly, as I was suprised to see that the 3 or 4 recipes I watched were not calling for herbs, except for those added at the end. Again, I didn't have any benchmark, but this was delicious. So, I guessed that I was not too far from the traditional outcome.
I served it cold, after it rested a full day in the fridge and, like for ratatouille, it allowed all the flavors to develop and to "join their forces". I sided it (rather this way than the usual way where the protein is sided by the vegetables) with a small octopus, fried in olive oil with pepperoni dices, garlic and herbs. This was delicious, but I am repeating myself. 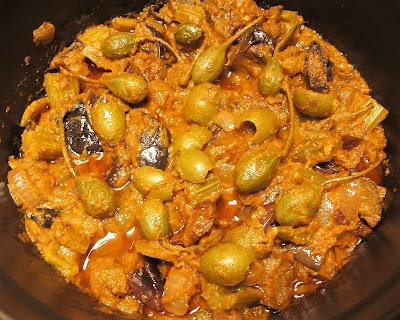 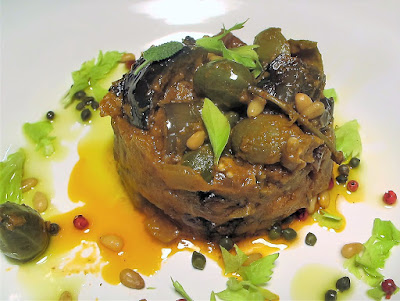