A SPECIALTY FROM ALSACE: MUNSTER PIE 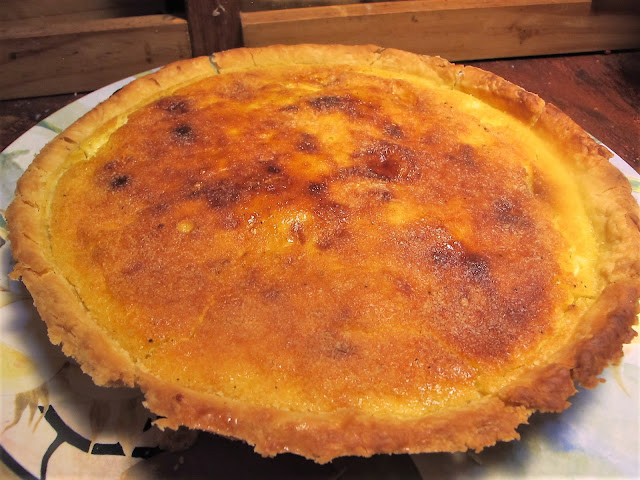 How do I know that this Munster came from Alsace? Well, first, like for the Port-Salut, this is written on it: "Munster au lait d'Alsace". But the spelling gives also a clue. The French "Munster" is spelled without an "e" after the "u", as it comes from the city of Munster in Alsace, while the "Muenster", with an "e", is an American cheese. In any case none of the Munster or the Muenster has anything to do with the German city of Münster, with the diaeresis on the "u". That said, it is likely that all those Munster with/without an "e" or a diaeresis refer to the term monastery or its latin root.
Thus, the Munster comes from Alsace, or exactly from the Vogesen mountains, a small mountain chain separating Alsace from Lorraine. By the way, Munster cheese is also fabricated on the Lorraine side under the name of Geromé (from Gerardmer), where my Mom's family is from.
This tarte is very easy to make. First, the crust is made from "pâte brisée", the simplest possible crust: 250 g of flour, 125 g of soft butter, 1 yolk, and a tiny bit of water as necessary, a tiny bit of salt, and a minimum 1-hour rest in the fridge.
The filling (we call it migaine in Lorraine) is also as simple as ABC. A- 240 g of cheese, B- 240 g of crème fraîche, C- 240 g of eggs, i.e. 4 whole eggs. I didn't salt as the Munster was quite salty and my crust was salted too. I just added some grated nutmeg and some black pepper. A little originality though. The tarte au Munster could be either a savory dish or a dessert. In the latter case, sugar is added in the pastry, in the migaine, and finally on the top. I played it in-between. No sugar in the crust, but a tsp. of sugar in the migaine and some powdered sugar spread on the top at the end. It didn't reall sweeten the pie, but it brought it the perfect roundness to balance the pungent cheese. 40/45 minutes later, in a preheated 360 F oven, the pie was ready... well almost, as it is generally better to eat it cold or lukewarm.
For this Alsace's dish, a bottle of Alsace's Gewurztraminer was the perfect match with the Munster cheese, and also with the tartelette aux brimbelles (blueberry tartelet) that I decided to make with the dough leftover...
The time of this beautiful lunch, I was sent in the Vogesen and my childhood memories...
Alsace entree Lorraine starter