A SPECIALTY FROM…. THE BASQUE COUNTRY: THE PIPERADE 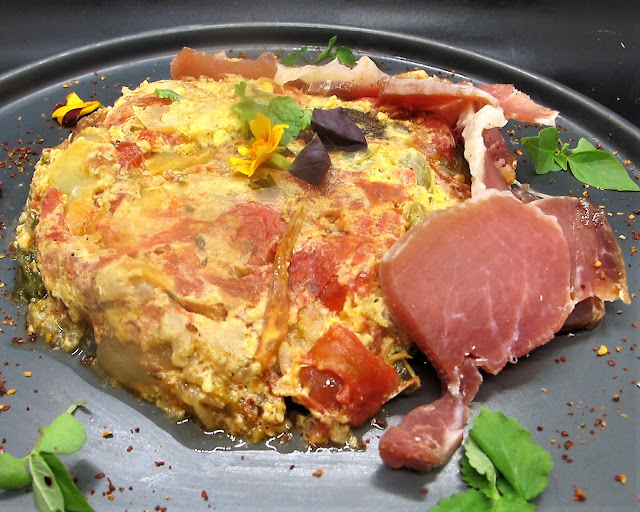 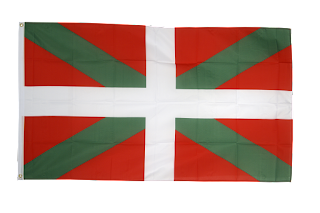 Yes, the Basque country flag (aka ikurriña) is in your plate. Red, white, and green. It is your guide for the recipe: red like tomato, white like onion, and green like chili pepper. As you know, the Basque country is a region with a very strong national, if not nationalistic, feeling overlapping France and Spain on each side of the Pyrenees. The main part (75%) of the Basque Country is in Spain (main city San Sebastian), whereas the French part represents, you have guessed, 25%. The main city is Bayonne, famous for its cured hams that are almost nothing shy of the Spanish Jabugo hams. I will talk here about what I know, the French Basque piperade, given that the Spanish piperrada seems very similar. I would say that the difference relies much more on what the piperade or the piperrada is usually served, white fish and tuna fish in Spain, and Bayonne ham and eggs in France, not mentioning the Poulet à la basquaise (Basque way chicken) which technically is a chicken stew cooked in, and sided by, a piperade …

Piperade, in French, Piperrada in Basque and Spanish, is a Basque dish basically made of peppers, tomatoes and onions. Pepper, piperade/piperrada… the connection seems obvious. It is indeed, since pepper translates by piper or biper in Basque… But there is a trick. Both, the Basque piper and the English pepper designate three different vegetables even though they are “cousins”, where the French uses three different words:
1) the spicy pepper corns (poivre in French), in all their varieties, white, grey, black, pink (which technically is a berry), Szechuan, Timut (with its so characterized grapefruit taste)… 2) the bell peppers (poivron), either green, yellow, red, orange, purple, variegated
3) the chili peppers (piment), divided, and organized according to their SHU, in mild, medium, hot… peppers.

The piperade is made with number 3), i.e. the piment, the mild chili peppers, although there are some non-basque versions made with the poivron, the bell peppers. In fact, it is very likely that, if you order a piperade in France elsewhere than in the Basque countries, and let’s say in too rare restaurants in Paris and other big cities operated by a Basque chef, you will get a bell pepper piperade… which I call the Parisian piperade. The only difference between those two cousins, the chili pepper and the bell pepper, is their taste, the chili pepper is stronger, has more astringency than the bell pepper (at least the bell peppers of today, because those of some decades ago were stronger). It is also thinner. Now, let’s be honest, a Parisian piperade made with bell peppers of different colors is visually very attractive and excellent, but taste-wise, nothing beats the original  Basque dish… and don’t misunderstand it, I am not Basque at all!

... and the right green
Green is the mild chili pepper. The French piperade is traditionally made with “piment d’Anglet”, a local variety of mild (0 SHU) chile pepper of a beautiful bright medium green color. Of course, I didn’t find piment d’Anglet here in Ohio, so I generally use Poblano or Anaheim peppers, and sometimes a mix of those two. In the recipe featured here, I used Poblano. Based on my modest experience, Poblanos could very be mild (close to 0 SHU) up to a bit spicier (1500 SHU), which is still moderate. However, since the Basque piperade calls for piment d’Espelette (a dry hot red pepper), taste your Poblanos or other “local” peppers before adding piment d’Espelette (it could be found in the US) or other pepper… 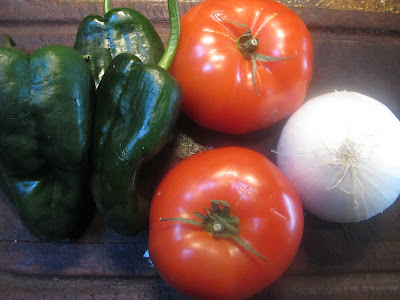 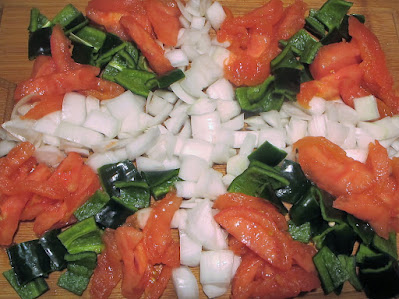 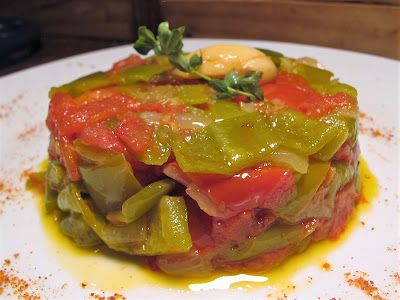 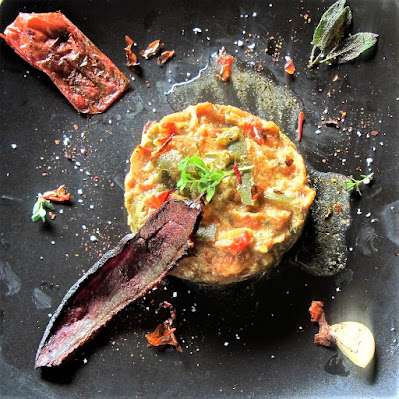 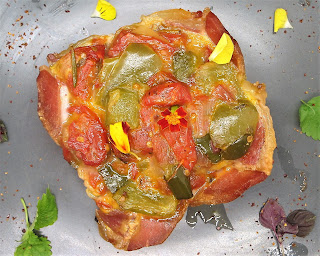