A SPECIALTY FROM PROVENCE: THE TIAN PROVENÇAL

Copy 100 times, little Rat: The tian is a roast, the ratatouille is a stew 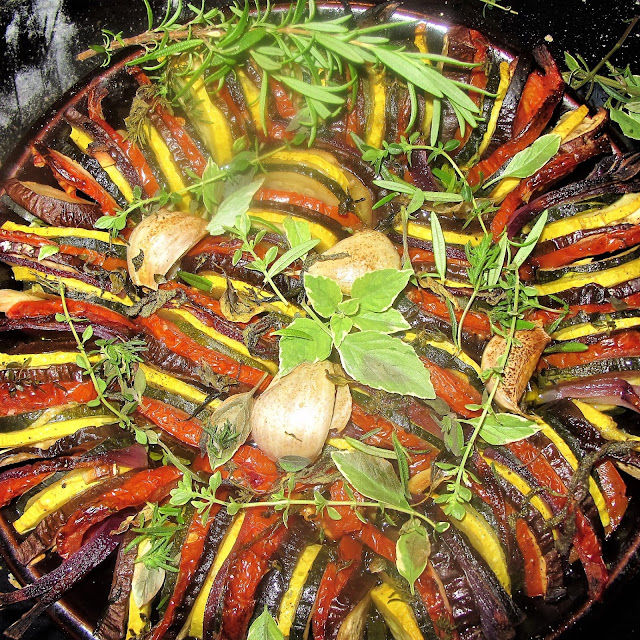 THE TIAN IS NOT A RATATOUILLLE
Yes, it is true, the tian is ratatouille’s cousin as they share almost the same ingredients. Though, unlike the ratatouille, the tian doesn’t include bell peppers. Also, if we were talking about meat, the ratatouille would be a stew whereas the tian is a roast. So, unlike what this little rat in the Disney movie want us to believe, a ratatouille is not a tian Provençal, and vice-versa!

FIRST OF ALL, TIAN IS A DISHWARE:
First of all, ‘tian’, like terrine, tajine (those 3 words having the same Greek root) or cassoulet, refers to the dishware, in terracotta, where the dish is cooked. The tian generally refers to the tian Provençal. The word tian itself comes from the Occitan language originally spoken in the whole South of France, and of course in Provence. One can find various recipes for Tian, including cheese gratin, potatoes, or rice, but the genuine tian doesn’t include any of those. In fact, it is the ratatouille’s cousin, as both share almost the same ingredients, except that, unlike the ratatouille, the tian doesn’t include bell peppers (although I sometimes place some bell pepper stripes on a tian, which adds some interesting taste and some colors if you play with all the bell pepper colors available). But the big difference is that the ratatouille is a stew whereas the tian is a roast, so to say.
Therefore, to make a tian, you first need a tian! But don’t worry, if you don’t have one, any low wall oven dish will make it. You can use a square dish, a rectangular dish, or a round dish. But although it is a little bit trickier to prepare the tian in a round dish, it is also more beautiful, and it respects traditions, since the tian is initially a round dishware.

TIAN PUTS PROVENCE IN YOUR PLATE
For the tian you need tomatoes, eggplant, zucchinis, and yellow squashes in the same quantity, since the ‘game’, and indeed the only trick, is to alternate a slice of tomato, a slice of eggplant, etc. The important thing is to use, as much as possible, vegetables with a similar diameter and a consistent diameter on their whole length (i.e. tube-shaped, so to say, instead of ball- or pear-shaped vegetables). It is easy to understand why. This is why, as much as I can, I use small eggplants, medium size zucchini and yellow squash, and oblong-shaped tomatoes, such as Roma tomatoes for instance. You also need garlic, onion, olive oil of course, salt, pepper, and a tiny bit of parmesan (optional, and surely not to make a gratin, but rather to ‘salt’ the tian).

Also, very, very important, herbs, the famous herbes de Provence. And since the tian is a summer dish, fresh herbs of course. Depending on what you find or have in your garden, thyme, marjoram, savory, rosemary, basil, sage and also play with the different varieties (lemon thyme, thai basil, etc.)… There is no rule. Well, there is just one, a logical one. Put the succulent herbs (thyme, sage, rosemary, bay leaf…), those supporting being cooked, at the beginning, and just spread the other ones (marjoram, savory, basil…) at the end before serving.  All those herbs really give a kick to this dish.

Like ratatouille, it’s a very versatile dish. You can serve it with lamb chops, grilled chicken, a steak, grilled tuna fish, a slice of Prosciutto. Personally, I ALSO like to serve it with a SIMPLE poached egg that I continue to baste in the plate with the tian juice… And of course, with the tian Provençal, there is nothing better than a Rosé de Provence, a perfect match…
Gallery 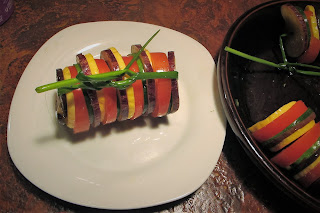 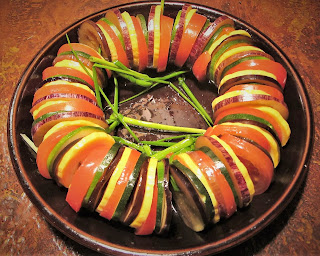 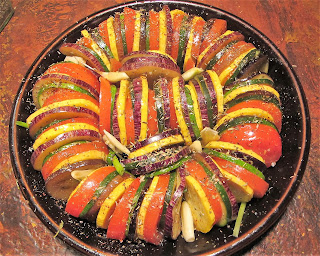 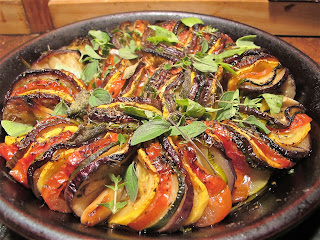 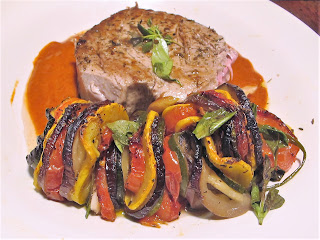