SWEETBREADS AND MORELS: THE PERFECT MATCH 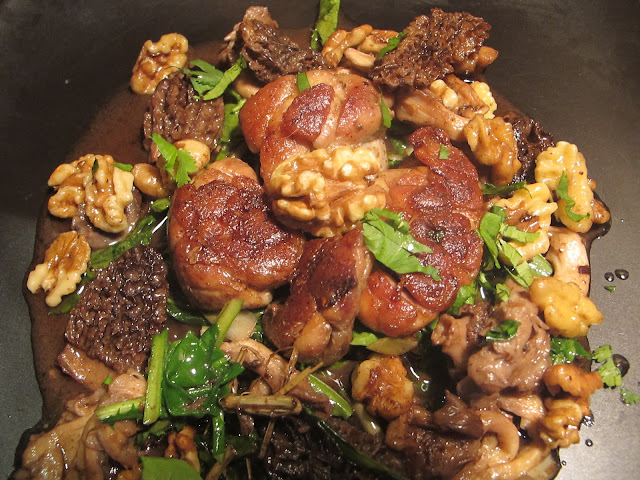 Sweetbread is the thymus, i.e. a lymphoid organ that is found only in young animals like calves and lambs. Unlike other organs such as liver or kidneys, which I love too, sweetbreads have a more subtle taste. Another offal with which it is often compared to is the brain. But as much as I love sweetbreads, I am not a great fan of brain (euphemism). Probably because of bad memories of my childhood school canteen (including finding raw brain pieces in my salad!!!), and also because brain is not really tasteful and its texture is a bit too "soft" for me. In fact, veal sweetbreads, which are the most common ones to be found, ares much more expensive than veal brains and are considered as a luxurious dish in France, like foie gras and other similar delicacies.

Sweetbreads pair very well with mushrooms, and "ris-de-veau et morilles à la crème" (sweetbreads, morels and crème fraîche) is a great staple of the French gastronomic universe, where the sweetbreads are cooked "meunière" (which means coated with flour, hence the term meunière, and gently fried in butter, under the butter smoking temperatue, aka "beurre noisette" or "hazelnut butter" in reference of the blond color taken by the butter) and served with a crème fraîche sauce. This might be considered now as a bit old fashioned currently. but it is so delicious and delicate.
As I had frozen sweetbreads from D'Artagnan and some dried morels (not fresh, alas!), I decided to associate those two in a more modern combination without crème fraîche and without "meunière". In fact, the specialty of a famous celebrity chef in France is to cook his sweetbreads on a bed of walnut shells. I didn't have walnut shells, but I had walnuts. Plus, it was so obvious for me that those two, the sweetbreads and the walnuts are made for being together: look at their shapes! Also, I didn't cook the sweetbreads meunière, but I seared them "as is" (no flour coating) in walnut oil at low temperature for around 40 minutes "à l'unilatérale", i.e. on one side only, so that this side formed a nice crispy crust while the whole sweetbreads is uniformly cooked and soft inside.

Before searing my sweetbreads, I had to prepare them and this is somehow the issue with this offal. It takes time and work. The preparation that should take place at least 12 hours in advance, and optimally 24 hours, consists in a series of steps (see below). But honestly, this “sweet” is worth the sweat… 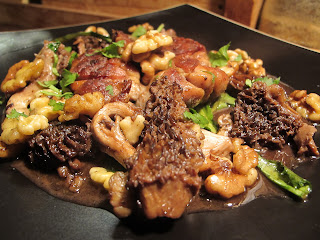 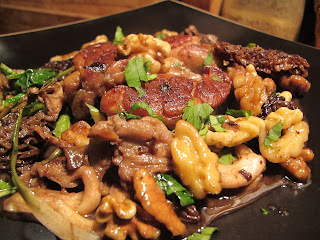