Where poaching a salmon is not a way to cook it 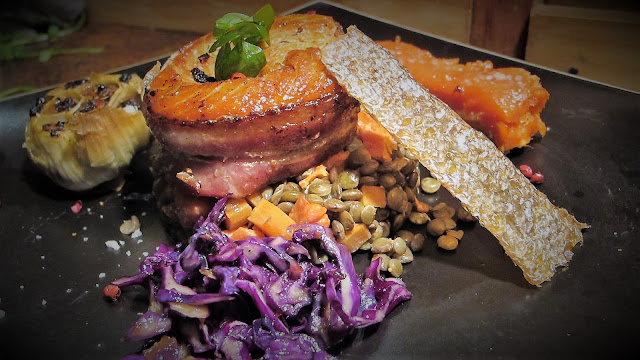 Meal in the European capital of river salmon
I am frequently amazed by the persistence of the olfactive and gustative memories… Something like 35 years ago, as I was at the very beginning of my professional career, I was working as a consultant in a firm depending from the French Ministry of the Industry, the role of which was to support industrial SMBs in all the French territory, and sometimes in Africa (I will probably come back on this for another persistent food memory). Thus, I was to intervene in companies restructuring and reorganizing, using the French equivalent of Chapter 11, and also, I was specialized in finance, to complete company valuations in a view of a sale or an acquisition. As such, one year, I was sent for a 6-month mission in Auvergne, a central small volcanic mountain area, with breathtaking landscapes. If you have the opportunity, I urge you to visit this region for hiking around its beautiful volcanic lakes and discovering some old cities and villages… Brioude, on the Allier river, is one of those and I discovered this small medieval city as I was to assist a SMB of the area in valuating the company and finding a purchaser. Pomel, this was its name, was a fabricant of chimney flues and other technical products made in clay. At this occasion, Monsieur Pomel, the company’s owner invited me in the small restaurant of one of his friends in Brioude. He was to invite me again several months later, in a famous restaurant in Paris and favorite of the then French president François Mitterrand, to celebrate the sale of its company to a big group at a price in line with my valuation. But this is another story. Thus, Pomel’s friend in Brioude served us a dish that I will always remember. As you have guessed: salmon, green lentils and garlic. Le Puy-en-Velay, the city famous for its green lentils is only 30 miles away from Brioude. And Brioude has long been known as the European capital of salmon angling.

Salmon migrations
In fact, Atlantic salmon, a magnificent fish, used to migrate up all main West European rivers, from the North of Portugal to the Arctic Circle. Nowadays, they have disappeared from all big rivers, except from the Loire and its main tributary the Allier. And Brioude had long been known as a capital of salmon angling. Although the flow of salmons that used to migrate every year through those two rivers has been dramatically reduced, because of the constructions of dams aiming at controlling the very impetuous Loire river overflooding, efforts have been made to save this migration, such as, for instance, the construction of salmon lifts to go through the dams. Although insufficient, this  makes the Loire-Allier salmon a unique fish in Europe. It is now the last genetic stock of large wild salmon which can be used for reintroducing the species on other large rivers in France and Europe (Rhine, Garonne, etc.). If fishing salmon is now, rightly, totally forbidden in the Loire-Allier area, back in the 80’s, it was still possible to find some and restaurants were authorized to buy a certain limited quota… This is why I like to say that this Brioude’s salmon was a poached salmon, and I am mot referring to the way to cook it. 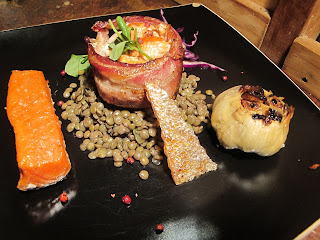